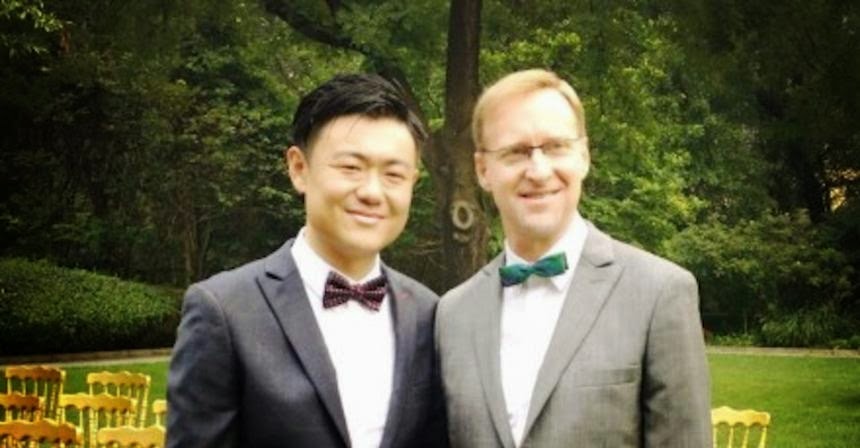 When U.S. television star Neil Patrick Harris announced September 8 that he had married his partner of 10 years David Burtka in a ceremony in Italy, it blew up on Twitter. The post, which included the Harris quip "we put the 'n' and 'd' in husband," clocked nearly 30,000 retweets and close to 60,000 favorites within a few hours. Over in China, it was the Sept. 6 wedding of a British diplomat and his American boyfriend in Beijing that was going viral on social media. 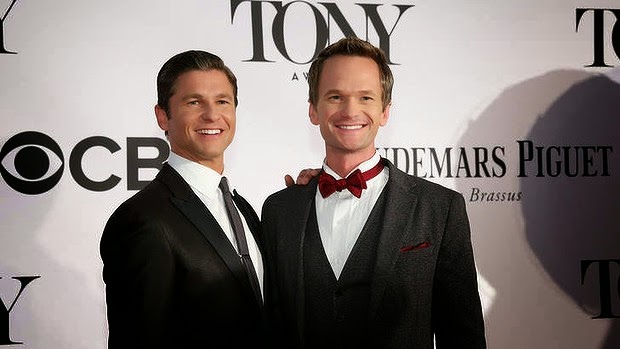 It wasn't a celebrity wedding, but it was big news because gay marriage is not legal in China. Nonetheless, the union of Shanghai Consul General Brian Davidson and his boyfriend Scott Chang, a U.S. citizen, was binding because it occurred at the residence of British Ambassador Sebastian Wood -- sovereign British territory. A post by Davidson with the hashtag #Love is Great featuring photos of the bowtie-wearing couple drew more than 33,000 likes and nearly as many shares on China’s own version of Twitter, Weibo.

It also contributed to a swirling debate on whether China should legalize gay marriage. Homosexuality remains taboo in many spheres of Chinese life; there is even a bustling business in clinics that claim to cure homosexuality with electroshock therapy and hypnosis. There have been no signals that Beijing is considering revising its marriage law.

But Chinese society -- particularly its web-savvy youth -- is becoming increasingly tolerant of same-sex unions.
In a poll launched Sept. 7 on Weibo, more than 89,000 people voted in favor of same-sex marriage, while just 8,000 opposed it.

Reactions to Davidson and Chang's wedding on Weibo mirrored that ratio, with the vast majority of commenters wishing the couple well. One man in the southwestern city of Chengdu wrote that legalizing same-sex marriage said a lot about a country's progress on human rights and the rule of law. He said that the wedding at the ambassador's residence would be a "good example" for China and that he hoped the day would come when such unions were legal in China too. On September 7, Davidson retweeted the Chengdu man's message to his nearly 40,000 Weibo followers. In his own announcement a day earlier, Davidson had written that he was “very proud" that U.K. law allowed him to marry whomever he loved.

More than 20 British missions worldwide are able to conduct same-sex marriage as long as the host country doesn't object. Although Beijing has yet to object, Hong Kong already has, making same-sex unions at the consulate there impossible, according to Hong Kong newspaper South China Morning Post. This is surprising, given that the self-governed Chinese territory has long been considered a bastion of Western-style civil liberties relative to Mainland China.

Friends of Davidson and Chang, as well as the ambassador himself, posted numerous photos and congratulations on the wedding -- a social media blitz that blended advocacy and celebration. Wedding guest Wei Xiaogang, the founder of Queer Comrades, a Beijing nonprofit group focused on raising awareness of LGBT issues, noted that the wedding had caused "quite a stir" online. He uploaded a collection of more than 40 photos of the wedding including a shot of the program emblazoned with the words "Keep Calm and Marry On" and one of the couple cutting into a three-tiered wedding cake decorated with a cascade of colorful fondant bowties. Also present: a bagpiper.
Meanwhile, a few naysayers groused about the ceremony online. One Beijing man wrote that same-sex marriages could imperil family ethics and social stability. He added that gay parents would be more likely to have children with "personality issues." Another Weibo user from Chengdu wrote that same-sex marriage was “abnormal, yet we insist on calling it true love."

But the majority of posts welcomed the wedding news. One man in Beijing compared the struggle for same-sex marriage rights to movements for women's voting rights and equal rights for minorities. He added, “Homophobes and morality police can only be part of a backward group in history that obstructs the progress of humanity."

Another man from the city of Shenyang in China's northeast wrote that he was glad to see "many reasonable people criticizing the homophobes." He clarified that he personally didn't like gays one bit, and that they made him uncomfortable. "But I have always supported each person's right to choose their own lifestyle, to pursue their own happiness, to pursue their own true love," he added.
State media stated in a very brief news report that Chang's father expressed similarly conflicted sentiments at the ceremony. The web portal of the state-run Beijing Youth Daily reported that the father, who wasn't identified by name, said that his son's choice ran counter to his own tradition. “But I still extend him the greatest blessings.”
ALEXA OLESEN
foreignpolicy.com

Weibo/Fair Use
Over 5Million Reads Adam Gonzalez at September 09, 2014