Almost every man alive can trace his origins to one man who lived about 135,000 years ago, new research suggests. And that ancient man likely shared the planet with the mother of all women.
The findings, detailed today (Aug. 1) in the journal Science, come from the most complete analysis of the male sex chromosome, or the Y chromosome, to date. The results overturn earlier research, which suggested that men's most recent common ancestor lived just 50,000 to 60,000 years ago.
Despite their overlap in time, ancient "Adam" and ancient "Eve" probably didn't even live near each other, let alone mate. (The 10 Biggest Mysteries of the First Humans)

PHOTOS: Faces of Our Ancestors

Can We Evolve Without Competition?
Can evolution occur without a competition between animals, fighting to survive?

"Those two people didn't know each other," said Melissa Wilson Sayres, a geneticist at the University of California, Berkeley, who was not involved in the study.
Tracing history
Researchers believe that modern humans left Africa between 60,000 and 200,000 years ago, and that the mother of all women likely emerged from East Africa. But beyond that, the details get fuzzy.
The Y chromosome is passed down identically from father to son, so mutations, or point changes, in the male sex chromosome can trace the male line back to the father of all humans. By contrast, DNA from the mitochondria, the energy powerhouse of the cell, is carried inside the egg, so only women pass it on to their children. The DNA hidden inside mitochondria, therefore, can reveal the maternal lineage to an ancient Eve.
But over time, the male chromosome gets bloated with duplicated, jumbled-up stretches of DNA, said study co-author Carlos Bustamante, a geneticist at Stanford University in California. As a result, piecing together fragments of DNA from gene sequencing was like trying to assemble a puzzle without the image on the box top, making thorough analysis difficult.
Y chromosome
Bustamante and his colleagues assembled a much bigger piece of the puzzle by sequencing the entire genome of the Y chromosome for 69 men from seven global populations, from African San Bushmen to the Yakut of Siberia.

By assuming a mutation rate anchored to archaeological events (such as the migration of people across the Bering Strait), the team concluded that all males in their global sample shared a single male ancestor in Africa roughly 125,000 to 156,000 years ago.
In addition, mitochondrial DNA from the men, as well as similar samples from 24 women, revealed that all women on the planet trace back to a mitochondrial Eve, who lived in Africa between 99,000 and 148,000 years ago — almost the same time period during which the Y-chromosome Adam lived.

Discovery.com
Over 5.6 Million Reads Adam Gonzalez at August 04, 2013 No comments: Links to this post

Email ThisBlogThis!Share to TwitterShare to FacebookShare to Pinterest
Labels: Procreation

Does seven to fourteen days really make that big of a difference in the grand scheme of things?  Well, it does if you are a Republican presidential contender trying to woo social conservatives to your side. 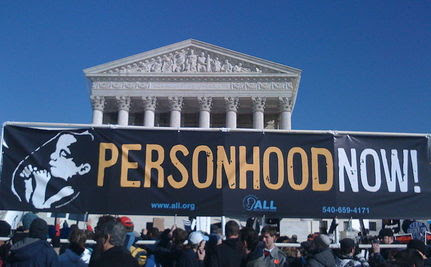 One of the largest pushes in the anti-abortion activists groups this year has been for state constitutional amendments defining life as beginning at the moment that an egg is fertilized.  This push to redefine “personhood” has been rejected by the voters in every election contest it has come up in, yet still most anti-choice activists refuse to consider any bill that stops shy of saying that conception equals an entirely new person which should have every legal right and protection that a fully born human receives.
Presidential candidate Newt Gingrich is taking a very slightly more moderate approach to the issue, and stating instead that life begins at the moment of implantation — or roughly 7-14 days after fertilization, once the fertilized egg implants in the uterus.  There is a myriad of reasons why this makes much more sense, not the least of which is that fact that science defines pregnancy as not occurring until after implantation.  Ask any woman who has undergone IVF if she is pregnant simply because she has a dish of fertilized embryos, and she’ll tell you bluntly that getting those embryos is often the easy part, and she’s still a long way from being pregnant.
Defining life as beginning at implantation would likely be a huge asset for anti-choice activists wanting to pass “personhood” bills that would in essence ban abortion, as it would get rid of a number of complications that come from the fertilization definition.  It would no longer interfere with IVF procedures, it wouldn’t compromise some forms of birth control, and it would still eliminate abortion long before a woman would know she was pregnant.  After all, your body doesn’t even begin secreting the hormones that show on a pregnancy test until after implantation, and a vast number of fertilized eggs simply don’t implant, meaning the woman was never technically pregnant.  How can life have “begun” and be “protected” if a pregnancy hasn’t even started yet?
But their end goal isn’t just to ban abortion — it’s to also ban birth control, infertility treatments (unless you allow your additional embryos to be put up for “adoption” for strangers to use, or keep them frozen indefinitely), stem cell research and all of the rest.  And that is why candidates like Michele Bachmann are saying that Gingrich’s stance is simply not “pro-life” enough. “The statement made today was highly troubling. Life begins at conception…This, along with his inconsistent record on life, is just one more indication that Newt is not dedicated to protecting the lives of the unborn and doesn’t share the most basic of conservative principles.”
Can Bachmann, Rick Santorum and the like really turn a one week difference into a policy that can oust Gingrich from winning the nomination? They are most definitely trying to do so.

I am more than happy to post on this day two articles from care2.com.  It’s been years that I have been writing and posting on their site and then posting their articles on my site. Once you register with them you get points that you can turn into $ for non profit civil causes. They range from the 'Environment to LGTB rights'. You can click on the post and it will take you there. I recommend their news letter very strongly. Thank you for reading and thank you care2.com…….      adamfoxie*