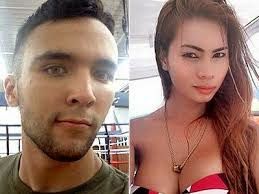 An expanded US military presence in the Philippines was one of the initial features of President Obama’s pivot to Asia, which was intended to rebalance US interests and resources toward the Pacific and reaffirm the US role in the region’s security.
Now the uproar in the Philippines over a US Marine’s alleged murder of a transgender woman is reigniting opposition to a stepped-up American military presence.
The case is once again placing a spotlight on a point of contention that has long accompanied US basing overseas: tensions over US personnel on leave in local communities.
Filipino prosecutors on Monday charged the Marine, Pfc. Joseph Scott Pemberton, with murder in the October death of Jennifer Laude, a transgender woman formerly known as Jeffrey. Officials contend Private First Class Pemberton became enraged when he discovered Ms. Laude was transgender.
Statements from witnesses and several fellow Marines said that during a night of bar-hopping in Olongapo, a center of nightlife near the Subic Bay naval base where 3,500 US troops were on hand for joint exercises, Pemberton met Laude and a transgender friend and went to a motel room with the two women. Laude was later found dead, strangled and drowned in the motel room toilet.
When he reported back to his ship, Pemberton confided to a fellow Marine he’d gone out with that night, “I think I killed a he/she,” according to the fellow Marine’s statement.
The murder has spawned protests led by members of Laude’s family – and joined by the Philippines’s anti-US left wing and transgender rights groups. They say they fear the Filipino government’s focus on improved relations with the United States will result in special treatment for Pemberton and dash their hopes of seeing justice done.
The US, on the other hand, is taking steps to ease tensions over the murder case. After Pemberton’s detention on a US military ship produced rumors that the accused had been (or could be) whisked away to the US, American officials agreed to his relocation to a Filipino military base in Manila, where he remains in US custody though with some Filipino guards.
The Laude murder case is reminding Filipinos of past crimes committed by US service members in the country. More broadly, the case is serving as fodder for critics of US military installations who say that cases of rapes and other crimes by US military personnel in Japan and South Korea are further proof of the harmful social impact of foreign military installations.
In April, America and the Philippines signed a 10-year agreement under which the US will not have its own bases in the Philippines, as it once did, but will rotate into Filipino installations.
Opposition in Japan to the postwar US military presence was evident in the weekend’s national elections, when Prime Minister Shinzo Abe’s ruling Liberal Democratic Party lost all four district seats in Okinawa over Mr. Abe’s plan to build a new US Marine base there.
Abe is also seeking to latch on to the US “rebalance” to Asia by strengthening ties to the US military.
Local opposition to the US military presence on Okinawa was already a fixed irritant in US-Japan relations but intensified after the 1995 rape of a 12-year-old schoolgirl by US service members. Another rape case in 2012 fanned old flames.
The US and the Philippines have been cautiously courting each other for more than a decade, after an earlier Filipino government kicked the US out of its Subic Bay base in 1992. Attempts at increased military cooperation were set back in 2005 when another Marine was found guilty of rape in a Filipino court.
In that case, the Marine was sentenced to life in prison and was imprisoned until his accuser recanted several years later. But resolution of the case only raised suspicions in the Philippines of some kind of deal when it was learned the accuser was given a visa to go live in the US.
Under Filipino law, local authorities can request that the US turn over Pemberton to Filipino custody while his case is adjudicated. Such a request could add to the rising tensions in US-Filipino relations.

csmonitor.com
Over 5Million Reads Adam Gonzalez at December 16, 2014 No comments: Links to this post