Russia's Strongman Putin Says:"I'm Not a Woman so I don't Have Bad Days" 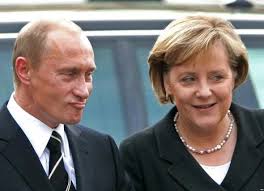 To make a statement like that one has to be pretty mentally obscured. He (Putin) wanted to say he is better than a woman because he is Putin, a man,  so he gets no bad days!

I think he had a pretty bad day when President Obama together with Congress slapped the latest restrictions on oil and the sanctions on the bank he uses to do financial transactions internationally. Without Exxon who owns the deep sea equipment to get the oil out and the bank to move all of Putin's large amount of money to keep the oil flowing and being sold, He is not having a good time!

As matter of fact if Trump has a complete breakdown, or is impeached or even if we get to 2020 without all the above, it is very unlikely that congress will agree to get those sanctions lifted during all that time and once Trump is gone Putin better have another real bad day and start behaving himself like "a Virgin, for the very first time"  (Madonna).

After this week's ex FBI Director Comey's testimony to congress will certainly give us an idea of the obstruction of justice charge and if there is obstruction then there has to be impeachment. Again, He (Putin) was too cocky because he has top White House administration officials in his pockets, he went too far doing things with a man that can't keep his mouth shut if his Presidency depended on it, to the point I know about it and (so has the American electorate).   His man Trump is dying to let him off the hook with the sanctions and make him a man again having no bad days again but every days it becomes less and less possible for Trump to do it. I am sure we will find out the reasons why Trump has tried to do this as soon as he came to the White House. This is a gift to the enemy that if it was a General of the US doing it, it would be treason.

Russian President Vladimir Putin is always at his best, he tells director Oliver Stone in a new documentary called "The Putin Interviews" that will air on Showtime June 12-15. The politician attributes his stamina and stability in part to the fact that he's a man.
As Bloomberg reports, "'I am not a woman, so I don't have bad days,' he tells Stone while giving a tour of the Kremlin's gilded throne room. 'I am not trying to insult anyone. That's just the nature of things. There are certain natural cycles.'"
Later in the interview for the documentary, which Bloomberg describes as friendly bordering on fawning, Putin reminds Stone that he is a "Judo master" in peak physical shape.

Elsewhere, Putin is shown indulging his now-familiar passion for playing ice hockey, and flexing his muscles on an exercise machine. He told Stone that he lifts weights and then swims every day. Putin's also seen feeding carrots to a thoroughbred horse named after Dutch theoretical physicist Johannes Diderik van der Waals at his residence.

This kind of swagger is not unusual for the 64-year-old, who appears to enjoy being photographed shirtless in the outdoors as well as while holding firearms and playing sports, and who recently bragged that Russia's prostitutes are "undoubtedly the best in the world."

Alexei Druzhinin | Reuters
Vladimir Putin swims in a lake in southern Siberia's Tuva region August 3, 2009.
America's president has professed admiration for the virility of Russia's: Donald Trump has called Putin "very smart" and said that, unlike former President Barack Obama, "he's a leader." During the 2016 campaign, he criticized Democratic candidate Hillary Clinton for her "stamina" and accused her of being "low energy."
Secretary of State Rex Tillerson said on Tuesday that he is acting on Trump's instructions "to rebuild relations with Moscow," despite the ongoing investigations into the White House's relationship with the Kremlin and its efforts to affect the outcome of the election.
Sexism in Russia remains a persistent problem, according to Russia Beyond the Headlines, and "discrimination against women is commonplace." Columnist and chief editor of the online poster site Ezhikezhik.ru Svetlana Feoktistova tells that site, "Men allow themselves to use insulting expressions, engage in sexual harassment, and make dirty jokes, thinking that it is normal and that if a woman is offended, she lacks a sense of humor.
"There is a male primacy in work issues."

Over 5Million Reads Adam Gonzalez at June 07, 2017 No comments: Links to this post