Tough Talking Secretary Pompeo Looking for Answers? With a Smile and a Grin!

Secretary of State Mike Pompeo has cast himself as a tough, straight-talking former Army tank commander with the moral clarity necessary to confront the world’s bad guys. But on his quick trip to Saudi Arabia, where he sat smiling with royal leaders suspected of involvement in the disappearance of a dissident Saudi journalist, he hardly seemed the image of moral clarity or toughness.
As he was leaving Riyadh, the Saudi capital, on Wednesday, Mr. Pompeo was asked if Saudi officials had told him whether the Washington Post columnist Jamal Khashoggi was alive or dead.
“I don’t want to talk about any of the facts,” Mr. Pompeo said dismissively. “They didn’t want to either.”
That set off an immediate maelstrom of criticism against the Trump administration’s chief diplomat.
“The pictures of Pompeo grinning, smiling and laughing with the crown prince — as if a journalist wasn’t just murdered — are remarkable,” Shadi Hamid, a scholar of Middle East policy at the Brookings Institution, wrote on Twitter.
“Not only is it bad policy; it’s downright embarrassing,” Mr. Hamid said. “It makes Pompeo look like an unserious pushover. It’s really indefensible on any grounds.”
A former American ambassador to the United Nations added to the criticism.
“The fact that Saudis ‘didn’t want to’ talk about the facts is to be expected,” said Samantha Power, who served in the Obama administration. “The fact that the representative of the United States didn’t want to talk about the facts is a travesty.”
Hours later, on his way back to the United States, Mr. Pompeo addressed the criticism that he had failed to hold the Saudis to account. He said he wanted “to give them the space to complete their investigations of this incident.”
“It’s reasonable to give them a handful of days more to complete it so they get it right, so that it’s thorough and complete,” Mr. Pompeo said after a brief stop in Turkey, where Mr. Khashoggi entered the Saudi Consulate in Istanbul on Oct. 2 and had not been seen since.
“That’s what they’ve indicated they need,” Mr. Pompeo said, “and then we’ll get to see it. We’ll evaluate this on a factual, straight-up basis.”
He said the relationship between the United States and Saudi Arabia was important for strategic and financial reasons.
“I do think it’s important that everyone keep in their mind that we have lots of important relationships — financial relationships between U.S. and Saudi companies, governmental relationships, things we work on together all across the world,” Mr. Pompeo said.
Mr. Pompeo spent just over a day in Riyadh, where news video footage showed him nodding and smiling as Crown Prince Mohammed bin Salman spoke. It was a very different image than the cut-to-the-chase congressman who had blisteringly questioned Hillary Clinton about the 2012 attack on a diplomatic compound in Benghazi, Libya, becoming a conservatives’ hero.
“His instructions are clearly to preserve the U.S.-Saudi relationship at all costs,” said Wendy Sherman, a former top State Department official. “So his nonverbal cues and his remarks are intended to do that.” 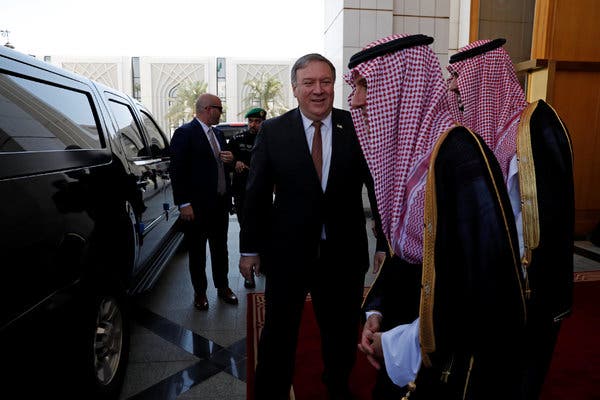 But, she said, “he could have taken off the grin, dispensed with small talk, said facts were important and the U.S. was committed to get them and ended in a better place.”
After Riyadh, Mr. Pompeo flew to Ankara for meetings with Turkey’s president and foreign minister, whose government leaked a gruesome audio recording, purportedly of Mr. Khashoggi’s killing and dismemberment by Saudi agents.
A State Department spokeswoman said on Wednesday that Mr. Pompeo had not heard the tape. Top Saudi officials, including Prince Mohammed and King Salman, have repeatedly denied any role in Mr. Khashoggi’s disappearance.
At the White House, President Trump said he would “have a long talk” with Mr. Pompeo about what he learned in Saudi Arabia and Turkey.
“He spent a lot of time with the crown prince, and he’s going to have a full report,” Mr. Trump said.
He also offered that “Saudi Arabia has been a very important ally of ours in the Middle East. We are stopping Iran.”
But the mounting evidence of Saudi perfidy has confronted the Trump administration with a grave foreign policy crisis. Saudi Arabia is a crucial partner in the administration’s efforts to isolate Iran and maintain security for Israel — all while keeping gas prices low.
It has also damaged the delicate balancing act Mr. Pompeo had sought to strike as a straight-talking top diplomat in an administration infamous for its alternative facts. And it comes just as Mr. Pompeo seemed to be hitting his stride.
R. Nicholas Burns, the third-ranking official at the State Department in the George W. Bush administration, described Mr. Pompeo as “a serious and tough-minded person,” who was right to travel to Saudi Arabia, given the crisis.
“But we have more important interests at stake,” Mr. Burns said. “We can’t afford to have a business-as-usual attitude. This is a time to be stern with M.B.S., to disavow his government’s crime and to sanction Saudi Arabia. Our credibility as a democracy is at stake,” he added, using an acronym for the prince.
Mr. Burns said the United States was obviously trying to retain influence with Riyadh given the range of shared issues — Iran, Israel and energy among them.
The case of Mr. Khashoggi complicates all of that since Riyadh — a crucial partner in the effort to confront Iran — now no longer appears to offer a positive contrast with Tehran. Saudi Arabia also has overseen a war in Yemen that has become the world’s worst humanitarian crisis, imprisoned activists and led a blockade against Qatar.
Other analysts noted the bind in which Mr. Trump had put Mr. Pompeo when the president ordered his top diplomat to go to Saudi Arabia.
“Secretary Pompeo was put in an almost impossible situation from the outset: traveling to meet with people suspected of having ordered a political assassination at the request of a president determined to sweep the affair under the rug,” said Rob Malley, president of the International Crisis Group and a senior National Security Council adviser on Middle East issues during the Obama administration.
But, Mr. Malley said, Mr. Pompeo “made the situation even worse by taking on the task with apparent bonhomie and good humor, which hardly seems the optimal way to convey seriousness or demand genuine accountability.”
Over 5.6 Million Reads Adam Gonzalez at October 18, 2018 No comments: Links to this post

Email ThisBlogThis!Share to TwitterShare to FacebookShare to Pinterest
Labels: Saudis and Terror, Secretary of State

Mike Pompeo Just Can’t Say if He thinks Gays Are a Perversion or Not (What Did Hillary Say?) 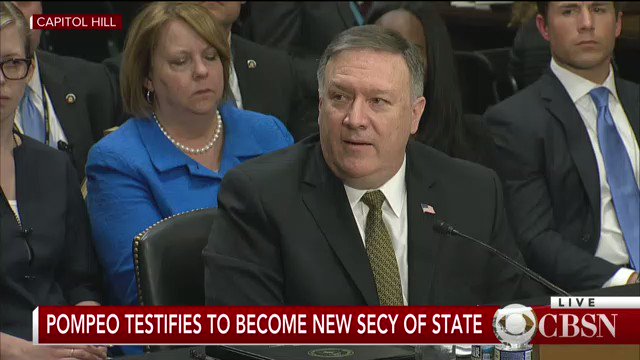 Trump’s pick for a new secretary of state, CIA director Mike Pompeo, struggled under a string of questions on minority rights in his confirmation hearing today. The exchange culminated with Pompeo refusing to say whether he still stood behind his own past implicationthat homosexuality is a “perversion.”

In response to Democratic senator Cory Booker, Pompeo said he didn’t support gay marriage but that he treated married gay people at the CIA in “the exact same way as everyone else.” Asked repeatedly if he believed that “gay sex is a perversion,” Pompeo refused to answer the question, saying, his “respect for every individual, regardless of their sexual orientation, is the same.”

Booker was referring to a 2015 rally in Georgia where Pompeo quoted a Christian religious leader who decried Americans as having “worshipped other gods and called it multiculturalism and…endorsed perversion and called it an ‘alternative lifestyle'” (at 4:20).

As secretary of state, Pompeo would represent the United States and its interests abroad, and the state department is responsible for the protection of US citizens around the world. Protection of gay rights, and assistance to refugees from countries where homosexuality is a criminalized, has been part of the agency’s work in recent years. In his hearing, Pompeo later said, “I deeply believe that LGBTQ persons have every right that every other person in the world would have.”

Further questioned about a previous assertion (paywall) that “silence” has made “Islamic leaders across America potentially complicit” in acts of terrorism, Pompeo clarified that he saw speaking out as an “opportunity” not an “obligation.”

Booker followed up by asking if Pompeo had taken such an opportunity to condemn conspiracist Frank Gaffney’s anti-Muslim rhetoric. Pompeoappeared more than 20 times on his show between 2013 and 2016. Pompeo didn’t answer the question, only saying that his record was “unambiguous” on the matter. His response was similar when asked if he had condemned other anti-Muslim groups with which Pompeo has been associated.

Hillary; When Hillary Clinton went through her confirmation hearings she said she wanted to bring Gays towards the forefront and she did; Even within the constraints of the law back then.
It is adamfoxie's 10th🦊Anniversay. 10 years witnessing the world and bringing you a pieace whcih is ussually not getting its due coverage. 4.9 Million Reads