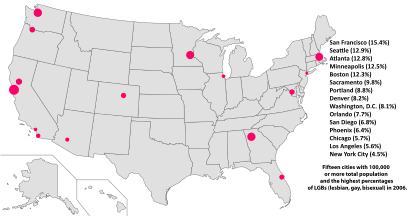 Cities with the highest percentage of LGBT people in 2018.

The amazing parts about these surveys are that most of them are wrong because so many people are in the closet or don't even identify as gay even though they never have seen or had any particular desire to see a vagina. But to be fair this is an interesting time to pay attention to the surveys because so many people are out to compare to a decade or more ago. I hope the practice of coming out continues because that is the main well of power to at least not lose what we have accomplished. Even with Trump and the Evangelical right trying to take us back to the past, the LGBT train has never stopped because of the decency of straights in which even if religious they know discrimination is anti-god, anti-decency, anti-commerce, anti-common sense. Adam

An estimated 4.5% of adults in the United States, approximately 11.3 million people, identify as LGBT, according to a new analysis by the Williams Institute at UCLA School of Law. The majority of LGBT people ( 58% ) are female and 29% of LGBT people over the age of 25 are raising children.

Researchers analyzed data from the Gallup Daily Tracking Survey to create a comprehensive look at the demographics and socioeconomic status of LGBT adults nationwide and by state. Results are presented in the LGBT Data & Demographicsinteractive on the Williams Institute website and can be filtered by gender and race.

Population estimates by the state can be found in the companion report, "Adult LGBT Population in the United States."

"These findings remind us that LGBT people are young and old, people of color and white, they are parents, and they live in every state of the union," said Kerith Conron, Blachford-Cooper Distinguished Scholar and Research Director at the Williams Institute. "Most LGBT people are not wealthy, and in fact, many LGBT people are low-income and are experiencing food insecurity. At a minimum, policy-makers and service providers should work to ensure access to safety net program and services for LGBT people."
Access the full LGBT Data & Demographics interactive: WILLIAMSINSTITUTE.LAW.UCLA.EDU/VISUALIZATION/LGBT-STATS/ .

The Williams Institute at UCLA School of Law, a think tank on sexual orientation and gender identity law and public policy, is dedicated to conducting rigorous, independent research with real-world relevance. WILLIAMSINSTITUTE.LAW.UCLA.EDU/
Over 5Million Reads Adam Gonzalez at March 06, 2019 No comments: Links to this post