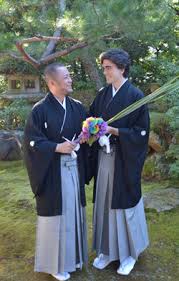 A conservative ally of Prime Minister Shinzo Abe has called for discussion on revising Japan's constitution to allow same-sex marriage, annoying colleagues in the ruling party who are against it and also opposition parliamentarians who say enacting a simple law would clear the way.
Japan's laws on LGBTQ rights are relatively liberal compared with those in many Asian countries, although many LGBTQ people still conceal their sexuality.
But couples seeking to register same-sex marriages have been rejected by local authorities because there is no law specifically recognizing it.
The constitution, never amended since it was adopted after Japan's defeat in World War II, says: "Marriage shall be based only on the mutual consent of both sexes and it shall be maintained through mutual cooperation with the equal rights of husband and wife as a basis".
Amending the constitution's pacifist Article 9 to clarify the status of Japan's military is a long-held goal of Abe and his ruling Liberal Democratic Party. Revising the article is highly controversial, although it has already been stretched to allow armed forces for self-defense.
Former Education Minister Hakubun Shimomura last month floated the idea of adding same-sex marriage to a list of other potential constitutional changes.
"It is important to proceed with debate without any taboo, including of the idea that a man can marry a man and a woman can marry a woman," NHK public TV quoted him as saying at a meeting of local LDP members last month.
The LDP has said same-sex marriage was "incompatible" with the constitution and Shimomura's remark caused concern at a meeting of the party's general affairs committee this week, media reported.
"One should not lightly make comments such as revising the constitution to recognize same-sex marriage," the Asahi newspaper quoted former cabinet minister Keiji Furuya as saying. LGBTQ activists including Kanako Otsuji of the Constitutional Democratic Party of Japan (CDPJ) - the country's first openly LGBTQ lawmaker - say no amendment is needed to allow same-sex marriage because the constitution does not explicitly ban it.
They have submitted a marriage equality bill to parliament in June, but the ruling coalition has declined to debate it.
"I think the goal is to shake up the opposition," Otsuji told Reuters, referring to Shimomura's suggestion. "If they agree with same-sex marriage, they should agree with our bill."
Shimomura's office declined a request for an interview due to his tight schedule.
A survey last year showed nearly 80 percent of Japanese in their 20s to 50s favored legalizing same-sex marriage.
"The constitution did not envision same-sex marriage when it was written...but it was not prohibited," said Gon Matsunaka, head of Pride House Consortium, which promotes LGBTQ awareness.
"Society and the world have changed and it is the responsibility of the legislature to pass a law in line with that."
Constitutional amendments must be approved by two-thirds of the members of both houses of parliament and a majority in a public referendum. The ruling bloc has a two-thirds majority in the lower house but lacks one in the upper chamber.
(Reuters)

Over 5Million Reads Adam Gonzalez at October 05, 2019 No comments: Links to this post