Thanks to a swift response by the Mexican government, a potentially dangerous confrontation by hostile fisherman towards Sea Shepherd was averted on Thursday March 30.
A temporary restraining order issued against the fisherman on March 28 by the Attorney General’s office was ratified by a judge on April 5th.
Protesting fishermen, led by one of San Felipe’s fishing cooperative leaders, held a demonstration on March 26thwhere they threatened to burn Sea Shepherd ships if they were still in the Gulf by Thursday, March 30th at 14:00 hours.
Sea Shepherd is currently in the Gulf, also known as the Sea of Cortez, for Operation Milagro III to protect the near extinct vaquita porpoise and the endangered totoaba bass. The campaign is in partnership with the government of Mexico.
At the demonstration, the fisherman and their leader took a small local fishing boat, known as a ‘panga,’ painted Sea Shepherd’s name on it, and burned it in the streets of San Felipe. The act served as a warning that they would do the same with the anti-poaching organization’s ships, the M/Y Sam Simon and M/V Farley Mowat, if they did not exit Mexican waters. The demonstration ended with the leader promising to attack the Sea Shepherd crew with 200 pangas on March 30th.
When that date arrived, Mexican Navy vessels acted as escorts for the Sam Simon and the Farley Mowat in case a clash occurred. Meanwhile, on shore police screened fishing boats before allowing them to launch in to the sea.
However, no more than 60 pangas managed to assemble in the harbor, and none set sail towards Sea Shepherd.  No one was hurt on either side and no property damage occurred.

On April 5th,  a Mexican judge ratified a restraining order to the fisherman and their group leader, forbidding them to speak, threaten and harass campaign leader and Sam Simon Captain Oona Layolle and the Sea Shepherd crew aboard the Sam Simon and the Farley Mowat. The fisherman have been ordered not come near the ships and land base.
“Sea Shepherd very much appreciated the effective measures taken by the Mexican government to quell what was potentially a very explosive and violent situation,” said Captain Paul Watson.
Illegal poachers who set the banned gillnets that trap the vaquita, totoaba and other marine animals - are angry that Sea Shepherd is working with their government to remove these nets, and remove the animals caught in them, be they dead or alive.  The totoaba bladders fetch $20,000 a kilo in China, a price that has attracted individuals tied to organized crime and drug smuggling to the trade.
This illegal fishing has caused the vaquita numbers to dwindle down to less than 30, leaving the world’s tiniest porpoise on the brink of extinction. In March, Sea Shepherd found several dead vaquita floating in the Gulf.
The poachers’ animosity toward Sea Shepherd is further intensified because the conservation society uses drones to locate the illegal fisherman and the promptly notifies the Mexican authorities of their coordinates, which has led to arrests.
“Sea Shepherd is not in the area to oppose legal fishing activities,” said Captain Layolle. “Sea Shepherd’s actions are focused on illegal fishing and the only fishermen who have any reason to be angry with the Sea Shepherd ships are those whose illegal activities are being disrupted and shut down by Sea Shepherd crews.

Operation Milagro IIIsite for more information.
Over 5Million Reads Adam Gonzalez at April 13, 2017 No comments: Links to this post 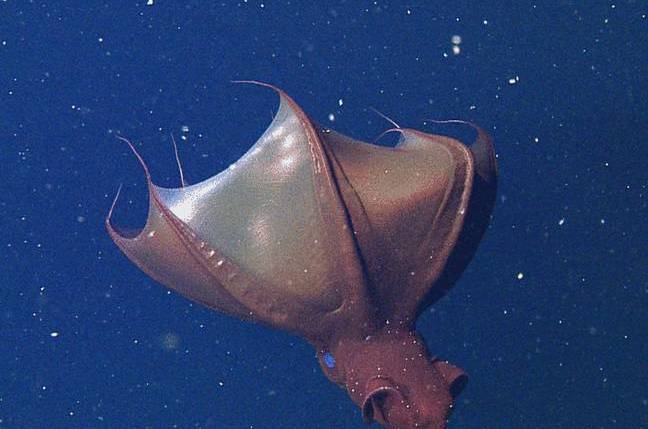 Pic Scientists studying vampire squid have discovered the weird creatures of the vasty deep are unique among their class in the way they reproduces.
Cephalopods, which include squid and octopuses, breed at the very end of their life cycles, funneling all their energy into creating eggs that are released shortly before the parent dies.
But vampire squid – found in oxygen-poor environments 600 to 900 metres (2,000 to 3,000 ft) below the sea surface – manage to get frisky with their partners many, many times throughout their lives.
"Their slow mode of life seems insufficient to support one big reproductive event, unlike other coleoid cephalopods," said Henk-Jan Hoving of the GEOMAR Helmholtz Centre for Ocean Research Kiel in Germany, who published the findings in the journal Current Biology.
"Perhaps it is therefore that vampire squid return to a gonadal resting phase after spawning, and presumably start accumulating energy for a new reproductive cycle." 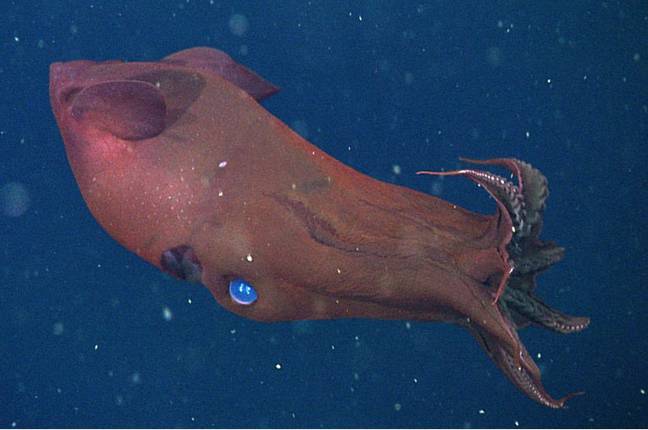 "Is that an egg sac in your tentacles or are you just pleased to see me?"
The team examined the corpses of 43 female vampire squid, and found that some not only had eggs ready to go, but had already spawned multiple times. One female, assuming an average batch of 100 eggs per session, had spawned 38 times, and had eggs in reserve for at least 60 more spawning episodes.
Vampire squid are certainly odd beasts. Unique among cephalopods, they don't hunt for live prey, but feed on nutrients and food scraps as they pulse through the water. Its eight legs are linked by skin membranes, giving it the cloaked appearance that gives the creature its name.
The scientists speculate that the low levels of food and oxygen in very deep seas have forced vampire squid into a more slow and sustainable lifestyle, and that is reflected in its sex life.
"We know very little about deep-sea organisms and their life-cycle patterns, in particular in the water column of the deep sea. The patterns we know from coastal and shallow-water organisms may not apply to deep-sea species," Hoving said.
"We need to enhance our knowledge of deep-sea pelagic organisms and the system they are part [of], since the pelagic deep sea is the largest living space on the planet. A better understanding of this unique marine ecosystem will eventually allow for better development of management and conservation strategies.” ®

theregister.co.uk
Over 5Million Reads Adam Gonzalez at April 22, 2015 No comments: Links to this post