"For Trump Voters" and Reminder to Others 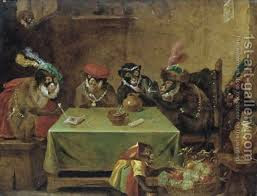 So after six months, has he delivered what he promised you?

1. He told you he’d repeal Obamacare and replace it with something “beautiful.” You bought it. But he didn’t repeal and he didn’t replace. (Just as well: His plan would have knocked at least 22 million off health insurance, including many of you.)

2. He told you he’d cut your taxes. You bought it. But tax “reform” is stalled. And if it ever moves, the only ones whose taxes will be cut are the wealthy.

3. He told you he’d invest $1 billion in our nation’s crumbling infrastructure. You bought it. But his infrastructure plan, which was really a giveaway to rich investors, is also stalled.

So after six months, has he delivered what he promised you?

4. He said he’d clean the Washington swamp. You bought it. But he’s brought into his administration more billionaires, CEOs and Wall Street moguls than in any administration in history, to make laws that will enrich their businesses, along with former lobbyists, lawyers and consultants who are crafting new policies for the same industries they recently worked for.

5. He said he’d use his business experience to whip the White House into shape. You bought it. But he created the most chaotic, dysfunctional, back-stabbing White House in modern history, in which no one is in charge.

6. He said he’d close “special-interest loopholes that have been so good for Wall Street investors but unfair to American workers.“ You bought it. But he picked a Wall Street financier Stephen Schwarzman to run his strategic and policy forum, who compares closing those loopholes to Hitler’s invasion of Poland.

7. He told you he’d “bring down drug prices” by making deals with drug companies. You bought it. But now the White House says that promise is “inoperative.”

9. He said he wouldn’t bomb Syria. You bought it. But then he bombed Syria.

10. He called Barack Obama “the vacationer-in-chief” and accused him of playing more rounds of golf than Tiger Woods. He promised to never be the kind of president who took cushy vacations on the taxpayer’s dime, not when there was so much important work to be done. You bought it. But in his first six months he has spent more taxpayer money on vacations than Obama did in the first three years of his presidency. Not to mention all the money taxpayers are spending protecting his family, including his two sons who travel all over the world on Trump business.

11. He said he’d force companies to keep jobs in America. You believed him. But despite their promises, Carrier, Ford, GM and the rest are shipping jobs to Mexico and China.

Over 5Million Reads Adam Gonzalez at July 28, 2017 No comments: Links to this post

Trump Draining the Swamp with the Swamp People ???????

Donald Trump on Friday announced Vice President-elect Mike Pence would take over transition planning from Chris Christie, a move that sources say reflect a diminished role for the New Jersey governor.
Sources tell NBC News that the controversy surrounding two former Christie aides being convicted in the closure of George Washington Bridge lanes was an issue, but more significant was Christie's failure to vocally defend Trump at key moments throughout the campaign.
Pence, meanwhile, increasingly earned Trump's trust and respect by becoming one of his more vocal defenders on the campaign trail.
Christie will remain a vice-chair, along with a number of other key campaign advisers, including former House Speaker Newt Gingrich, Gen. Mike Flynn and former New York City mayor Rudy Giuliani, among others.
"The mission of our team will be clear: put together the most highly qualified group of successful leaders who will be able to implement our change agenda in Washington," Trump said in a statement.
Pence, as well as Trump's son-in-law Jared Kushner and campaign chief Steve Bannon will be leading the charge to whittle down names for cabinet positions. The transition executive committee will include three of his children, Donald Trump Jr., Eric Trump and Ivanka Trump.
But despite Donald Trump's campaign pledge to "drain the swamp" in Washington and his outsider campaign, many of the prospects are clear Washington insiders.
Sources tell NBC News that Texas Rep. Mike McCaul, chairman of the House Homeland Security Committee, is being considered for Secretary of Homeland Security; former Michigan Rep. Mike Rogers, a past chairman of the House Intelligence Committee, is on the list for Director of the CIA; while Texas Rep. Jeb Hensarling, chairman of the Financial Services Committee, is in the mix for Treasury Secretary.


Hensarling weighed in on the chatter with a statement saying "serving in [Trump's] Cabinet is not something I've indicated an interest in and it's not something I am pursuing" — but notably he didn't rule it out.
"It's nice to be mentioned, and I certainly want to help our new president make America stronger and more prosperous, but serving in his Cabinet is not something I've indicated an interest in and it's not something I am pursuing," he said. "I've got enough on my plate working for the great people of Texas, serving as chairman of the Financial Services Committee."
In Capitol Hill Meetings, Donald Trump Reveals His Top Priorities
Meanwhile, key campaign operatives were keeping their options open. Trump Campaign Manager Kellyanne Conway, considered a possible pick for chief of staff or a senior adviser in the Trump White House, left the door open to both.
"Those decisions have not been made. We¹re just really trying to help with the transition and also just really digest the incredible victory that we had, but I'll be talking to Mr. Trump directly about that soon," she told NBC News Thursday night, when asked about the chatter.
New Jersey Gov. Chris Christie, meanwhile, said as much with his silence. He was replaced to lead the campaign transition team by Pence after Trump and his running mate bonded, campaign sources said.
The sources added that Trump was unhappy with Christie's failure to stand by him vocally during rockier moments of his campaign.
Asked on NBC's TODAY Show about whether he'd be interested in being Trump's chief of staff, Christie paused for a long beat before host Matt Lauer asked about his interest in the Attorney General position. Christie replied, "You don't think I'm really going to answer [those questions]?"
With Christie a vice-chair on the transition team, he will be getting help from Ben Carson, Newt Gingrich, Rudy Giuliani. retired Lt. Gen. Mike Flynn and Alabama Sen. Jeff Sessions.
Rounding out the executive team will be Congressman Lou Barletta, Congresswoman Marsha Blackburn, Florida Attorney General Pam Bondi, Congressman Chris Collins, Congressman Tom Marino, American businessman Anthony Scaramucci and others.
But even without all names settled, the Trump campaign has asked for two dozen people to be vetted for security clearances to access classified information — and a few key members of Trump's team have already received them.
Trump National Security Team Includes Surprising Names
Rogers, Christie, Gingrich and Giuliani — the latter two both Trump campaign advisers being considered for Secretary of State — have all been given clearances.
Meetings in Trump Tower to plot out further details of the president-elect's cabinet continued apace even as Trump himself flew to Washington for meetings with President Obama and Republican leadership on Capitol Hill. Campaign staffers, all the way down to advance staff, were asked Thursday to submit their top three administration job picks to the transition staff, and some came through Trump's campaign headquarters to discuss their options with the team personally.
While many cabinet prospects have declined to comment on the speculation, others have been vocal about their interest.
Giuliani told the New York Times Wednesday he wasn't "interested" in returning to government, but the next day touted his experience when asked on CNN whether he was interested in serving as Attorney General.
"I certainly have the energy. There's probably nobody that knows the Justice Department better than me," he said.
Ben Carson said on Fox Business on Thursday, when asked on Fox Business about serving as head of Health and Human Services, "these are all things that are under discussion."
And while his polarizing campaign had many longtime White House advisers and aides swearing off of service in a Trump White House, Trump's win seems to have changed some minds — even turning former enemies into friends.  Texas Sen. Ted Cruz, whose primary fight with Trump turned nasty in its final weeks as the candidates traded personal attacks, told reporters Wednesday he spoke with both Trump and Vice President-elect Mike Pence and "I offered them my full and unequivocal support."
But it's not clear that all those considered would want the job.
One of the more unexpected names to come up Thursday was JP Morgan CEO Jamie Dimon. Dimon's chief of staff confirmed to NBC News that, though Trump has had no formal conversation with him, some of Trump's senior advisers have told Dimon he would make an "excellent" Treasury Secretary.
But Dimon is a Democrat who publicly supported President Obama and last month seemed to express support for Hillary Clinton as well — or at least an expectation she would win the election — when he said at a JPMorgan conference that “I hope the next president, she reaches across the aisle.”

KATY TUR
nbcnews.com
Over 5Million Reads Adam Gonzalez at November 12, 2016 No comments: Links to this post