No More White Rhinos in Sudan}}}} The Last One Just Died 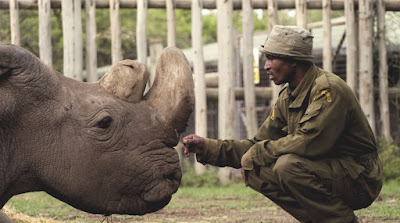 It is with great sadness that Ol Pejeta Conservancy and the Dvůr Králové Zoo announce that Sudan, the world’s last male northern white rhino, age 45, died at Ol Pejeta Conservancy in Kenya on March 19th, 2018 (yesterday). #SudanForever #TheLoneBachelorGone #Only2Left
The world's last surviving male northern white rhino has died after months of poor health, his carers say.
Sudan, who was 45, lived at the Ol Pejeta Conservancy in Kenya. He was put to sleep on Monday after age-related complications worsened significantly.
His death leaves only two females - his daughter and granddaughter - of the subspecies alive in the world.
Hope for preserving the northern white rhino now lies in developing in vitro fertilization (IVF) techniques.
"His death is a cruel symbol of human disregard for nature and it saddened everyone who knew him," said Jan Stejskal, an official at Dvur Kralove Zoo in the Czech Republic, where Sudan had lived until 2009.
"But we should not give up," he added in quotes carried by AFP news agency.
"We must take advantage of the unique situation in which cellular technologies are utilised for conservation of critically endangered species. It may sound unbelievable, but thanks to the newly developed techniques even Sudan could still have an offspring."  Why is this kind of rhino so rare?
Rhinoceroses - of which there are five species - are the second-largest land mammal after elephants. The white rhinoceros consists of two sub-species: the southern white rhino and the much rarer and critically endangered northern white rhino.
Sudan, who was the equivalent of 90 in human years, was the last surviving male of the rarer variety after the natural death of a second male in late 2014.
The subspecies' population in Uganda, Central African Republic, Sudan and Chad was largely wiped out during the poaching crisis of the 1970s and 1980s. Poaching was fuelled by demand for rhino horn for use in traditional Chinese medicine, and for dagger handles in Yemen.
BBC

It is adamfoxie's 10th🦊Anniversay. 10 years witnessing the world and bringing you a pieace whcih is ussually not getting its due coverage.
Over 5Million Reads Adam Gonzalez at March 21, 2018 No comments: Links to this post 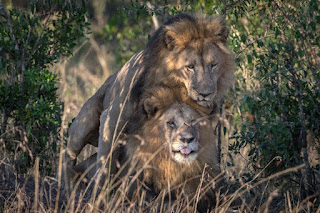 A wildlife photographer's candid shot of two male lions in what appears to be an amorous embrace at a reserve in Kenya has the African nation's moral authorities concerned about possible demonic possession, or humans "behaving badly" and setting the wrong example for the animal kingdom.

"Demons also inhabit animals," Ezekiel Mutua, the chief executive of the Kenya Film Classification Board, told Nairobi News in an interview posted online last week.
The recent photos, taken in a Kenyan wildlife area, do show a rare sight: a male lion mounting another male lion in what resembles a sexual act, but experts say may have been a way of showing dominance.
The spectacle of two wild male lions in such intimacy was also observed in Botswana last year and has sometimes been interpreted as homosexual behavior, though lion experts say it is a relatively uncommon form of bonding or social interaction.
Paul Goldstein, the photographer who captured the images in Kenya's Maasai Mara reserve in August, said many other species are known to engage in such behavior and that, for example, he had seen giraffes doing it.
"It was just a dramatic thing to see," Goldstein said of the male lions. He was astonished by Mutua's remarks, declaring it "not normal" and attributing the behavior to demonic possession, or copying what he clearly believes is amoral human behavior.
"These animals need counselling, because probably they have been influenced by gays who have gone to the national parks and behaved badly," said Mutua. "I don't know, they must have copied it somewhere or it is demonic. Because these animals do not watch movies."
"The demonic spirits inflicting in humans seems to have now caught up with the animals," the film classification board director said. "That is why I will say isolate the crazy gay animals." Wild male lions have only mounted each other for a day or two in past cases that were observed, and the activity happens "during periods of social stress or a realignment of their dominance relationship," said Craig Packer, director of a lion research center at the University of Minnesota.
"There have been several observations of male lions mounting each other without intromission, and the males subsequently resumed their normal patterns of mating with receptive females," Packer wrote in an email to The Associated Press.
"Male lions form stable coalitions and they are very affectionate with each other, but this affection is expressed by rubbing their heads together, licking each other's faces and flopping on top of each other," he wrote.
Another lion expert said cases of male lions mounting each other are "typically infrequent" and that he interprets it as a form of social bonding.
"Male lions have to commit to supporting each other when a territory is challenged, so maybe at times of territory take-over males are stressed and more likely to" engage in such an act, said Paul Funston, senior director of lion and cheetah programs at the Panthera conservation group.
In a blog post last year, Funston noted that a photographer documented similar behavior by two male lions that had traveled from Namibia to Botswana, and he described it as "remarkable but not unheard of behavior that was misunderstood by many."
Ian Michler, maker of a documentary film called "Blood Lions," said lions "have been known to 'mate' as a way of showing dominance of other males" in a group, particularly a new one.
While the lions photographed in Kenya and Botswana were confirmed to be male, Michler also remarked that some female lions with high testosterone levels grow manes, often don't produce offspring and might be mistaken for males.
CBS Interactive  The Associated Press contributed to this report.
Over 5Million Reads Adam Gonzalez at November 10, 2017 No comments: Links to this post

Crippling,Historic, Devastating Blizzard are the Adjectives being used for the Snow Outside

In case the electric fails adamfoxie.com  will continue to give updates like we have done for you in years past. We will transmit until the batteries give up. This bring memories of sitting in a dark room typing updates to post on Facebook. This was before Google+ * and I will only do if it’s really necessary. I hope not, will rather watch movie.

Ready for a snow day, anyone? A major blizzard is converging on New England and may dump as much as a foot or more of snow on major cities like New York City and Boston.
According to the Weather Channel, blizzard watches are in effect from southern New England to New York City with a lesser storm warning issued as far west as metro Philadelphia. The snowfall will peak late Monday night and is expected to reach a foot or more in New York City, with six inches expected in Philadelphia and up to two staggering feet in southern and eastern New England "including Boston, Providence, Rhode Island and Portland, Maine." Boston may see even more.

The Weather Channel is dubbing the storm "potentially historic," and it looks like this time they're not exaggerating. Washington Post weather expert Wes Junker reports that the storm could have "potentially crippling impacts" on some coastal areas.

"This storm could produce a stripe of heavy to possibly crippling snow and strong winds, which would lead to blizzard conditions," Junker reported. "Where the low tracks off the coast, and how quickly it develops, will determine who in in the northeast might be impacted the worst. All the model solutions on Saturday morning would crush the Northeast somewhere between N.J. and New England. It’s too early to say exactly who would garner the most snow."


Depending on which forecast model is used, Washington Post's Angela Fritz adds that the worst could hit a range from Boston to northern New Jersey or even miss much of the East Coast entirely, making it a "bust for most of the Northeast."

European model forecast (left) vs. NAM forecast (right). Image from weatherbell.com via Washington Post
Here's exactly when the snowfall is projected to hit, via Accuweather:

Snowfall on Saturday afternoon has already left five inches of snow on the ground in New York City, with New Jersey and northern New York reporting up to nine inches of accumulation in some areas.

The worst is projected for Monday night through Tuesday morning, with winds reaching up to 35 mph throughout New York, Long Island and New England — so maybe put a pin in those travel plans until meteorologists give the all-clear.
Tom McKay J
mic.com
Over 5Million Reads Adam Gonzalez at January 27, 2015 No comments: Links to this post

Sea Wold Are Drugging their Orcas

You know those rumblings about Prozac in our drinking water? That might not be too far off for the animals at SeaWorld.
BuzzFeed got its sticky mitts on an affidavit that reveals SeaWorld is giving its orcas benzos to make them chill out and stop attacking each other. It’s basically an attempt to use orca Xanax to numb the animals’ aggression and general pissed-off-ness at being snatched from the ocean, plopped into captivity, and forced to perform.
Writes BuzzFeed’s Justin Carissimo:

Trainers give their orcas, also known as killer whales, the psychoactive drug benzodiazepine, according to the sworn affidavit filed in the Ontario Superior Court of Justice … The orcas’ mental health issues, SeaWorld’s critics say, are a direct result of their keeping the mammals in captivity.

Ingrid Visser of the Orca Research Trust gave the site a few heart-ripping examples of the stressed-out orca behavior SeaWorld is trying to medicate:

They do not cope with being kept in these tanks … They show stereotypical behaviors that are abnormal … like head bobbing, chewing on concrete, and self mutilation by banging the side of their heads on the side of the tank, and there isn’t a single orca living in captivity where you cannot see one of these behaviors, and in many of them you see multiple examples of these behaviors.

Some sedation before surgery and the like is normal, and of course SeaWorld says its use of benzodiazepine is “limited and infrequent.” Honk if you believe THAT.

Holly Richmond (hollyrichmond.com) writes and edits things for fun and money. She worked for Grist in the 1890s. Please follow her on Twitter because that is the entire basis of her self-esteem.
link.grist.org
Over 5Million Reads Adam Gonzalez at April 04, 2014 No comments: Links to this post