The media Saved! The Hated Ginger-Man and Woman 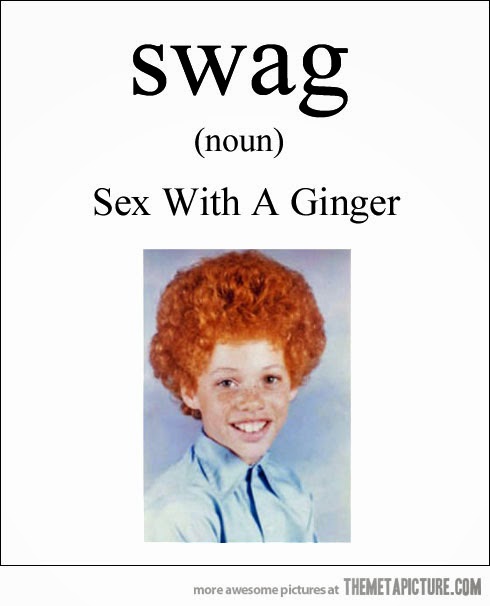 "How many Instagram followers do One Direction have, 7 million? I'm way off that, I've only got 26,000." Ken Bek is sitting in a Soho coffee shop scrolling through his phone, oblivious to the waitress hovering hopefully nearby. In fact, most of the women (and men) are staring at the 21 year-old Dane and his bearded companion. But more of which later.
In the past year, you may have noticed a shift in the way we discuss gingers. Once the subject of playground taunts, sporting a head of red hair is now positively en vogue - thanks to the efforts of one man.
Inspired by the renaissance of interest in ginger men spearheaded by Damian Lewis and Prince Harry and a yearning to make ginger men desired, photographer Thomas Knights sought out the hottest ginger men to be part of a topless male exhibition celebrating red hair. The first Red Hot exhibition opened in London last December, spawning calendars, a range of t-shirts and a glossy coffee table book and raising thousands of pounds for anti-bullying charities. Following its rapturous reception, the project has travelled across the globe to Amsterdam and America, thanks mainly to a fanatical online following. And for the first time, women are getting in on the act.
I first met Knights in his north London studio in late October, shortly after his return from New York as he prepared to take the exhibition to Australia. Affable and energetic, he first had the idea for Red Hot seven years ago, but believes the success of the project is down to capturing the social media zeitgeist last year.
“It’s very much a product of the timing, that we were able to harness social media in that way," he says. "It was Tumblr that actually started it all. I don’t have an account, but my friend Nick Thacker, who works in branding, put the an image of six of the guys on there when I was searching for models, asking ‘Are you red hot? Contact Thomas Knights’. It got reblogged 30,000 times in one night, and he said ‘Tom, this has never happened. You are onto something.’” 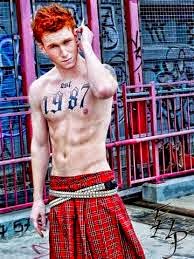 Buoyed by the online response, Knights set up Facebook, Twitter and Instagram accounts and soon expanded the project to include up to 100 men of all shapes and sizes before finding his poster boy Ken Bek.
Born in Denmark, Bek completed military service and worked in a primary school before moving to London. He was working in a Soho juice bar and had never considered modelling before Knights approached him one day, waving his first Red Hot calendar of semi-nude men.
"He skipped to the front of the queue, as is his habit, and asked if I'd be interested in being photographed for his project. To begin with I said no, I didn't know what to think of it," the 21-year old says. He left his card behind, and eventually a friend persuaded him to give Knights a call.
"Thomas posted the Red Hot picture of me, which was the first proper picture ever taken of me, on his Facebook. The next day it was ridiculous, the amount of likes and shares it had. A few people got in touch asking if I'd like to go and meet with some agencies," says Bek. He is now signed by AMCK Models in London, Elite in Paris and New York Models in the States - a career fuelled purely by Red Hot.

Ken Bek's infamous RED HOT shot
"Ken was interesting, because he's very acceptably ginger," says Knights, who chose the image as his book's cover. "He's very safe, but what's great about that one image of him with his tongue out is that it sums up what the project is all about - that sparky, boyish, youthful confidence.
"Within an hour of being on Facebook that picture was liked a thousand times, and we hadn't had anything like that. It was the first shoot he'd ever done, he'd never considered modelling before that. He's really quite known on Instagram now, and it's all down to that one image."
I meet Bek with fellow RED HOT model and friend Tommy Brady, who is training vigorously towards competing in the Rio 2016 Olympics in canoeing. The 22 year-old hits the gym or water two to three times a day, and has also managed to squeeze in the time to do some modelling for Mark Thomas Taylor, Fashion Revolution and People Tree.
"I basically just make sure I'm on schedule and pencil things in as and when I can make it, by putting my training first," he says. "It would be very easy to let my training slip and go out with all the other models all the time, but I've got to where I am because of my sport and that's got to come first until I call it a day."
Bek still works at the juice bar when he's in London, and describes the staff as being "like family to me". He's has found the transition to international sex symbol an incredible ride, though somewhat overwhelming at times.
"Some of the things that are said to me on my social media can be a bit, wow," Bek admits, widening his eyes into a herbal tea he's not sure he likes or not.
"People are always a bit more confident to write things to you, than to say it face-to-face. The men are more straight to the point, unless it's a particular girl," softly-spoken Brady agrees.

Brady is now virtually unrecognisable from his original picture since growing a beard
Bek can only recall a single negative reaction to the project, from a man determined to report many of his pictures for indecency.
"This one guy, particularly when we were in New York, kept commenting on the Red Hot and my Instagram profile being really rude about us not being friendly towards gay people," he says. "He kept commenting everywhere and reporting us, it was really, really weird.
"In the end I wrote him a really, really long message on my Facebook page, which I don't tend to do. It got a lot of positive feedback, and I have a lot of gay friends and fans. It was kind of a bummer, and I shouldn't let that kind of stuff get to me but it does, of course it does."
The pressures of being so prominent on social media can take its toll on relationships, the pair agree.
"I found with one of my relationships, which ended a while ago, that she took quite a lot of offence off other girls liking my pictures. It is hard, but I think if you're with the right person, then it's fine," muses Brady. "They'll understand, but having a social media following can be hard to deal with - it's human nature to have worries or whatever. I think as long as you're sensible about how you use it, you're fine."

RED HOT BOX will feature red-headed women for the first time
Knights has decided to move the project on by introducing shots of three red-headed women for the first time in new exhibition RED HOT BOX opening in London's Covent Garden this week.
“Red-headed women are universally loved, by gay men, other women and straight men. Everything we’ve done has been paving the way for this," he enthuses. "We're already preaching to the converted."
When asked if he fears alienating his original audience by including women in the collection, Knights maintains his philosophy extends to all gingers, not just men.
"I’d be completely mad to discount the countless millions of red-headed women out there, and not include them under the Red Hot umbrella," he says. "The ginger girls get bullied at school too, they just have more prominent role models as adults. The core message of anti-bullying still remains."
Knights is taking the exhibition to Berlin, Canada, Melbourne and New Zealand throughout 2015, and plans on producing an exclusively female calendar for 2016.
"For now, the 2015 male calendar will feature 12 boys completely nude but for a strategically-placed red object, shot in a blue room with different furniture to reflect each person's character," he says. He envisions expanding the Red Hot brand into a factor 50 sun cream range, including other products such a moisturiser which works with skin prone to freckles, and a hair dye for men who go grey - there is, he says, no red hair dye manufactured specifically for grey men.
"At its heart, Red Hot is about being true to who you are, and being proud of who you are," he says emphatically. For Knights, it's clear that not only is the future bright - it really is orange.
Telegraph.co.uk
Over 5.6 Million Reads Adam Gonzalez at December 16, 2014 No comments: