What a Coincidence All of Putin's Contenders Get Poisoned, Alexei Poisoned in Jail


He was the mayor of Moscow and started telling the truths no one dared. When he decided he wanted to run in the one man elections against the one man(Putin), He was jailed, poisoned, beaten, shot outside the Kremlin, now jailed again and while the food there might not be Beluga caviar and the Czars' champagne, people don't die from it. Unless Putin does not like you.

A doctor for Russia's most prominent opposition figure, Alexei Navalny, says she believes he may have been deliberately poisoned after being jailed for organizing pro-democracy demonstrations.
Navalny, a 43-year anti-corruption campaigner and arch-critic of Russian President Vladimir Putin, was taken from his jail cell to hospital Sunday after suffering what initial reports suggested was a severe allergic reaction. But his personal doctor, Anastasia Vassilieva, said she believed he had been exposed to a chemical agent.  n
“We cannot rule out that toxic damage to the skin and mucous membranes by an unknown chemical substance was inflicted with the help of a 'third party,'” she wrote on Facebook.
On Monday, Navalny was discharged from hospital to be returned to jail, where he was serving a 30-day sentence for his role in organizing a major pro-democracy demonstration that was held on Saturday. Vassilieva said that she opposed his discharge, as he required medical supervision, and the results of samples of his hair and clothing she had sent for independent testing had not been returned yet.
Navalny, who led the country's biggest street protests against Putin in 2011, was behind bars Saturday as thousands of young Russians — as many as 15,000, according to liberal Russian media outlets — protested in the streets of central Moscow to demand that independent candidates be allowed to run for city council in September elections.
Nearly 1,400 protesters were detained by baton-wielding police in riot gear, in one of the largest police crackdowns in Russia in a decade, according to the monitoring group OVD-Info. While many were released without charge, monitors said about 150 of the protesters — who chanted slogans such as “Russia without Putin!” — were held overnight Sunday and may face charges this week.
The heavy-handed police response drew swift condemnation from the United States, the European Union, and rights groups. EU spokeswoman Maja Kojiancic said that “the disproportionate use of force,” along with recent detentions of opposition figures, “once again seriously undermine the fundamental freedoms of expression, association and assembly.”
The protests were the latest in a movement that began two weeks ago, after the local election board refused to register several candidates, claiming that they had not gathered enough signatures to qualify, and that some used in support of their applications were forged. Last week, more than 22,000 people rallied in Moscow over the issue, prompting the shocked authorities to take a hardline response by banning Saturday’s rally and arresting Navalny.
Navalny is not believed to be in life-threatening danger. But his mysterious illness has created shockwaves in a country where opposition figures often meet violence: opposition politician Boris Nemtsov was shot dead outside the Kremlin in 2015, and Navalny himself was temporarily blinded in one eye when pro-Kremlin activists attacked him with a chemical dye in 2017.
Navalny’s spokeswoman, Kira Yarmysh, broke the news of the campaigner’s condition Sunday morning, saying he had suffered a “severe allergic reaction,” involving major swelling of the face and skin redness, despite never having had an allergic reaction before.
But Vassilieva later wrote on Facebook after visiting Navalny in his hospital bed that she believed he had been exposed to a toxic substance. “Some toxic agent may be the reason for Alexei Navalny's 'illness',” she wrote. She accused the doctors treating him of not wanting to investigate the source of the illness, which had left him with a rash on his upper body, skin lesions, and discharge from his eye.
“They say he simply has hives. But why are you lying?" she wrote.
At least 10 of Navalny’s supporters who had gathered outside the hospital were detained Sunday night, and in recent days police have also detained a number of other leaders of the protest movement, including Ilya Yashin, Lyubov Sobol, and Dmitry Gudkov.
Andrea Kalan, spokeswoman for the U.S. Embassy in Moscow, tweeted that the Russian authorities, in their mass detention of protesters and disproportionate use of force, were undermining “rights of citizens to participate in the democratic process.”
Natalia Zviagina, Amnesty International’s Russia director, condemned the Russian government’s response to the protest, saying her staff had witnessed several instances of police brutality against the “overwhelmingly peaceful” demonstrators.
“Russian authorities today hit a new low by imposing military law-like security measures on the unsanctioned rally, blocking access to major Moscow streets and shutting down businesses in advance of the demonstration, despite the absence of credible reports of potential violence,” she said.
Despite the harsh crackdown, opposition leaders have vowed to regroup and hold another protest this coming Saturday, in a bid to capitalize on the seething public anger over the brutal police tactics and force the authorities to back down before September’s vote. More than 21,000 people have signed a petition calling on Moscow Mayor Sergei Sobyanin to resign.
"Sergei Sobyanin is no longer the mayor of Moscow," Russian political commentator Konstantin Sonin said in the Vedomosti daily.
Over 5Million Reads Adam Gonzalez at August 05, 2019 No comments: Links to this post

Email ThisBlogThis!Share to TwitterShare to FacebookShare to Pinterest
Labels: Putin-Nolike-Udead 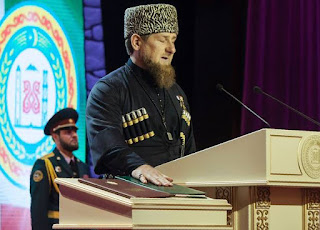 Forty men and women have been detained and at least two have died in an anti-gay purge in Russia's Chechnya republic that is even more brutal than a 2017 crackdown, according to activists.
After the administrator of an LGBT social media group was detained in December, Chechen law enforcement began rounding up suspected homosexuals, LGBT Network said on Monday. It is holding people without charge in an infamous prison where gay men have previously said they were tortured, local residents told activists.
One of the captives died after officials repeatedly cut him with a knife during an interrogation, Igor Kochetkov of LGBT Network told The Telegraph.
“We can already say that the torture being suffered by those detained is savage, much worse than for those detained in 2017,” he said. “We know of two dead, but probably more have been killed.”
For the first time, women are also being systematically detained for presumed homosexuality, he added.
A gay man named Alexander who escaped Chechnya for France told the Russian news site Meduza that 10 people had actually been killed in the latest wave of the anti-LGBT “genocide,” and a friend who was imprisoned had seen bodies being carried away.
A post in a local LGBT social media group last week told gay people to “run from the republic as soon as possible”.
More than 100 were rounded up and at least six died in a crackdown on gay men in the predominantly Muslim republic in 2017. Some were handed over to relatives with the expectation they would be finished off in an “honor killing,” while others had to sign blank criminal charges for possible future use.
LGBT Network has helped 150 people flee since 2017.

Ramzan Kadyrov became the leader of Chechnya, a war-torn republic of 1.4 million people in the Caucasus mountains, in 2007, taking over after his father was assassinated in a bomb blast. The two Kadyrovs had fought against Russian forces for Chechnya's independence in the 1990s but defected to Moscow's side during the second Chechen War.
Accused of kidnappings and extrajudicial executions, Ramzan has stamped out dissent and a simmering Islamist insurgency with often brutal methods. At the same time, he has turned Chechnya into an increasingly conservative Muslim society.
He is seen to have carte blanche from the Kremlin, receiving generous federal funding and a free hand within Chechnya in exchange for keeping the insurgency at bay. Kadyrov's ostentatious displays of loyalty to Vladimir Putin included having thousands of his security forces pledge themselves as “foot soldiers” of the president.
One of Kadyrov's security officers gunned down opposition politician Boris Nemtsov outside the Kremlin in 2015.
The press secretary of Chechnya's strongman ruler Ramzan Kadyrov, who was appointed by Vladimir Putin in 2007, called the latest accusations “lies and disinformation”.
Kadyrov has previously claimed there are no gay men in Chechnya and told the BBC during the World Cup that the reports of the purge were “all made up”.
“The reason this is being repeated is impunity,” Mr Kochetkov said. “The Russian authorities didn't open a criminal case, and Kadyrov felt this impunity.”
The Organisation for Security and Co-operation in Europe in December called on Russia to open an inquiry “in view of the clear evidence of successive purges against LGBTI persons” in Chechnya.
It also called for a criminal investigation into the case of Maxim Lapunov, a gay man who told The Telegraph and others that he was held for 12 days in Chechnya and tortured in 2017.
Police beat him until he couldn't stand, demanding the names of other gay men, he said. Others were tortured with electric shocks.
Mr. Lapunov, an ethnic Russian, was released when relatives from another region came looking for him, but police threatened him to keep quiet.
Russian authorities have repeatedly refused to investigate his complaints. Mr. Putin's human rights ombudswoman said last month a criminal case had not been opened because Mr. Lapunov had left Russia for Estonia. He fled there fearing for his safety.
Police have now been hunting down contacts from the phones of the administrator of the LGBT social media group and subsequent people they detained, according to Mr Kochetkov.
Some have been released, but in a new development, their passports were ripped up to keep them from leaving Chechnya, he said.
“If we don't stop this now it could develop further, so it's very important to spread this information and put pressure on Moscow,” he said.
Human rights groups and the British government have also called on Moscow to take action against the repressions in Chechnya, where Mr. Kadyrov wields absolute power over a fearful populace.
Last year, police began detaining teenagers en masse after five boys pledged allegiance to the Islamic State and were killed in attacks on police, The Telegraph reported. Other young people have been imprisoned on extremely flimsy terrorism accusations, and 27 were killed without trial in a mass execution in January 2017, according to an investigation by Novaya Gazeta newspaper.
Over 5Million Reads Adam Gonzalez at January 15, 2019 No comments: Links to this post