Brunei to Europe (Not US, They Know Trump Feelings) Not To Worry We Wont Stone Too Many Gays To Death

If a law described by the international community as "appalling" is passed but rarely enforced, is it still appalling?
Brunei, the Southeast Asian nation that recently implemented just such a law, is evidently hoping that the answer to that will somehow be no.
Earlier this month, gay sex and adultery became punishable by death by stoning in Brunei, a small but oil-rich state with a Muslim majority on the island of Borneo.
Homosexuality has been illegal in Brunei since it was a British colony, but the new laws made it - and extramarital affairs - punishable by gruesome death.
This week, Brunei made the case to the European Union that it shouldn't worry about death by stoning because such punishments would be quite rare.
In a letter and memo sent ahead of a European Parliament meeting on human rights, the Brunei mission wrote:
"The penal sentences for hadd - stoning to death and amputation, imposed for offences of theft, robbery, adultery and sodomy have extremely high evidentiary threshold, requiring no less than two or four men of high moral standing and piety as witnesses - to the exclusion of every form of circumstantial evidence, coupled with very high standard of proof of 'no doubt at all,' which goes further than the common law standard of 'beyond reasonable doubt.' The standards of piety of the male witnesses is extremely high that it is extremely difficult to find one in this day and age, to the extent that convictions of hadd may solely rest on confessions of the offender."
Another mitigating factor presented by Brunei: The lesser punishment of whipping can be carried out only by people of the same gender.
The European Union is unlikely to be sympathetic. It has noted that such punishments - no matter who carries them out - violate the Convention against Torture and Other Cruel, Inhuman or Degrading Treatment or Punishment, which Brunei signed in 2015.
What's more, the EU isn't the only European institution that has expressed concern over Brunei's new laws. Today, Aberdeen University in Scotland revoked the Sultan's honorary degree over the measures.
"The University of Aberdeen is proud of our foundational purpose of being open to all and dedicated to the pursuit of truth in the service of others. The introduction by the Sultan of the new Penal Code is contrary to our strong commitment to the value of diversity and inclusion," said university principal George Boyne.
A variety of companies, from a British TV awards show to the Financial Times, have also joined a boycott of hotels owned by Brunei, heeding a call from, among others, George Clooney. He said in late March, "Every single time we stay at, or take meetings at or dine at any of these nine hotels, we are putting money directly into the pockets of men who choose to stone and whip to death their own citizens for being gay or accused of adultery."
Over 5.6 Million Reads Adam Gonzalez at April 19, 2019 No comments: 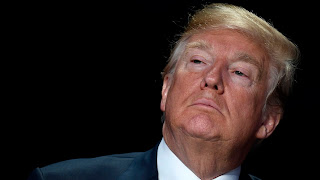 The President had three things to say on Twitter about the Parkland school shooting in the 18 hours after it occurred.
First, condolences for the victims and a lament that no child or teacher should feel unsafe at school. Second, assurance that the federal government would work with authorities in Florida and the governor there. Third, blame that there were clues missed as to the shooter's mental fitness and his ability to legally buy the AR-15 used to go on the rampage.
Here's that third tweet, offered at 7:12 a.m., ET on Thursday, less than 24 hours after the shooting: "So many signs that the Florida shooter was mentally disturbed, even expelled from school for bad and erratic behavior. Neighbors and classmates knew he was a big problem. Must always report such instances to authorities, again and again!" 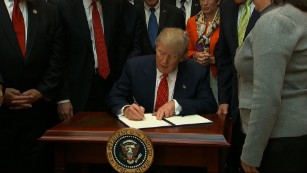 Trump signs bill nixing Obama-era guns rule
What Trump doesn't mention is what exactly he and his administration will do about gun violence or about school shootings, which feel like an epidemic.
After other recent shootings, including the one that killed more than 50 people attending an open air concert in Las Vegas last fall, he promised that there would be a time to talk about gun regulations.

That time has not yet come.
But there is one important thing Trump has done on the issue of gun control during his time in office.
A little less than a year ago, on February 28, 2017, he signed a measure nixing a regulation aimed at keeping guns out of the hands of some severely mentally ill people. It's critical to note that it's not at all clear it would have applied to the shooters in Florida nor Las Vegas, and there's no reason to believe it would have stopped the massacre.
Read the full bill text here.
Here's the description of that rule CNN published last year in a story by Ted Barrett and Deirdre Walsh: 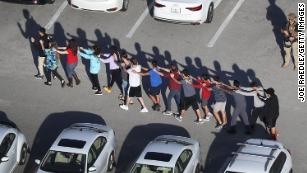 10 things the Parkland school shooting won't change
The regulation, finalized in December under Obama's tenure, required the Social Security Administration to disclose information quarterly to the national gun background check system about certain people with mental illness.
While the list of eligible mental disorders is long -- ranging from anxiety to eating disorders to schizophrenia -- those who would have been reported by the agency had to meet two main criteria: a) They were receiving full disability benefits because of a mental illness and couldn't work and b) they were unable to manage their own benefits, thus needing the help of a third party to do so.
It's also not clear -- and perhaps unlikely -- that the man accused of terrorizing the high school in Parkland and killing 17 people there would have met either of the criteria laid out to be reported under that rule.
What's more, the rule Trump rescinded was opposed by both the American Civil Liberties Union and the National Rifle Association, so it wasn't exactly universally hailed. 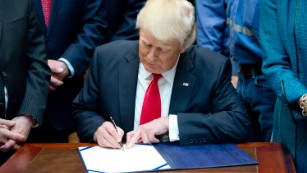 These are the bills Trump signed into law in his first year as President
Related: Gun lobbyist helped write ATF official's proposal to deregulate
But it's also true that it was a rule aimed at keeping guns out of the hands of the mentally ill. And almost the first thing the President did after this most recent shooting was to complain that the shooter's mental illness hadn't been reported.
Trump was clear in his first spoken remarks, broadcast from the White House before noon Thursday, that any action must actually be effective.
"It is not enough to simply take actions that make us feel like we are making a difference. We must actually make that difference," he said.
There is no panacea piece of legislation to keep guns out of the hands of just the people who would go on a murderous spree. The shooters in mass shootings seem to share the problem of being troubled, but the clues missed by those around them are different. In the coming days and weeks, we'll learn why this one slipped through the cracks.
But the laws in this country continue to move in the other direction -- away from regulation. New York magazine documented the ways in which they believe the Trump administration and Congress have actually tried to make it easier for certain groups to buy guns over the past year. It's a not insignificant amount.
One of those ways is that in Trump's budget, on page 719, as HuffPost points out, the White House suggests cutting $12 million from the federal program that helps states maintain the background check system.

These are the victims of the Florida school shooting
The White House budget is unlikely to become law, but it is important as a statement of priorities.
Related: Why Congress is hesitant to pass gun control, by the numbers
And priorities are key in the gun debate, or lack thereof. CNN's Harry Enten wrote Wednesday that you shouldn't expect much from Congress in the wake of this (or any) shooting since the issue of guns is one of the most polarizing and misunderstood.
The priorities are clear that it's not likely any gun legislation is going to pass the House or the Senate, and it's unlikely Trump will propose anything new.
Correction: This story has been updated to correct the day on which Trump spoke.
Analysis by Z. Byron Wolf, CNN
CNN's Jenny Hansler contributed to this report.

Gun Related Deaths in the US-Interactive