In Nepal, you see policemen holding hands as they go out on patrol:

So, why is this practice completely normal in Nepal, but unacceptable in the West? I'd suggest two reasons:

In the past, unmarried young men didn't have the freedom to be physically close with women, except their mothers. Psychologists tell us that touch is fundamental to human communication, bonding and health. So, physical closeness between young men -- arms around shoulders, or holding hands -- provided an opportunity for that essential "intimacy." Unmarried men and women seem to have more physical contact now, but the relaxed physical intimacy between men remains part of the culture.
Probably the West's chief deterrent to public displays of male bonding is the terror of being perceived as homosexual. Even if being gay is more accepted than ever, straight men often feel compelled to proclaim their heterosexuality, shining a spotlight on that continuing dread of being thought "queer."

Perhaps the more a society accepts homosexuality, the less comfortable straight men will feel displaying affection for male friends, unless their team has just scored a touchdown! Until very recently, most Nepalis knew little about homosexuality, and it would never occur to them that two men holding hands might be gay.


Since first coming to Nepal in 2001, I now see fewer displays of affection among young men. This observation may be the flip side to Nepal's recently becoming the first Asian country to accept gay marriages.

While Nimesh's grandfather was completely comfortable reaching for my hand, I'd bet that Nimesh's son -- many years from now -- won't be so inclined. My fear is that future generations of young people will only reach out for their computer mouse or their iPhone... but not for someone else's hand.

Sad.
{site; Aging Parkinson's and me} 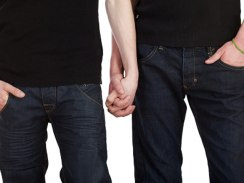 More than half of gay men in Britain do not feel comfortable holding hands with a partner in the street, a survey of 5,000 LGBT people has revealed.
One in five lesbian, gay, bisexual and transgender respondents to Stonewall's pollsaid they had experienced a hate crime in the past year.
They ranged from abuse to assault, but 81% of victims did not go to police.
The Home Office said all hate crime was "completely unacceptable" and "should be met with the full force of the law".
Stonewall said the UK had much to do before all LGBT people "can feel safe, included and free to be themselves".
While hate crime was more effectively recorded than in the past, the charity said there had undoubtedly been "a genuine increase" in incidents since its last major survey in 2013.
The 2017 poll - timed to coincide with a major new campaign, Come Out for LGBT - also found:
The report also highlights the daily discrimination LGBT people face, for example in shops or when attempting to access public services.

One in 10 respondents said they had suffered problems trying to either rent or buy a property.
One in six said their sexuality had been an issue in cafes or restaurants, while 10% of those who have attended a live sporting event claim to have been discriminated against.
The report includes harrowing accounts, such as that of Ava, a 56-year-old from London, who said: "Someone described their intention to slit my throat and kill me.
"They went on to say no court would convict them for killing 'the queer bait'."
Elijah, a 19-year-old from south-east England, said: "I live in constant fear of being attacked again due to my gender identity."

Stonewall says its research highlights the "shocking levels of hate crime and discrimination that LGBT people still face in Britain today".
Chief executive Ruth Hunt said: "At Stonewall, we want everyone across Britain who feels impacted by reading this report to join our campaign and pledge to come out for LGBT people everywhere, as visible allies."
Stonewall has made a number of recommendations, including:

Minister for countering extremism Baroness Williams said all forms of hate crime were unacceptable and the Home Office was working to improve the response to such incidents, including ensuring victims had the confidence to come forward.
"We are clear there can be absolutely no excuse for targeting someone because of their gender identity or sexual orientation. We put victims at the heart of everything we do, which is why we work closely with partners to support victims of LGBT hate crime."
David Isaac, chairman of the Equality and Human Rights Commission, reiterated the desire to see an end to what he called "a hierarchy of hate crime".
"All hate crime is abhorrent. LGBT people, like everyone else, have the right to live safely in the community," he said.
"That is why we want the government to conduct a full review of hate crime legislation and sentencing guidance."
BBC
Over 5.6 Million Reads Adam Gonzalez at September 08, 2017 No comments: Links to this post