Trump Buys Second Hand Presidential Plane for The Next President

The US Air Force announced Friday that it has finalized a deal to purchase two already-built aircraft from Boeing to serve as the next generation of Air Force One, flying future presidents around the world for decades to come. A Boeing spokesperson told CNN the two aircraft in question were originally destined for a now bankrupt Russian airline.

Trump said the new Presidential plane (airforce one) was too expensive and he was going to cancel. He wanted to save the tax payers money!  He knew he would never fly that plane anyways since it would not be ready for service after 2024. What did he cared about cancelling on reasons of saving money ? Would be a good sound bite.

Actually He likes flying his own plane which is a mini Trump Tower except the Air force will pay for modifications and Fuel, paint job to say US Airforce instead of Trump. It seems this has already been done because we’ve seen Trump flying in a similar plane to his old(new) plane (I bet his old pilot is flying it too except the slary would come from US Treasury, just guessing on the pilot).

All the modifications to these two 747 planes plus all the expenses done to them is not going to be cheap. Boeing says they are new because only they have flown it in tests. You be the judge.

When you see them there taxi there is no difference on the outside because they are basically the same plane as the now 747 except it was built in latter years but not last year, more like last decade.....The price of retrofitting  these 747’s would probably exceed a new plane built brand new and have everything incorporated in the factory as is being built or finished there. Do you imagine the money to keep the two antiques flying opposite a new planes. These two old 747’s which were destined for Russia, then Iran when the Russian company could not pay for them(bankrupcy they say) and then Iran passed, they wanted something newer and bigger. Trump will have these old elephants painted and retrofitted with new modifications which anybody knows you don’t do to your car unless you keeping it as an antigue. You buy a brand new one with what you want in it. Particularly if you want a lot done! Then if you are a “good negotiator” you get the top of the line not a 12 year old car laying around because it could not be sold.  Go ahead laugh but you are paying for it because a top negotiator with a University to teach people the art of the deal went for the old ones on the side, dusty amd all. But then you will not find Trump getting in any of these two planes, not to even check them out so the negotiator does not care. May be he is a good ngotiator when it belongs to him not uncle Sam. He is buying for a President in the future (with old planes) 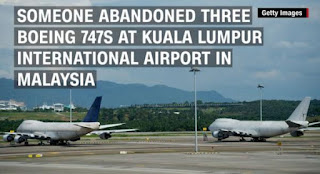 This is another illussion from Trump. 'I will save you money on the AF program'  which is not happening. Boeing has to make money on this, they are not giving the planes away. Actually Iam so sure that if this planes was going to be ready by 2019 instead of 2024 the earliest,  Trump will be adding stuff to them with a brand new plane design for the mission and his comfort!
Does anyone with a fair mind and not in love with Trump really thinks Trump cares about these planes or the next president if its not going to be him? Why is he doing this?

First, it saves him money in the current budget because it postpones the expense for latter, rather than go with had been designed already. Secondly it allows him, like he did (first decision even before he was sworn in) to say he is a good negotiator (it shows the opposite, big time) and he cares about the American people 's money. If this was so why is he making money from his government in everything from keeping the name Trump in the hotels and keep tied to them thru their families. Even the secret service on Trump tower was kicked out because they would not pay the amount of money they wanted. Where is he secret service today in NYC? In a van parked by the sidewalk. I will say no more.


We thought we share this with you.  The Presidential planes might not be called second hand because they might have never left Boeing legal papers for the buyer and there was at least one but it most likely made trips to Russia and Iran which were supposed to be buyers. Originally built for Russia. I think the correct name is old because if a plane sits through the years and no body buys it it doesn't because second hand but it becomes old. I did not want to use the adj. old on the tittle, people might not believe it.

Over 5Million Reads Adam Gonzalez at August 07, 2017 No comments: Links to this post