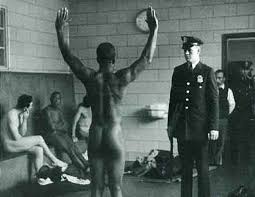 BBC
Nearly half of all US adults have had an immediate family member incarcerated at some point in their lives, according to a new study.
Researchers also reported one in seven adults have seen immediate family incarcerated for over a year, with minorities most impacted.
The study by criminal justice non-profit FWD.us and Cornell University surveyed over 4,000 American adults.
Over 2 million Americans are currently in prison in the US.
The report estimates 64% of US adults have had someone in their family spend at least one night in jail or prison.
The study's authors said it pointed to a nationwide "incarceration crisis".
"These numbers are stunning, all the more so if you think of them not as numbers but as stories like mine," Felicity Rose, FWD director said in a foreword to the report.
"One of the worst parts of growing up with a father in and out of prison was the isolation and shame I felt," she added.
One in five US adults has had a parent incarcerated, according to the study, resulting in serious financial and emotional consequences.
What were the findings?
The study said that 113 million US adults have had an immediate family member incarcerated.
At the time of the research, 6.5 million adults said an immediate family member was currently in jail or prison.
One in seven adults have had a spouse incarcerated; one in eight have had a child locked up. And only one in four are ever able to visit an incarcerated family member.
There was no difference in incarceration rates along political lines, but the researchers did find that people of colour were most negatively impacted.
African American adults were 50% more likely than white Americans to have had a family member jailed, and three times as likely to have family jailed for 10 years or more, found the research.
Latino adults were 70% more likely than white Americans to have a loved one incarcerated for over a year.
Low income families were also disproportionately affected, with adults making less than $25,000 (£19,000) a year 61% more likely to have family incarcerated than those earning over $100,000 a year.
And 54% of jailed parents were the breadwinners of their families.
Incarceration rates were highest in the southern and western states, with residents 60% more likely to experience family incarceration than people in the northeast.
According to the Prison Policy Initiative, the US incarcerates more people per capita than anywhere else in the world.
FWD reports local jails have admitted over 10 million people every year for the past two decades.
Despite recent declines in imprisonment rates, the US still incarcerates 710 people per 100,000.
The UK's incarceration rate is 147 per 100,000, according to FWD.
Rikers an American Jail~ This blog highly recomends this film by PBS
RIKERS An American Jail
Click the link above or go to PBS

Over 5Million Reads Adam Gonzalez at December 07, 2018 No comments: Links to this post