As I read this article I could not but think of the United States 35%. People that will sleep with the devil himself so they won't have to deal with the realities of life. Nationalism cannot be greater than the human rights for those, unlike those so-called nationalists. If we learn anything from exploring outer space and confronting what waits for us in the way of knowledge or something much more sinister than that I would imagine that maybe nationalism will be replaced by being human or even humanoids and sticking together as such..Adam

Some members of the Serbian public expressed astonishment after the popular Belgrade weekly magazine Politikin Zabavnik published an article which many readers felt glossed over the war crimes of local Nazi collaborators.
Titled “Who were Ljotićevci?” (“Who were Ljotić's men?”) and published on the January 18 edition, the article presents the Serbian Volunteer Corps, a local association of the Nazi regime during the Second World War, in a rather positive light.
With its name roughly translating as “Politika's Fun Paper” or “Politika's Entertainer”, the publication is targeted at “all ages from 7 to 107″ and is widely perceived as family fare. Founded in 1939, it enjoyed a cult status all over Yugoslavia as the epitome of high-quality edutainment, providing an encyclopedic mix of general knowledge, trivia, short stories, history, science, travel, and music, with about 50 percent of its pages devoted to quality comics.
Both media professionals and readers decried what they saw as the magazine's betrayal of its cosmopolitan and progressive values. They considered the article an act of final submission by the paper to Serbia's right-wing populist government, which has been rehabilitating the legacies of World War II Nazi collaborators.
Nazi occupiers and their associates killed around 140.000 people in Serbia, conducting genocide against over 20.000 Jews and about 12-20.000 Roma.
On January 20, 2019, the Independent Association of Journalists of Serbia (NUNS) and the Independent Society of Journalists of Vojvodina (NDNV) called the article “the most pitiful of all kinds of media manipulations — manipulating children.” They noted that the magazine spreads “gruesome praises” about Dimitrije Ljotić, a Holocaust perpetrator, misinforming that “he condemned the pogrom of Jews.”

Historical revisionism has become part of our daily existence, and the Fascist, Nazi and other quisling and collaborationist forces are investing enormous efforts to promote historical forgeries.

Some social media users reacted by providing documentary evidence from that period:

This photograph shows their help for Roma people. Ljotić's men take them to be executed by shooting. 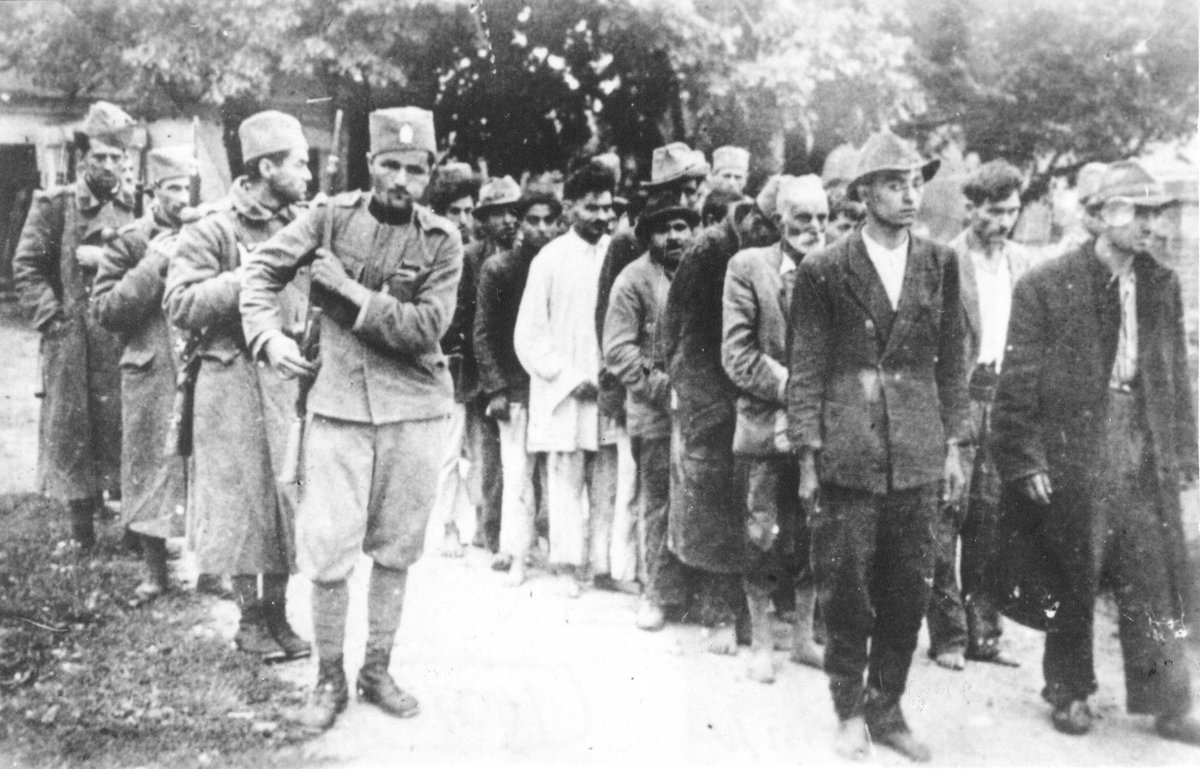 Dimitrije Ljotić WAS a local Nazi and organized an army, the Serbian Volunteer Corps (Serbischer SS-Freiwilligen Korps in German) which served the Wehrmacht.
The ideology of this corps was identical to the Nazis: extermination of Jews, Communists and Western capitalism. The corps became infamous for crimes against civilians, especially against Jews and Roma, against the partisans and other members of the resistance movement. Ljotić's units participated in the killing of students during October 1941 Kragujevac Massacre. A day after this massacre, his organization ZBOR opened the biggest anti-semitic exhibition in Belgrade, the so-called ‘Anti-masonic exibition’, aimed at ‘revealing the Judaeo-Communist plot’, while pro-Ljotić newspapers suggested that ‘Serbs should not wait for the Germans to start the extermination of Jews’.

Why is Politikin Zabavnik so important to so many?

Unlike the countries of the Soviet Bloc, the publishing industry in independent socialist Yugoslavia enjoyed a higher degree of freedom and imported much of its contents from the West. By the 1970s, publishers of magazines on a wide range of general interest topics, comics, pulp fiction, music, and even erotica/porn became self-sustainable by catering to the sizable middle class.
Politikin Zabavnik's circulation surpassed 300,000 in the “golden days” of the 1970s and early 1980s. Its mission was to build a “cultural infrastructure”, “develop ethical values” and nurture integrative Yugoslav patriotism.
The paper was published in Cyrillic (Serbian) and Latin (Croatian) versions, as well as in the Slovenian language. Its history sections would promote the anti-fascist values of the People's Liberation War, as well as the heritage of all peoples comprising the federation.
After the breakup of Yugoslavia in the 1990s, most of the Serbian media conformed with Slobodan Milošević‘s nationalist ideologies. Over time Politikin Zabavnik adapted to this new market reality by including more topics about narrow Serbian history and tradition.
Foreign observers have been warning that the publication increasingly promotes nationalism and extremist right-wing values, but this had little resonance with the Serbian public until the current scandal: 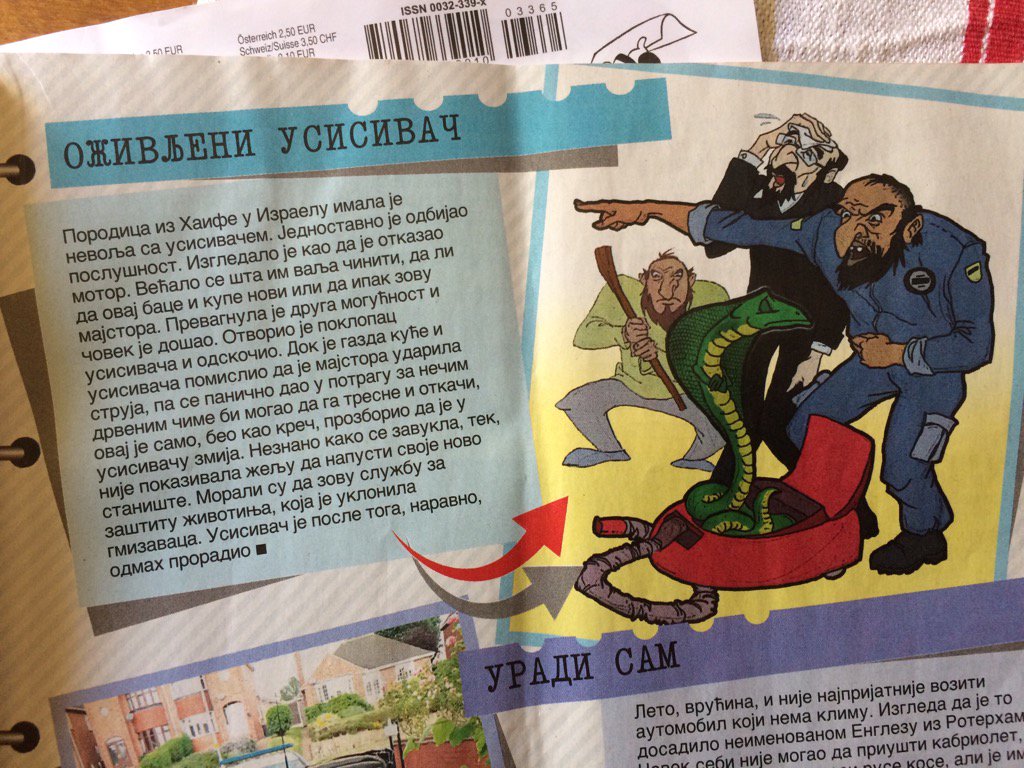 On Sunday morning I would go to the local shop, buy Carnex pork liver pate and Coca Cola. On the way back I would buy Politikin Zabavnik. I would come home, sit in the kitchen, eat the pate with bread and the CC and read Politikin Zabavnik. It was my indulgence as a kid. Those were my 1980s. These are the memories that you managed to soil, you stinky animals.

Another user tweeted an image of the paper's well-known logo – Donald Duck as newspaper seller — replaced with the Disney character's presentation on the Oscar-winning cartoon Der Fuehrer’s Face:

And this is how Politikin Zabavnik screwed itself…

An apology — and a new article

The magazine's following edition, published on January 26, ran a new article titled “Who Ljotićevci [Ljotić's men] really were”, along with an introduction that was also posted on the magazine's Facebook page:

Politikin Zabavnik didn't intend to relativize the role of the criminal units of the ZBOR organization, nor the role of Dimitrije Ljotić and their crimes during the Second World War!
We apologize to all who understood our text in that manner, and in particular to the Jewish and Roma communities!

This new version was a more factual account about the fascist nature of Ljotić's movement, and even included the photo of them leading Roma to slaughter that had been widely shared on Twitter.
NUNS and NDNV reacted again, saying that while the new article condemned Ljotić's men, it also rehabilitated other domestic traitors who collaborated with the Nazi occupiers (this time the Chetniks), and soiled the reputation of communists, supposedly using the excuse “for the promotion of anti-anti-fascism.”
The Politikin Zabavnik scandal exposes the deep polarization of Serbian society, the result of the use of nationalism as a tool to exploit the divisions between liberal citizens and their compatriots persuaded to consider ethnic identity as a key factor in determining if someone should be praised or condemned.

Written byFilip Stojanovski
Over 5Million Reads Adam Gonzalez at February 01, 2019 No comments: Links to this post