Cohen Drops Lawsuit Against Buzz-feed, Fusion in Connection to "The Dossier"

Cohen dropped the lawsuit about the publication of the "Dossier". Why drop it and why now? This was a publicity case to discredit the dossier's information. Why Now? As time goes by the "Dossier" gains importance and credibility since investigators are being able to put the pieaces together and confirm the information they already got from interviews in Mueller's case and the NY investigation and even senate investigators with what is in the dossier.  The timing also tells you we will soon find out what's in the dossier.  Adam🦊 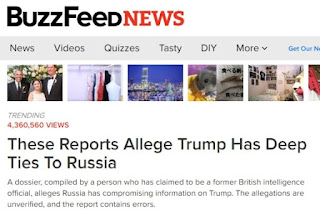 Embattled attorney Michael Cohen has dropped a pair of much-touted libel suits against BuzzFeed and the private investigation firm Fusion GPS over publication of the so-called dossier detailing alleged ties between President Donald Trump and Russia.

Cohen abandoned the suits late Wednesday as he continues to fight to recover documents and electronic files seized from his home, office and hotel room last week by federal authorities as part of what appears to be a broad criminal investigation into his conduct.

"The decision to voluntarily discontinue these cases was a difficult one," Cohen's attorney David Schwartz said. "We believe the defendants defamed my client, and vindicating Mr. Cohen’s rights was — and still remains — important. But given the events that have unfolded, and the time, attention, and resources needed to prosecute these matters, we have dismissed the matters, despite their merits."

The dossier claims that Cohen met with Russian operatives somewhere in Europe, including Prague, to attend a meeting to “clean up the mess” created by public disclosures of other Trump associates’ reported ties to Russia.

In statements, both BuzzFeed and Fusion GPS said the suit was without merit.

"If there's one thing Democrats and Republicans agree on today, it's that the dossier was an important part of the government's investigation into potential collusion between the Trump Campaign and Russia," BuzzFeed News said in a statement.

In a separate statement, Fusion GPS said: "With his decision, it appears that Mr. Cohen can now focus on his many other legal travails.”

Dropping the suits could help Cohen avoid being questioned by lawyers from Fusion GPS or having to turn over evidence related to the case — both steps that could undercut his defense in the criminal probe.

Over 5Million Reads Adam Gonzalez at April 20, 2018 No comments: Links to this post