SOLDIERS Soldiers forced young recruits to rape each other in a vile besting initiation ceremony, it has been claimed.

The two soldiers serving at Pirbright Barracks in Surrey were allegedly forced to degrade themselves in front of more senior troops.

They had joined 2 Company and had completed seven months arduous training in Catterick, North Yorkshire.

Before watching a Wales v Uruguay World Cup rugby match, the men, aged 23 and 28, were told to get showered and come upstairs for some drinks.

The Sun on Sunday understands the new recruits were then pressured into removing their clothes as part of an initiation ceremony to the Queen's Guards.

The barracks is home to The Welsh Guards, part of the Household Division of soldiers who guard the Queen.

The pair were then allegedly made to carry out sex acts on each other. Soldiers gathered round them and filmed footage which was posted on WhatsApp and SnapChat.

A source told The Sun on Sunday that 2 Company is often known as 'The Gay Company', adding the footage was 'horrific' and was 'worse than anything I have ever known in the Army'. 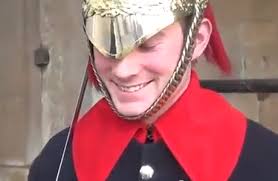 'It was totally out of control and the older and more senior guys were obviously ordering them to do what they did,' they said.

‘The two guys must both have been terrified.

'They had no choice in what they were doing, it was bullying at its absolute worst. People should be in jail for this.'

One of the men is set to be discharged by the Army because of psychiatric problems he has had since the ordeal.

The men who can't be identified because of legal reasons were bullied the next morning at breakfast as videos of the graphic episode spread round the barracks.

The footage is believed to have been sent to the Officers' Mess and one reported it to the victims' Regimental Sergeant Major.

An Army investigation was then launched and the Military Police were involved.

One soldier is reported to have been disciplined and five others punished.

Surrey Police is said to have opened an investigation but a spokesman has yet to confirm this.

Pirbright is close to Deepcut barracks which was embroiled in scandal when four recruits died over seven years in mystery shootings.

Private Cheryl James, 18, died at Deepcut in 1995 after completing a 10-week training course. Her death is being re-examined at an inquest.

An Army spokesman said: 'We can confirm an incident did take place and details were referred to the Royal Military Police for an initial investigation. No allegations of coercive or criminal behaviour were made.

'However this behaviour is unacceptable and administrative action was taken against those present, with disciplinary measures taken against one individual.'

nzherald.co.nz
Over 5.6 Million Reads Adam Gonzalez at March 23, 2016 No comments: Links to this post