What the F_NFL? New Capitalism demands big names to pay to perform Not get paid 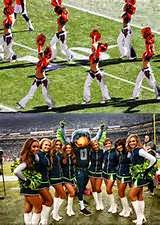 The National Football League may bring in $10 billion in revenue a year, but it is still pinching pennies.
Several weeks ago, as the NFL informed Katy Perry, Rihanna and Coldplay that they were the leading candidates to perform at the Super Bowl XLIX halftime show, the league asked at least some of the acts if they would share some of their future tour income, or make some other financial contribution, in exchange for the gig, according to people familiar with the matter.
The reason: the NFL—which takes in about $5 billion a year from media and television rights deals, according to sports-marketing research firm Navigate Research—was looking for a way to defray the halftime show’s production costs, which have grown to $10 million, up from $8 million a few years ago, according to a person familiar with the matter.
Until recently, the league’s deal with the halftime show’s title sponsor has covered these production costs, according to another person familiar with the matter, so that the show essentially cost the league nothing. The NFL declined to say whether that is still the case. PepsiCo Inc., the halftime show’s sponsor since 2013, declined to disclose its sponsorship costs.
The NFL doesn’t pay artists a performance fee but does cover their production and travel expenses. None of this year’s candidates are likely to agree to pay, according to people familiar with the matter.
Most of the money the league reaps directly from the Super Bowl comes from merchandise and ticket sales, since the broadcasters generally sell the advertising. The NFL sells the rights to broadcast the Super Bowl as part of an overall package that includes every game – and such TV deals account for most of the NFL’s annual income.
The league grosses roughly $40 million to $50 million from Super Bowl ticket sales, according to a person familiar with the matter, and millions more from Super Bowl memorabilia. The NFL’s net profit from the Super Bowl has generally amounted about one-third of its gross revenue, this person said.
Its costs include compensating players for their participation in the game, a sum that will total about $7.5 million for the 2015 Super Bowl. It must also pay the league office staff, game-production costs and expenses surrounding other Super Bowl week events.
Halftime show costs began to escalate in 1993, when that year’s performer, Michael Jackson, managed to keep viewers tuned in, despite the lack of competitive tension in the game itself.  The Dallas Cowboys crushed the Buffalo Bills 52-17 in Super Bowl XXVII, with an 18-point lead at the half.
In previous years, viewers had tended to change the channel halfway through such lopsided blowouts. The 1992 halftime show, for example, was a celebration of winter entitled “Winter Magic.” Former Olympic champions Brian Boitano and Dorothy Hamill skated around on sheets of Teflon on the field; singer-songwriter Gloria Estefan sang for show’s finale.
Since then, the league has made a point of enlisting big-name artists as the centerpiece of the halftime show to drive ratings, though the actual games have also been drawing more viewers as they’ve become more competitive and the league’s popularity has soared.

Over 5.6 Million Reads Adam Gonzalez at August 22, 2014 No comments: Links to this post