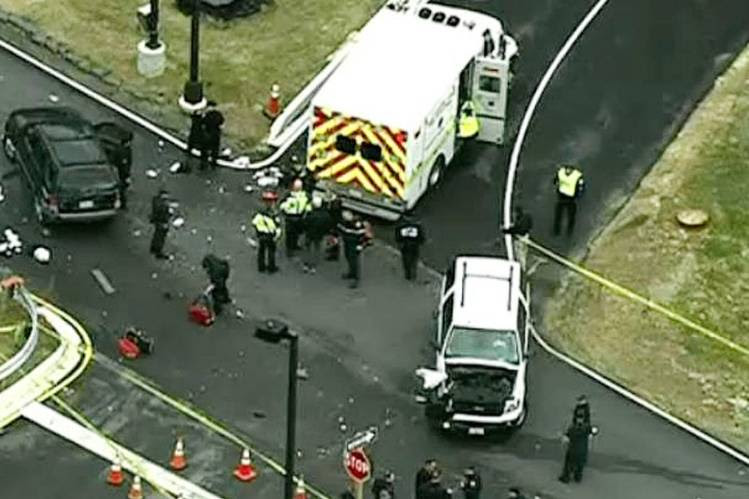 Authorities investigate the scene of an alleged gate-crashing incident near a National Security Agency gate to Fort Meade on Monday, March 30, 2015. PHOTO: WJLA-TV/ASSOCIATED PRESS
One person died Monday after two people tried to drive through a gate at the National Security Agency south of Baltimore, prompting NSA police to shoot at the car before it crashed into a police vehicle blocking a road, the agency said.
The Federal Bureau of Investigation doesn’t believe the incident, outside the sprawling Fort Meade military installation, is related to terrorism, a spokeswoman said. The NSA said the incident was contained to the “vehicle control point area” on the edge of the secure campus.
Authorities didn’t discuss a possible motive or release details about the two individuals. The NSA said in a statement that one of the vehicle’s occupants died at the scene; no cause of death has been determined. The other occupant was taken to a hospital for treatment, as was an NSA police officer who was injured.
The incident began shortly before 9 a.m., when the vehicle in which the pair were traveling attempted an unauthorized entry at the NSA gate, according to the NSA statement. When the driver ignored a police officer’s instructions to exit the campus, barriers were deployed. 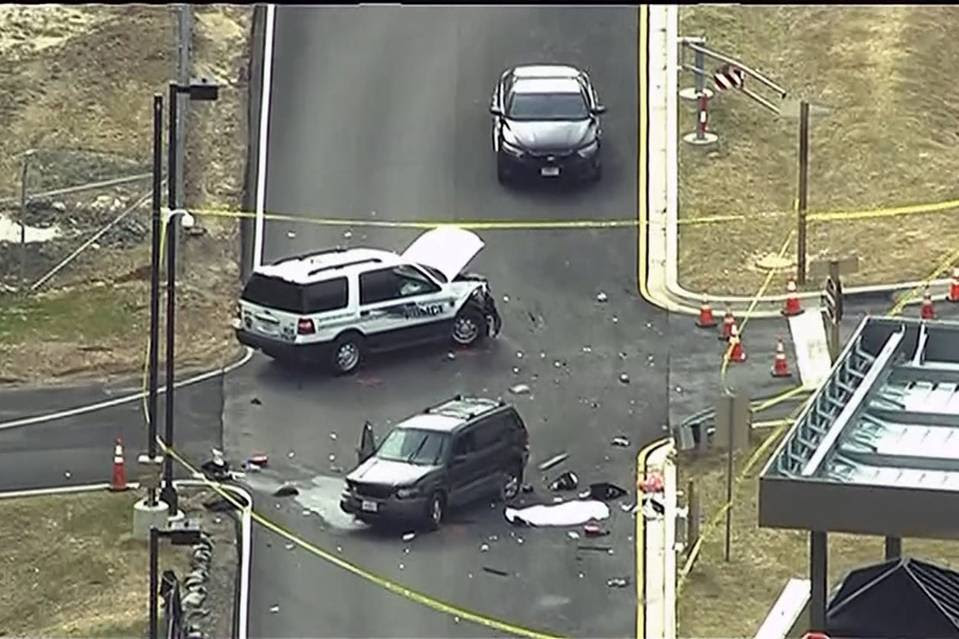 ENLARGE An aerial view of a Fort Meade gate in the aftermath of what officials called a gate-crashing incident on March 30, 2015. PHOTO: NBC4WASHINGTON/REUTERS
The vehicle then accelerated toward the police vehicle, and police opened fire before the collision occurred, the NSA said. Local television showed two damaged vehicles near a gate and debris in the road.
President Barack Obama was briefed on the incident, White House spokesman Eric Schultz said. He referred additional questions to the NSA.
About 14,300 military personnel work at Fort Meade, along with about 37,000 civilian and contract employees, according to the installation, giving it the third-largest workforce among Army installations in the U.S. It says it is Maryland’s largest employer. About 10,000 service members and civilians live there.
All branches of the military are represented at Fort Meade, along with federal agencies such as the Defense Information Systems Agency, the U.S. Cyber Command and the NSA.

SCOTT CALVERT
Write to Scott Calvert at scott.calvert@wsj.com
Over 5.6 Million Reads Adam Gonzalez at March 30, 2015 No comments: Links to this post