A man a woman and a broken bottle

12/25/2009
GAY ACTIVISTS CRASH 'WIFE BEATER' SEN. MONSERRATE'S XMAS PARTY
Some activists aren't allowing state senator Hiram Monserrate to forget the anti-gay marriage vote he stuffed in the Christmas stockings of gay and lesbian New Yorkers.
On the anniversary of Monserrate slashing his girlfriend's face, activists from The Power crashed the senator's Queens Christmas party before being escorted out.
Shouted the activists, "Hiram's a wife beater! He can get married and we can't! How can wife beaters get married and we can't? Hiram believes marriage believes marriage should be between one man, one woman, and a broken bottle."
POSTED 3:53 PM EST BY ANDY TOWLE IN CHRIST
Over 5.6 Million Reads Adam Gonzalez at December 26, 2009 No comments: Links to this post 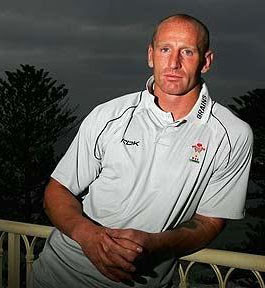 "I've been through all sorts of emotions with this, tears, anger and absolute despair. I wasn't sure if I ever wanted to let people know, and, to be honest, I feel anxious about people's reactions and the effect it might have on my family. It's been really tough for me, hiding who I really am, and I don't want it to be like that for the next young person who wants to play rugby, or some frightened young kid. I don't know if my life is going to be easier because I'm out, but if it helps someone else, if it makes one young lad pick up the phone to ChildLine, then it will have been worth it. My parents, my family and my friends all love me and accept me for who I am, and even if the public are upset by this, I know the love of those people who mean the most to me will never change. I'm not going on a crusade, but I'm proud of who I am. I feel I have achieved everything I could ever possibly have hoped to achieve out of rugby, and I did it being gay. I want to send a positive message to other gay people that they can do it, too."

Much more at the Daily Mail...

Former Australian rugby star Ian Roberts, who came out late in his career in 1995, told theSun Herald: "It's great that the times have allowed for it. It's so bewildering to me that other people haven't allowed for that to happen to themselves. There are so many gay sportspeople ... gay people playing league. I'm just like, 'How can you be controlled by all these other people?' It doesn't have to be a problem, as long as you don't allow it to be a problem. I think it's great ... at long last someone else has done it! It's almost like, that's the breaking of the ice for me. The fact that someone else has done it, it shows that it can happen and it does happen."

Over 5.6 Million Reads Adam Gonzalez at December 19, 2009 No comments: Links to this post

A Clip from " A Single Man"

"A sucker born every minute" What goes around comes around.

NY Senator Addabbo: “Marriage Equality Transcends Just The Issue Of Equal Rights.”
by DAVID BADASH on DECEMBER 4, 2009 · COMMENTS (5)
in CIVIL RIGHTS, LEGISLATION, MARRIAGE, NEWS, POLITICS
Step right up folks! View the circus that is the New York State Senate! New York’s Senator from Queens, Joe Addabbo, who has repeatedly said he is on the fence on marriage equality, and who reportedly took a good deal of money and support from the LGBT community, and who Wednesday voted against the same sex marriage bill in Albany, said today, “marriage equality transcends just the issue of equal rights.”
Via the New York Daily News:
“To this day, I have kept my personal belief out of it, and it’s still personal,” he told reporters following a City Hall press conference at which he and Sens. Liz Krueger and Bill Perkins unveiled proposals to end runoff elections.
“It’s a personal belief. It is my belief, and it’s only my belief,” Addabbo continued. “I voted, again, the will of the people in my district.”
“First and foremost, I am very thankful to everyone who got me to where I am as a state senator. I am grateful to all those in the gay community that supported me – whether it be financially or with the hours of volunteer work. I’m grateful to them, but never once did I say to anyone or any particular entity what my position was on the issue.”
“So, I would only have been truly a disappointment if I said I was going to
Over 5.6 Million Reads Adam Gonzalez at December 17, 2009 No comments: Links to this post

Pastor Rick Warren, distancing himself from any association with the Uganda "kill the gays" bill, released a video message to pastors in Uganda urging them to treat all with respect.
Says Warren: "The potential law before your parliament is unjust, it's extreme, and it's un-Christian towards homosexuals."
Late last month, Warren was asked about the proposed law on Meet the Press and refused to condemn it, saying that he "doesn't take sides." Interesting to see, now that pressure has built around the issue, that Warren is doing everything he can to disassociate himself.
Warren's work in Africa, his ties to anti-gay Anglican religious figures, and his tacit endorsement of condom-burning and anti-gay 'witch hunts' in Uganda, have been well-documented in a thorough article by Max Blumenthal at The Daily Beast,
Watch, AFTER THE JUMP...
POSTED 1:24 PM EST BY ANDY TOWLE IN NEWS, RICK WARREN, THE FAMILY, UGANDA | PERMALINK
SHARE ON FACEBOOK • EMAIL THIS • SUBSCRIBE TO THIS FEED • SAVE TO DEL.ICIO.US • DIGG THIS! • PROMOTE THIS WITH WIKIO • STUMBLE IT! • SUBMIT TO REDDIT • TWIT THIS!
Like it?
Subscribe to FREE Towleroad daily headlines with our RSS feed!
.
Over 5.6 Million Reads Adam Gonzalez at December 10, 2009 No comments: Links to this post

A thought about equal rights

moment a mere numerical superiority by either states or voters in this country proceeds to ignore the needs and desires of the minority, and for their own selfish purpose or advancement, hamper or oppress that minority, or debar them in any way from equal privileges and equal rights -- that moment will mark the failure of our constitutional system."

- Franklin D. Roosevelt
Over 5.6 Million Reads Adam Gonzalez at December 03, 2009 No comments: Links to this post