By Kevin O'Toole
Page from News10.com
Located at the western edge of Greenwich Village in Hudson River Park, the monument honors the LGBT community, those lost in the Orlando Pulse nightclub shooting in June 2016, and “victims of hate, intolerance, and violence.”
Governor Cuomo established the LGBT Memorial Commission in 2016 with the mission to design and build the new memorial. The 10-member commission issued a request for proposals, and weighed the submissions based on a number of criteria including, creativity, originality, quality of artistic composition, and constructability.

The commission named Anthony Goicolea as the artist for the monument.
“This monument will serve as a communal space filled with light, color, and hope where the visitors can sit, mourn, love, and remember for years to come,” said Goicolea.
The governor’s office described the monument:

The site specific design works in harmony with the existing attributes of Hudson River Park and promotes thought and reflection while encouraging people to unite in a communal environment.  It will feature nine modified boulders, some of which are bisected with a clear, laminated, borosilicate-glass with refractory components that act as a prism to create subtle rainbow patterns on the surrounding lawn and nearby objects.

Governor Cuomo says the monument will serve as an enduring symbol of the role New Yorkers play in building a fairer, more just world.
“From Stonewall to marriage equality, New York has always been a beacon for justice and we will never waiver in our commitment to the LGBT community and to creating a more just and inclusive society,” said Governor Cuomo. “This new monument will stand up for those values for generations to come.”
Over 5Million Reads Adam Gonzalez at June 26, 2017 No comments: Links to this post 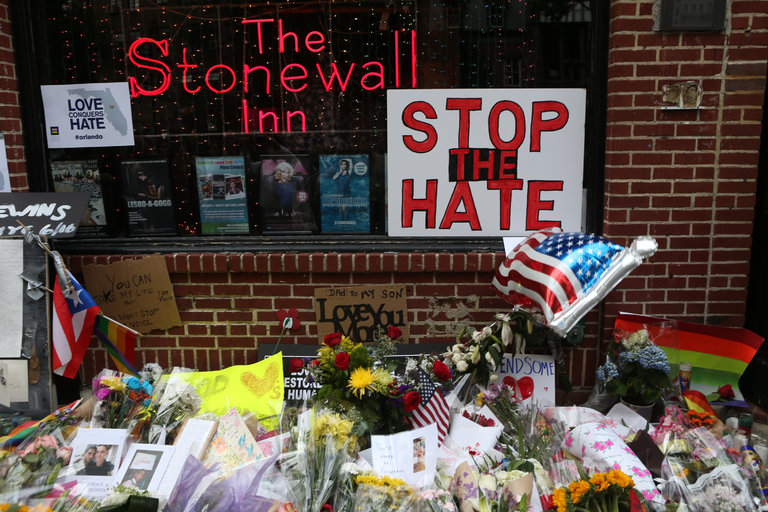 The little park outside the Stonewall Inn in Manhattan, the site of a major turning point in the gay rights movement nearly 50 years ago, became a permanent beacon last year when it was named a national historic monument.
But those who remember the night Stonewall patrons defiantly clashed with the police have dwindled over the years. Their stories risk going untold.
On Sunday, Senator Chuck Schumer of New York will announce a $1 million grant from Google.org, the internet giant’s philanthropic wing, to The Lesbian, Gay, Bisexual & Transgender Community Center, to start a project preserving the oral histories and human experiences of the people who stood up and fought back during those tense days in 1969. The initiative is in conjunction with the National Park Foundation, which will create an educational curriculum for students and a digital platform intended to magnify the reach of the monument beyond the small triangle of parkland in the West Village.
“The purpose is to spread the word about the Stonewall uprising and the progress we have made as well as the distance we have to go,” Mr. Schumer said. “And it sends a great message to Washington, especially in these times: We celebrate our diversity and cherish it, we don’t shrink from it and we don’t fear it.”
On the night of June 28, 1969, Martin Boyce was at the Stonewall Inn on the gay haven of Christopher Street. Mr. Boyce and other patrons fought back when police arrived for one of their near-nightly stops at the bar, lining up customers and arresting several for what seemed like arbitrary reasons. “The only place we had to go was Christopher Street,” said Mr. Boyce, now 69 and a chef living in the Yorkville neighborhood of Manhattan.
“Christopher Street was the one place you didn’t have to look behind you, it was all your people. Here was the one spot we had — now raided and ruined.” When the police told a group to disperse, he remembers, that night they advanced instead. “People who didn’t even want to do this, they just wanted to be free,” he said. The idea for the project came from William Floyd, Google’s head of external affairs for New York, who lives with his husband in Chelsea and walks past the Stonewall Inn when he takes his young son to school. Unlike some other national monuments, Stonewall commemorates a struggle that continues to evolve, he said.
“This is living, breathing, active thing,” he said. “It’s not like Mount Rushmore or a physical natural thing of beauty, it’s civil rights. We thought it was really important that we could provide money and technology to capture those voices and help amplify them.”
One of the voices will probably be Thomas Lanigan-Schmidt. As a teenager in the ’60s, he had run away from home in Linden, N.J. Stonewall was a refuge, he said, explaining how he ended up as one of the self-described “street kids” who joined the fray on Christopher Street that night.
“It happened spontaneously, and it happened mostly because of the civil rights movement in the ’60s that broke ground before it, and the women’s movement,” said Mr. Lanigan-Schmidt, now 69 and an artist. “They created a mentality that’s about freedom and being a full person. When we were in the street that night, that exchange of ideas had built up to that point. Everyone became a fighter pretty quick.”
The Stonewall project will join a group of similar initiatives by Google to preserve oral history. In conjunction with the Equal Justice Initiative, a group working to end mass incarceration, Google has funded a project that documents stories of lynching through the descendants of those who were murdered.
Though the $1 million donation is significant, the West Village’s gay center still needs to raise money to pay for components of a monument like an informational kiosk in the park. The center’s goal is $2 million. Mr. Floyd said Google’s donation would cover things like the oral history component, a social media platform for visitors to share their stories, and educational aspects, which Google is best suited to support.
“My hope is that we transform the scale and the reach of the Stonewall National Monument from a physical location to really a shared experience,” said Glennda Testone, the executive director of the Lesbian, Gay, Bisexual & Transgender Community Center. “What we want to do is make sure that that inspiration and that touchstone is available to everybody, wherever they may live in the world.”
By SARAH MASLIN NIR
New York Times
Over 5Million Reads Adam Gonzalez at June 18, 2017 No comments: Links to this post