Hazing in The Military Units Is Got To Stop! or is just Maybe/ 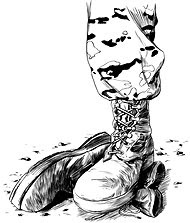 LAST fall, at an outpost in Kandahar, Afghanistan, Danny Chen, a 19-year-old Army private, was singled out for hazing by Sgt. Adam Holcomb and five other soldiers, all of whom were senior in rank to their victim. They believed Danny was a weak soldier, someone who fell asleep on guard duty, who forgot his helmet. So for six weeks, they dispensed “corrective training” that violated Army policy. When he failed to turn off the water pump in the shower, he was dragged across a gravel yard on his back until it bled. They threw rocks at him to simulate artillery. They called him “dragon lady,” “gook” and “chink.”
Finally, Danny could take it no longer. He put the barrel of his rifle to his chin and pulled the trigger. The pain was over.
Earlier this week, a jury of military personnel found Sergeant Holcomb guilty of one count of assault and two counts of maltreatment, for which he was sentenced to one month in jail — far less than the 17 years that he could have received.
When I read about this outrageous token sentence, I had a flashback. On April 3, 2011, my nephew, 21-year-old Lance Cpl. Harry Lew, was serving his second year in the Marines in Afghanistan’s Helmand Province, when he was hazed for over three hours by two of his fellow soldiers because he, too, fell asleep on duty. At the urging of their sergeant, who told them that “peers should correct peers,” they punched and kicked him. They poured the contents of a full sandbag onto his face, causing him to choke and cough as it filled his nose and mouth. Twenty-two minutes after the hazing stopped, he, too, used his own gun to commit suicide, in a foxhole he had been forced to dig.
His parents and I waited patiently for justice to be served and watched in horror and disbelief as his perpetrators’ behavior was dismissed, with one lance corporal receiving just a month in jail, and the other two Marines found not guilty.
In both cases, military defense attorneys claimed that the perpetrators of hazing had suffered enough.
Our young people make a great sacrifice when they go off to war. They are in mentally tough, physically dangerous situations all the time. We must take every mistake that puts the lives of our soldiers at risk seriously, whether it is falling asleep on guard duty or something else. “Corrective training” is designed to do that. The Army recommends that senior officers create a plan with a soldier who needs improvement, supervise the training and set timelines and targets. But using corrective training as punishment is supposed to be strictly prohibited.
In these two cases, other alternatives were not even explored; abuse was the only “corrective training” offered. Danny was prevented from visiting a nearby base where more senior officers, a chaplain or an equal opportunity officer could have helped him escape his torment. Harry could have been transferred to another unit or out of the military if he failed to meet the standards. Instead, his peers decided to beat him into shape.
Is it necessary for soldiers to be abused and tortured by their fellow troops in order for the military to be strong? In Congressional hearings, the military tells me no.
But are soldiers taught the difference between “corrective training” and abuse? Apparently not.
Is there real punishment when they’ve crossed that line? Apparently not.
Since my nephew Harry’s death, I have found more cases of soldiers who have been victims of hazing, who then took their own lives. Veterans and active servicemen and servicewomen have contacted me about the harassment they suffered in the military. Many of them had never come forward before. They felt helpless, with nowhere to turn and no one to trust.
Hazing has no place in our military. It threatens unit cohesion, undermines our military readiness and deeply scars the volunteers who are forced to endure it.
In public statements, the military’s top brass agrees. But their actions don’t reflect that. Some services don’t have a policy expressly prohibiting hazing. Others don’t offer anti-hazing training. And since the Department of Defense doesn’t track the number of hazing incidents, there’s no way to know how widespread the problem is.
That’s why I introduced the Harry Lew Military Hazing Accountability and Prevention Act, which asks the military to make hazing a crime, requires the Defense Department to come up with a comprehensive anti-hazing plan, and creates a tracking system for hazing incidents. These provisions passed the House in May as part of the National Defense Authorization Act, but the Senate still needs to act. And the sooner it acts, the better, because we know this is just the beginning of what we need to do to eradicate hazing.
Our military doesn’t have to abuse its own to be strong. We want to have the most capable and most advanced armed forces in the world. But as long as the military allows the young people we send to war to be hazed by their fellow soldiers without consequence, we won’t. The military must make it clear that hazing is absolutely unacceptable and that perpetrators will be severely punished. We must protect those who protect us.

Over 5Million Reads Adam Gonzalez at August 04, 2012 No comments: Links to this post