Muslims to ISIS about to kill the Christians: "Kill us All” 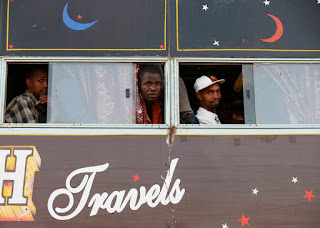 Their M.O. is a tried and terrifying one: Launch a raid, single out Christians, and then spray them with bullets.

But when Al-Shabaab militants ambushed a bus Monday, things didn't go according to plan.

A group of Kenyan Muslims shielded the Christian passengers and told the attackers they were prepared to die together.

The Muslim passengers, who were mostly women, told the Islamic militants to kill them all or leave them alone, witnesses said.

Police escort breaks down
The bus was headed to the city of Mandera, near the border with Somalia and Ethiopia.

The journey is such a security risk that most buses travel with a police escort.

In this case, however, the police car broke down and the bus continued on its journey, Joseph Nkaissery, Kenya's interior cabinet secretary, said. 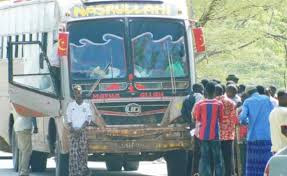 Al-Shabaab, a Somali group the United States has designated as a foreign terrorist organization, wants to turn Somalia into a fundamentalist Islamic state. It has launched a series of attacks in Kenya, since Kenyan forces went into Somalia to battle the extremists in 2011.

Its goal: sow division in the border regions of Kenya and Somalia, where many of the people are ethnically Somali, analysts say.

Among Al-Shabaab's most brutal acts was the raid on Garissa University College in April that left nearly 150 people dead. Witnesses described how gunmen asked students to recite verses from the Quran. If they couldn't, they were killed.
The group regularly storms buses, particularly this time of the year -- one of the busiest travel seasons in the nation. Throngs make their way to relatives' homes for the holidays, with buses and other public transportation packed.

In one such attack last year, they raided a bus and shot dead 28 people who failed to recite Quran verses.

'We are not separated by religion'
In the Monday attack, the gunmen ordered Muslim passengers to come out of the bus and separate themselves from the Christians.

There were more than 100 passengers on board.

They gave the Christian women their hijabs and helped others hide behind bags in the bus, passenger Abdiqafar Teno told CNN.

"They told them, 'If you want to kill us, then kill us. There are no Christians here," he said.

A Christian man who tried to run away was captured and shot dead, Teno said. The driver of a truck, which was trailing the bus, was also killed.
The gunmen left, but warned they would return.

Nkaissery, the interior cabinet secretary, told reporters security forces were in "hot pursuit of the criminals."

Then he commended the actions of the Muslim passengers.

Opinion: ISIS perversion of Islam is a mortal danger to Muslims

"We are all Kenyans, we are not separated by religion," he said. "We are one people as a nation. And this is a very good message from my brothers and sisters from the Muslim community.”
(CNN)

CNN's David McKenzie and Briana Duggan contributed to this report.

Over 5.6 Million Reads Adam Gonzalez at December 24, 2015 No comments: Links to this post