The 27-year-old becomes the first professional male ice hockey player to come out as gay in Denmark and joins Lars Peter Karlsson of Sweden and Brendan Burke of Canada as the third openly gay professional ice hockey player in the world, per TV 2.
“There’s a risk that some people might shout and heckle me while I’m playing matches. It’s something I have to be ready for and be mature about. But I feel that I’m ready to show that you can be gay and play ice hockey,” said Lee-Olsen. “It took longer than I expected, but now I’m ready to stand up for myself and others.” Note: He spoke in Danish, which we translated to English for Outsports readers.
While the NHL has been doing more in recent years to show support of its fans in the LGBTQ community, there’s never been an out man in the NHL. Still, Danish NHL player Lars Eller of the Washington Capitals has shown full support on Lee-Olsen’s coming out, hoping that his actions will inspire others in their sport to come out too. “It’s special. You might say that about any sport, but ice hockey has a very macho culture, so I think it must not have been an easy decision for him. It’s very brave.”
Unlike women’s pro hockey which is home to a number of out players and wide LGBTQ acceptance within the NWHL, Lee-Olsen’s coming out represents a meaningful shift for men’s hockey and inspiring courage in gay boys and men aspiring to be in the NHL one day.
You can watch the full interview (in Danish) with Lee-Olsen on TV 2 PLAY.
Over 5.6 Million Reads Adam Gonzalez at October 08, 2019 No comments:

Email ThisBlogThis!Share to TwitterShare to FacebookShare to Pinterest
Labels: Comes Out, Denmark, Gay in Sports

Feathers were flying at one Danish zoo this week.
A same-sex penguin couple “kidnapped” a chick from another pair of birds within their home at Denmark’s Odense zoo this week.
The parenting scuffle went down while the baby penguin in question’s parents went for a swim in the creatures’ exhibit, Odense zookeeper Sandie Hedgegård Munck told Danish broadcaster DR.
According to Hedgegård Munck, the penguin pair decided the chick’s parents weren’t fit to look after the baby — and waited for the perfect moment to take action.
“The parents disappeared, and the kid was simply kidnapped,” the zookeeper told the outlet.

Gay penguin couple at Denmark's Odense Zoo
Facebook
Hedgegård Munck places all blame for the animal miscommunication on the chick’s father. “I know that the female is very caring for the kid, and she is also very aggressive to us animal lovers if we get too close to the chick,” Hedgegård Munck explained. “I think the female had been out to get her bath, and then it had been the male’s turn to care for the kid. He may have then left, and then the [gay] couple had thought, ‘It’s pity, we’ll take it.'”
One day later, the chick’s biological parents wanted their baby back. In a video posted on the Odense Zoo’s Facebook page, the parents can be seen confronting the baby’s new adoptive family, who protectively nuzzled the chick in between their legs.
RELATED VIDEO: Adorable Penguin Gets A Wetsuit To Keep Warm

YOU MIGHT LIKE
MARY ELIZABETH WINSTEAD IS ‘EXCITED TO LEARN HOW TO USE A BOW AND ARROW’ FOR ‘BIRDS OF PREY’
BILL COSBY GETS 3 TO 10 YEARS IN PRISON FOR SEX ASSAULT: 'THE DAY HAS COME. THE TIME HAS COME'
After their encounter turned physical, the chick was given back to his biological parents.
Nonetheless, the couple was rewarded for their paternal skills: They were given an egg from a female penguin that was unable to care for her child.
The happy pair aren’t the first same-sex penguin couple to want to start a family.
In 2004, the New York Times published a story about two chinstrap penguins who fell in love at the Central Park Zoo in Manhattan.
The penguins, called Roy and Silo, “exhibit what in penguin parlance is called ‘ecstatic behavior’: that is, they entwine their necks, they vocalize to each other, they have sex,” the New York Times wrote at the time.
Like the Danish couple, Roy and Silo were desperate to have a baby, so they put a rock in their nest and sat on it.
Chief keeper Rob Gramzay noticed this and gave them a real egg that needed parents. Gramzay explained that Roy and Silo eventually welcomed baby Tango, who they cared for until she was old enough to be on her own.
Roy and Silo remained together for six years, but later split up. However, their story was even turned into the book And Tango Makes Three by Peter Parnell and Justin Richardson.
Over 5.6 Million Reads Adam Gonzalez at September 29, 2018 No comments: 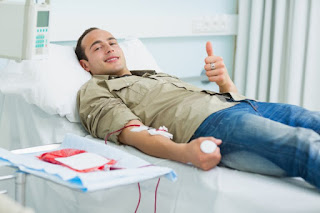 However, if the man is single they must have been celibate for four months prior to donating.

Denmark has announced that is lifting the ban on gay men donating blood. Men who are single still face some obstacles however, as they must have been celibate for four months before doing so. However, men who are in relationships will be allowed to donate regardless of when they last had sex.
Speaking to the CPH Online, Danish Health Minister Ellen Trane Nørby said: “The authority [patient safety] has found a model we feel is safe and we will therefore incorporate it into Denmark.
“All safety mechanisms in our blood donation system are built on trust and we have some very advanced tests that screen the blood.”
CPH Online reported that it was strange that the ban hadn’t been lifted beforehand, as there has been political support for the idea for many years. A date for the ban to be lifted has not yet been announced, but it is expected to take place at some point in 2019.
Bans on gay and bisexual men donating blood are slowly being removed. Earlier this year, Israel announced that it would allow gay and bisexual men to donate blood.
However, the process would still be more difficult than it would be for a straight man. Patients will have their blood checked for infectious diseases, and will have to wait four months while their plasma is separated and frozen.
Donors will then have to donate a second time, and if the results for HIV – and other diseases – comes back as negative, then their blood will be authorised for use.
And last year, the UK government announced that it was removing the 12-month ban on celibacy and replacing it with a three-month ban.
“We’re pleased the Government recognises there is still more to be done to ensure all lesbian, gay, bi and trans people are accepted without exception,” said Stonewall’s CEO Ruth Hunt.
“Change to the blood donation rules are welcome. However, while this is an important move, it’s vital that this is a stepping stone to a system that doesn’t automatically exclude most gay and bi men.
“We would like to see individualised risk assessment, and are encouraged that the Government and NHS Blood and Transplant Service are committed to exploring how to do this.”
Gay Times UK
Over 5.6 Million Reads Adam Gonzalez at August 27, 2018 No comments:

Denmark Takes a Lead in Fighting Homophobia in Football 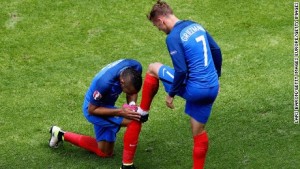 Danish football clubs, players and the authorities are to launch a series of initiatives aimed at combating homophobia in the game, they said in a joint statement on Friday.

The Danish Football Association (DBU), the Players Association and the Danish League are teaming up for a nationwide campaign to fight against anti-gay chanting and to improve behaviour in the dressing-room, on the pitch and on the terraces. “Tolerance has always been a core value in football – as we have seen in the campaigns against racism.

We are very pleased that we together can campaign against homophobia,” Danish League CEO Claus Thomsen said. Openly gay male players in Europe’s top divisions are very rare, with former Aston Villa and VfB Stuttgart midfielder Thomas Hitzelsperger one of just a handful a players to come out in public. “I do not understand how we can have a stadium of 25,000 people screaming homophobic or sexist slurs, and everyone just shakes their head,” FC Copenhagen defender Mathias Joergensen told Reuters.

As well as Danish clubs taking part in Pride parades in Copenhagen and Aarhus this weekend, captains of top-flight sides will wear rainbow-coloured armbands and rainbow flags will be carried as the teams walk out onto the field. There will also be a major event around Denmark’s friendly against Germany on June 6, although no details have yet been announced.

(Reporting by Philip O’Connor in Stockholm, editing by Neil Robinson)
Over 5.6 Million Reads Adam Gonzalez at April 22, 2017 No comments: