Why Are There No Marijuana Ads? Schumer Introduces Bill on The Senate

The marijuana industry is booming, but it's hard for pot growers and sellers to advertise and promote their products.
Why it matters: Most media industries don’t accept weed ads, or have rules that make it nearly impossible to place them. These challenges, combined with the changing politics around pot, are hindering marijuana marketers.
Social media companies typically don’t allow marijuana groups to purchase ads. Both Facebook and Twitter prohibit the promotion of drugs and drug paraphernalia globally.
There are some digital advertising networks, like Mantis, which is aimed at people with interests like cannabis, yoga, and wellness. But even those networks are limited by the publishers that accept their ads.
And getting ads accepted on radio and television can be a nightmare. "Most TV companies will only let you advertise if you can prove that the TV station or radio station has less than 30% of listeners that are under 21 years of age," says Celeste Miranda, co-founder of The Cannabis Story Lab.
The great exception seems to be billboards and out of home advertising.
Because paid media is so difficult, most marketers rely heavily on P.R. Many marijuana marketers are focusing on education campaigns — especially with doctors, educating them about the benefits of medical marijuana for the treatment of cancer and terminal illness.
In cannabis, it's an education-first mindset, not product first.
— Matt Rizzetta, CEO of the public relations agency N6A
What's next: Politicians are slowly warming up to the idea of marijuana becoming more mainstream, with the most notable exception being Attorney General Jeff Sessions, who has vowed to crack down on marijuana legalization.
Voters will also have the opportunity to weigh in this election cycle, with a handful of states considering their own versions of marijuana legalization this year.

Politics isn't always red or blue. Lately, it's all about green. 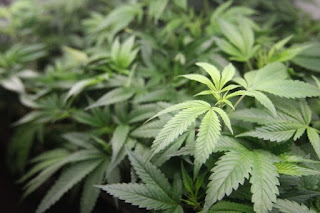 Schumer's legislation would remove marijuana from the list of scheduled substances under a 1970 law that classifies marijuana as dangerous as heroin for legal and regulatory purposes. It would establish funding for women- and minority-owned marijuana businesses, require more research on the drug's public health impact, and maintain federal authority to regulate commercial advertising, similar to existing regulations for tobacco and alcohol.

Schumer's support is the latest indicator of the green wave affecting American politics, with growing support across the political spectrum to change the way the federal government sees marijuana.

Former House Speaker John Boehner, R-Ohio, made headlines last week after he announced he was joining the board of a marijuana company and would now help advocate for legalization policies, swiftly reversing a lifetime of opposition to the drug.

The reversals are fueled by a growing number of states that are successfully experimenting with changing marijuana laws — and enjoying the revenue they are bringing in to help their cash-strapped states. Colorado voted to legalize the drug for recreational use in 2012, and there is essentially no lingering political dispute anymore about its merits from politicians in either party there.

Gardner is also drafting bipartisan legislation that would make clear that states have the right to determine their own marijuana laws without federal interference.

The trio of Senate Democrats are all possible 2020 presidential contenders — another indicator of which way politicians see the country moving when it comes to marijuana policy.

Marijuana is also making health care advances this week. The Associated Press reported that a group of U.S. health experts on Thursday endorsed the use of a medicine made from the marijuana plant to treat seizures in children. If the Food and Drug Administration follows the group's recommendation, it would become the first drug derived from the cannabis plant to win federal approval in the country.

The culture shift is also changing the way people celebrate 4/20, the unofficial holiday celebrating marijuana use and culture. Revelers are trading in secret parties and furtive passes for public celebrations. USA Today reports Denver is anticipating tens of thousands of people to gather Friday for what is considered "the world's largest 420 celebration."

Eventually all the stories will be for subscribers. It's free and no spam, but it will be more secured for you and us in this complicated world. any questions just ask on the comment section ofthis story.🦊
Over 5.6 Million Reads Adam Gonzalez at April 21, 2018 No comments: Links to this post