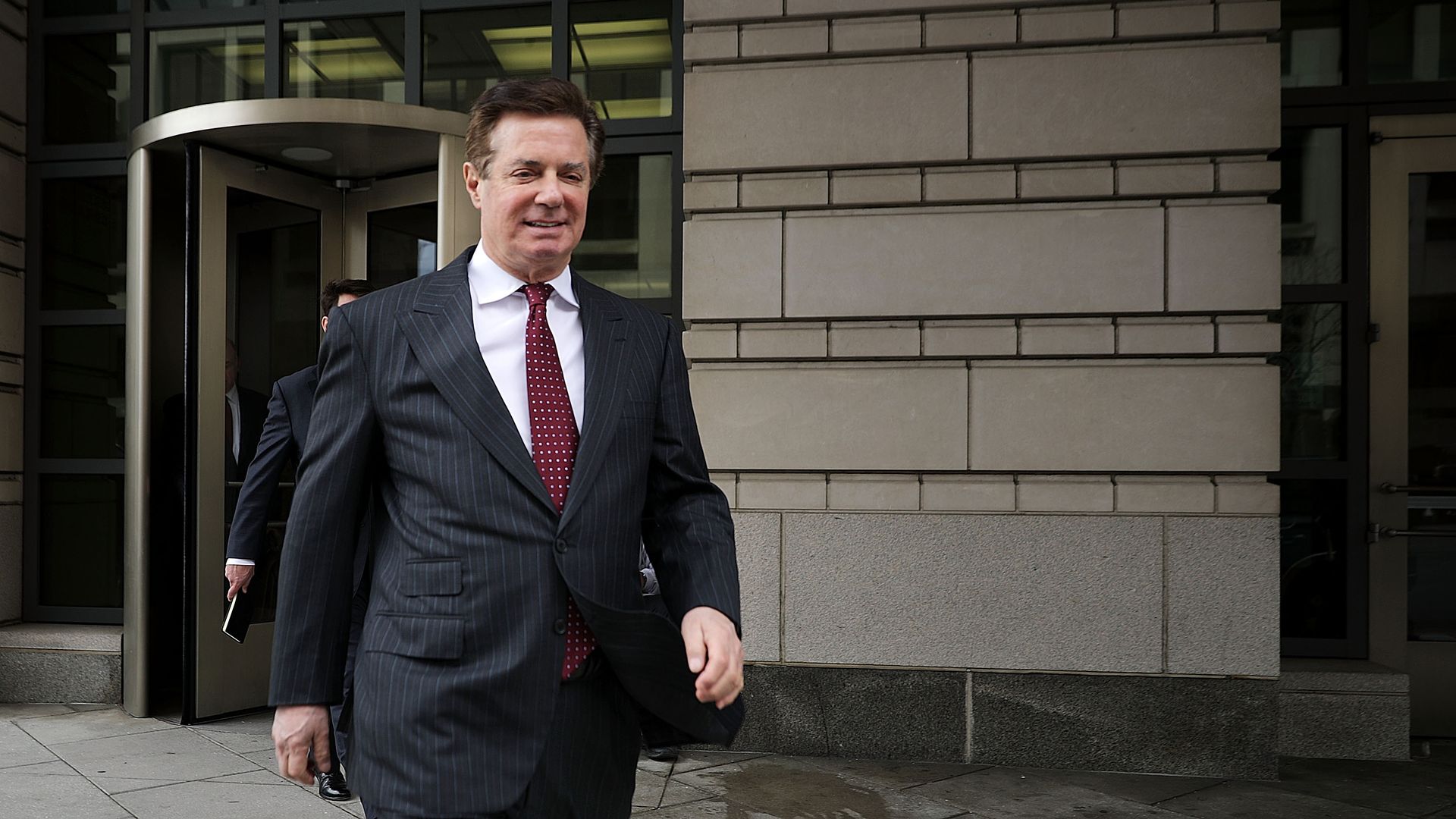 Former Trump campaign manager Paul Manafort was found guilty on 8 criminal counts Tuesday, including bank fraud, tax fraud and hiding a foreign bank account. Judge T.S. Ellis declared a mistrial on the other 10 charges.
The big picture: While this is the first case brought to court as a result of special counsel Robert Mueller's investigation into potential Russian interference in the 2016 election, the federal tax and bank fraud charges are not related to Manafort's work with the Trump campaign — they're instead focused on his activities as a lobbyist for Ukraine.

The details: Manafort was found guilty on five counts of false tax returns, one count of a failure to register a foreign bank account, and two counts of bank fraud. All together, Manafort faces up to 80 years in prison.
Manafort's lawyer appeared before cameras following the verdict saying:
"Mr. Manafort is disappointed for not getting acquittals all the way through or a complete hung jury on all counts. However, he would like to thank Judge Ellis for granting him a fair trial, [and thank the] jury for their very long and hard fought deliberations. He is evaluating all options at this point."
What’s next: Manafort will face a second criminal trial next month in Washington, D.C. on seven other charges brought by Mueller, including failure to register as a foreign agent, obstruction of justice and money laundering.
President Trump reacted to the guilty verdict, saying "this has nothing to do" with Russian collusion and that he feels "very badly" for Manafort. 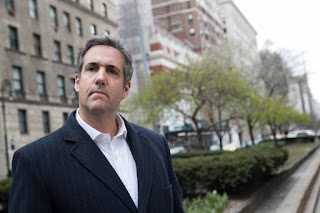 President Trump's former longtime attorney Michael Cohen pleaded guilty Tuesday to eight counts related to tax fraud, making false statements to a financial institution, excessive campaign contributions, and unlawful corporate contributions in a U.S. District Court in Manhattan.
During his guilty plea, Cohen said he was directed to violate campaign law at the direction of an unnamed candidate. He added that the same candidate directed him to pay $130,000 in hush money, which the candidate later reimbursed. Cohen told the court that he knew what he was doing was illegal.

One key detail, per the New York Times: "The plea agreement does not call for Mr. Cohen to cooperate with federal prosecutors in Manhattan, but it does not preclude him from providing information to the special counsel, Robert S. Mueller III, who is examining the Trump campaign’s possible involvement in Russia’s interference in the 2016 campaign."
Timing: News of Cohen's plea deal comes as former Trump campaign chairman Paul Manafort was found guilty on eight criminal counts by in Virginia.
These two posting were by AXIOS
Over 5.6 Million Reads Adam Gonzalez at August 22, 2018 No comments:

A white supremacist who plotted a machete attack on people at a gay pride event has been convicted of a terror offense.
Ethan Stables, 20, planned to strike at the LGBT event at the New Empire pub in Barrow, Cumbria, in June 2017.
He claimed he posted comments on Facebook to impress far-right friends and was "ashamed" as he was bisexual.
Stables was found guilty of preparing an act of terrorism, threats to kill and possessing explosives.
Leeds Crown Court heard he was planning to use an ax and machete during the attack, but the plan was foiled after he told people about it on Facebook.
Bisexual terrorist who hated himself
Officers received a tip-off from a member of a far-right group, where he posted a message saying he was "going to war" and planned to "slaughter".
Armed police swooped on him as he walked towards the pub just before the event. 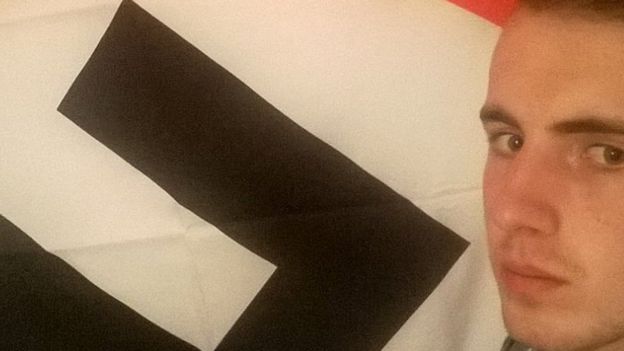 The court was told Stables made a series of chilling Google searches including "I want to go on a killing spree", "how to make chemical poison" and "what is prison like for a murderer".
He had also searched for how to make a bomb from matches, and police found a collection of cut-off match heads in his flat.
At other times he expressed his hatred of Muslims and Jews and said in a WhatsApp message: "My country is being raped.
"I might just become a skinhead and kill people."

The right-wing extremist had a swastika hanging on his bedroom wall and bought a new Nazi armband after he was taken by the police when he was arrested. 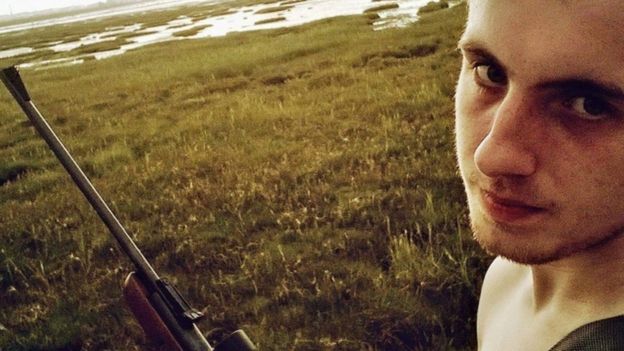 Jurors heard Stables was interested in the Columbine High School massacre and had been expelled from school following an incident in which he put another pupil in a headlock.


He became radicalized after a trip to Germany to see a young woman, his mother said.
Stables claimed he was just a fantasist and had been "brainwashed" by right-wing extremists he met when he lived in hostels.
He was described by his barrister as "lonely and inadequate" and as having an autism spectrum condition.
Stables was remanded in custody ahead of sentencing later this week.
BBC