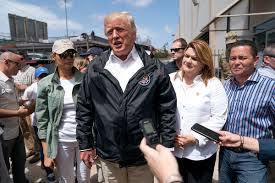 Washington — Although the Federal Emergency Management Agency denied Puerto Rico's request to dispatch forensic units to Puerto Rico to help process a mounting backlog of bodies, the island's government has received a much-need reprieve. The fiscal board which controls spending in the U.S. territory will allow Gov. Ricardo Rosselló to use $1.5 million in funding to curtail the backlog in the island's morgue.

The current backlog of bodies at the Forensic Sciences Institute, which is the island's version of a medical examiner in the mainland, is part of a systemic issue that has been plaguing the U.S. territory for years because of mismanagement, underfunding and understaffing. The death toll and chaos of hurricanes Maria and Irma exacerbated the situation, which has forced many families to wait weeks before receiving the bodies of their loved ones.

Rosselló told CBS News the seven-member fiscal oversight board — created by the 2016 Puerto Rico Oversight, Management, and Economic Stability Act, known as PROMESA — accepted the $1.5 million disbursements to fund the human resources department of the morgue in San Juan. Rosselló said the morgue could only have one pathologist on duty to process bodies from the entire island on some occasions.

"The Board considered the Forensics Institute's requests for budgetary assistance a top priority, and has worked for months with the Institute and other government officials to identify the appropriate offsets in spending to allocate the requested resources," a spokesperson for the board wrote in a statement to CBS News. "We are with the people of Puerto Rico and we will continue to work with the Institute to support this essential function of government."

In the letter, signed by FEMA official Michael Byrne, the agency noted that a DMORT deployment in the summer of 2018 had helped Puerto Rico's morgue reduce a backlog of 240 bodies by performing 188 autopsies. Byrne said FEMA's team conducted an assessment of the backlog in the island's morgue and provided the Puerto Rican government a list of recommendations to address "underlying issues"— including an insufficient number forensic pathologists, a lack of adequate equipment and the need to implement "new processes."

But the FEMA official said these issues could be not be "attributed" to the natural disasters that struck the island, which triggered the first DMORT deployment.
"These and the other courses of action ... address systemic problems resulting from issues and shortcomings that pre-date the disasters and/or cannot be attributed to the effects of the disasters," Byrne said, presumably referring to hurricanes María and Irma.
First published on February 28, 2019 / 10:12 AM

Not that Trump would care for someelse's pain but still we have to point it out and not let his lies take over the communications waves.

Puerto Rico's governor responded to President Trump's claim that nearly 3,000 people "did not die in the two hurricanes" that hit the island last year, and he's urging people not to politicize the recovery process. "Neither the people of Puerto Rico nor the victims deserve their pain to be questioned," Gov. Ricardo Rosselló told CBS News.
Mr. Trump took to Twitter Thursday morning to dispute the official death toll in the wake of Hurricane Maria, writing: "When I left the Island, AFTER the storm had hit, they had anywhere from 6 to 18 deaths. As time went by it did not go up by much. Then, a long time later, they started to report really large numbers, like 3000 ..."

✔
3000 people did not die in the two hurricanes that hit Puerto Rico. When I left the Island, AFTER the storm had hit, they had anywhere from 6 to 18 deaths. As time went by it did not go up by much. Then, a long time later, they started to report really large numbers, like 3000...
In another tweet, Mr. Trump claimed the higher count was "done by the Democrats in order to make me look as bad as possible when I was successfully raising Billions of Dollars to help rebuild Puerto Rico."
In fact, the number of deaths comes from an independent analysis by researchers at George Washington University's Milken Institute School of Public Health, which was commissioned and accepted by the governor of Puerto Rico. It found around 2,975 more deaths than normal occurred in Puerto Rico from September 2017, when hurricanes Irma and Maria hit, to February 2018.
"We went through a rigorous scientific process, we externalized the investigation so that it was an independent investigation," Rosselló said.
The government initially reported just 64 deaths resulting from the hurricane. But that number only took into account deaths directly attributed to causes like flying debris, floods and drownings — not the increase in mortality from other causes related to the storm and conditions in its aftermath. Rosselló says it was always clear the smaller tally was incomplete.
"If you listen to all of our communications, mine in particular, every time we spoke about the death toll numbers in the early going after the storm, we always knew that that number was going to be much higher. We just needed to have a real, better mechanism for identifying," Rosselló said.
Mr. Trump's latest comments come just days after he said the federal response to Maria was "an incredible, unsung success."
Rosselló said Puerto Rico is still in recovery, and now isn't the time to politicize the storm.
"We are U.S. citizens. The federal government needs to do right by our U.S. citizens and so far as I've stated in the past, we've had good relationships, we've had good results in some parts and bad results on some parts. Now our job as leaders is not to fuss over it or to fight. Our job is to identify what is done well and keep on doing it and what was done wrong, mitigate it and do it better moving towards the future," Rosselló said.
The governor also said this points to a bigger problem that needs to be addressed.
"After the storm, it is evident that the treatment that was given say Florida or Texas was very different than the treatment given in Puerto Rico," he said. "We are second-class U.S. citizens, we live in a colonial territory, it is time to eliminate that and I implore all the elected officials, particularly now in midterm elections, to have a firm stance. You're either for colonial territories or against them. You're either for giving equal rights to the U.S. citizens that live in Puerto Rico or you're against it."
This all comes as the federal government prepares to deal with Hurricane Florence. The hurricane has prompted storm watches or warnings for more than 10 million people, as well as evacuations for coastal communities in North and South Carolina and Virginia. Florence is expected to push up to 13 feet of storm surge and dump as much as 40 inches of rain over seven days.
© 2018 CBS Interactive Inc
Over 5.6 Million Reads Adam Gonzalez at September 15, 2018 No comments: Links to this post