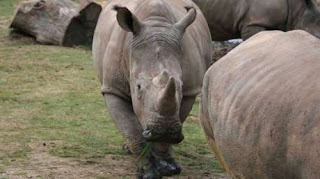 A rhino has been shot dead by poachers at a zoo in France in what is believed to be the first such incident in Europe.
Keepers found Vince, a four-year-old white rhino, in his enclosure at Thoiry Zoo on Tuesday morning.
One of his horns had been hacked off with a chainsaw, police said.
The African rhino's horn commands high prices on the black market, with about 100 killed every month in the wild.
However, this is thought to be the first time poachers have targeted a rhino living in a European zoo.
Vince was shot three times in the head after poachers forced their way into the zoo overnight. They then took the horn - a kilo of which could fetch as much as $60,000 (£49,300).
But the poachers appear to have been disturbed as his second - partially sawn - horn was left behind.
The zoo's two other white rhinos, 37-year-old Gracie and five-year-old Bruno, "escaped the massacre", the Thoiry Zoo revealed.
Bruno and Vince arrived at the zoo together in 2015. Vince, who was born in a zoo in the Netherlands, was one of 250 rhinos in European zoos who were part of a breeding programme.
The white rhino is a conservation success, having been brought from the edge of extinction in the late 19th Century to a population of about 20,000 animals.
However, poaching has risen over the past few years, as demand from markets like Vietnam - where rhino horn is thought to have aphrodisiac properties - increases.
France outlawed the trade in ivory and horns last year.
BBC
Over 5Million Reads Adam Gonzalez at March 07, 2017 No comments: Links to this post

I’M  Loooking at you pal!

STATEN ISLAND, N.Y. -- Over 80 years ago, some good folks embraced the vision of a state-of-the-art zoo on this borough's North Shore and -- amazingly -- made it happen here, within a few short years, in the middle of The Great Depression of the 1930s.
From the outset, the zoo named this as one of its goals: "To instill in children an understanding and appreciation of living creatures."
For generations of Staten Island families, that goal still resonates, as parents and grandparents trek their kids to the zoo where they, too, were introduced to the wonders of reptiles, fish and other living creatures in a setting both informative and inspiring. 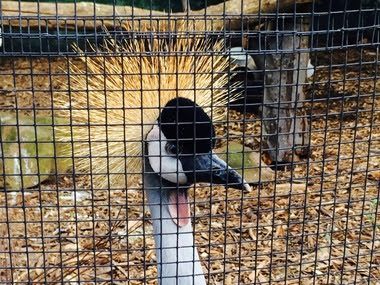 View full sizeAfrican Grey-Crowned Crane at the Staten Island Zoo, Oct. 26, 2014. (Staten Island Advance/Virginia N. Sherry)
Early Sunday afternoon, the kids were out in force at the zoo, some of them still in strollers and others romping about on their own, excited to see the endangered Amur leopards and African grey-crowned cranes, a pair of American bald eagles, screeching black-and-white ruffed lemurs and long-necked ostriches, the world's largest living species of bird.
"She loves the zoo," said Alison Lacle of Westerleigh, whose daughter Gabriella, 4, was in tow and admitted a soft spot for the leopards. "She's been coming here since she was able to walk."
Four brothers from Bayonne, N.J., accompanied by their grandmother, Terry, who did not want to provide last names, said they had been enjoying the zoo for three hours.
"The leopards were pretty cool," said Owen, 10, the oldest. "But I'm sorry that such an amazing animal like that is in danger of extinction."
His brother Ben, 8, said he enjoyed the otters. "They were very playful and really funny," he said.
Click here for eight historic facts about the Staten Island Zoo that you may not know

If you are alone and might need company at the Zoo. You might find me willing to to take around there. Adam*
Over 5Million Reads Adam Gonzalez at October 27, 2014 No comments: Links to this post