Acceptance Means More Than Love for the LGBT Millennial 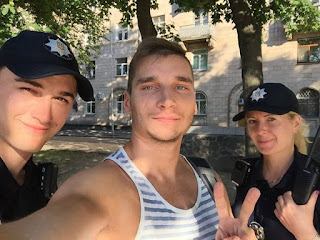 Millennials Undermining Themselves by Not Voting

Much has been made of the vaunted "youth vote" in the Obama era, of the surge in voters younger than 30 who've turned out -- many for the first time, all defying expectations -- in numbers crucial to influencing the last two presidential elections. But even during the 2012 election, younger voters in fact cast significantly fewer ballots than we might expect, given their share of the voting-eligible population.
During the last presidential election, voters aged 18-29 made up 21.2 percent of the population of voting-age citizens in the United States. But they made up just 15.4 percent of all people who actually voted. The gap between these two numbers has varied over the years, but the pattern has remained consistent for at least a generation: Younger voters are invariably underrepresented at the polls even in presidential election years.
This also means that older voters -- particularly those aged 45 and over -- are consistently overrepresented. The graph below, from a new Census analysis of data in the Current Population Survey Voting and Registration Supplements, captures this pattern over the last five presidential elections: 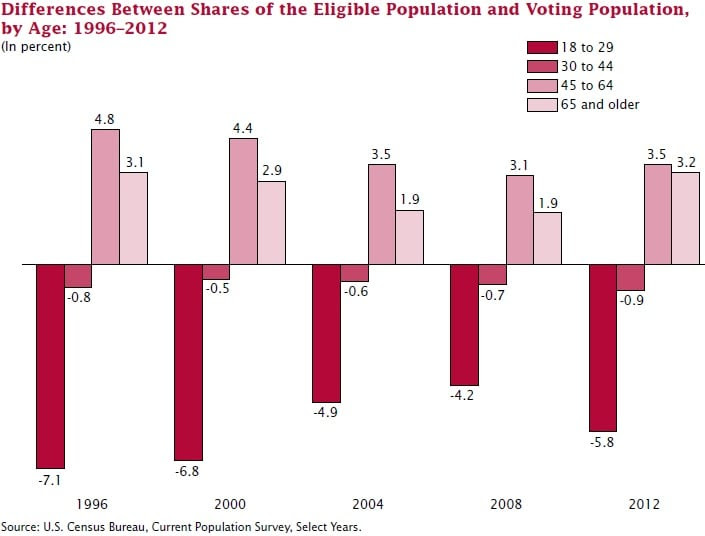 That graph shows, for instance, that in 2012 younger people voted at a rate that was 5.8 percentage points lower than their share of the voting-eligible population. That's a narrower gap than in 1996 and 2000. Voters 45 to 64, meanwhile, accounted in the last election for a share of the voting population that was 3.5 points higher than their share of the potential voting pool.
Why does this persistent pattern matter, beyond the implications in turnout models heading into the next general election? Younger and older Americans have divergent views on a number of public policy questions, from gay marriage to legalized marijuana to immigration. And, particularly on social issues -- where older voters tend to be more conservative -- policy could shift more slowly than public opinion data would suggest if the demographic driving attitude change in America doesn't turn out to vote at rates in line with its full potential influence.
Consider views on an issue in the news this week, affirmative action. This data comes from a 2010 Pew Research Center report on the "pro-government, socially liberal generation" of so-called millennials: 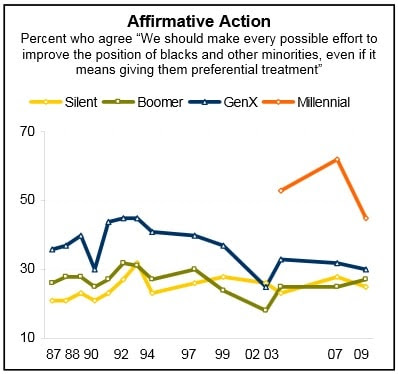 Pew Research Center
Here is a similarly gaping split in response to whether people agree with the statement "I have old-fashioned values about family and marriage": 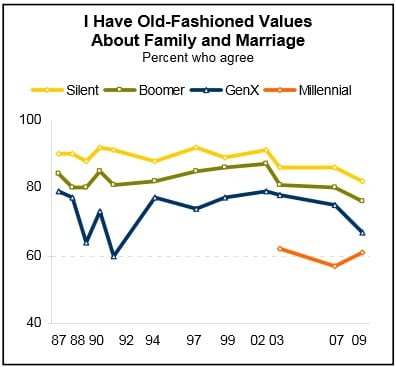 More specifically, this is the generational gap on gay marriage: 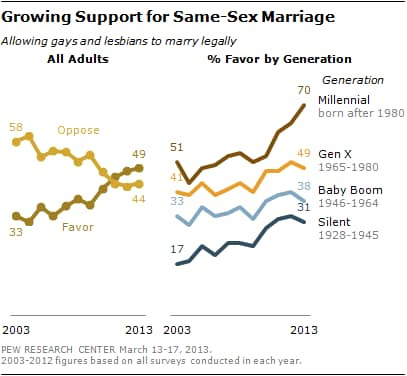 And on legalizing marijuana: 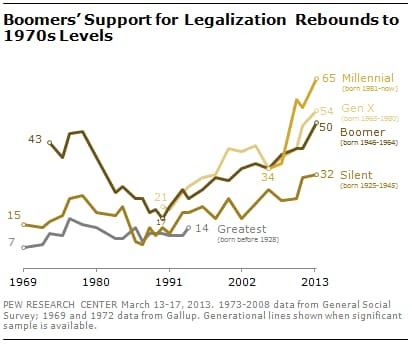 The gap is narrower but still notable on creating legal status for undocumented immigrants: 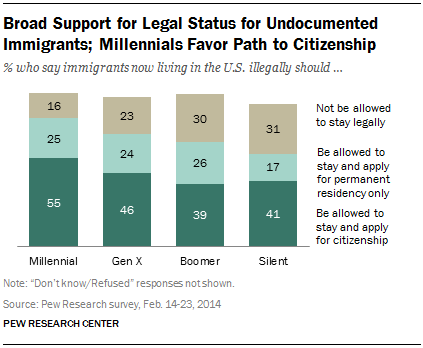 To the extent that younger would-be voters have very different views than their parents and grandparents on these questions, they’re currently not translating those views in the voting booth as loudly as they could.
Over 5Million Reads Adam Gonzalez at April 25, 2014 1 comment: Links to this post