Ecuador's highest court has ruled to recognize same-sex marriage, marking a watershed moment for LGBTQ rights in the Catholic-majority country.
Judges on Quito's constitutional court ruled five-to-four on Wednesday to overhaul the country's laws, arguing that its current marriage legislation was discriminatory and unconstitutional, and that same-sex couples should be allowed equal rights.
The four dissenting judges said that changes to the Ecuadorean constitution should be decided and approved by the government and not the court.
Ecuador's National Assembly will still be required to officially change the laws that define the institution of marriage. Constitutional lawyer Salim Zaidán told CNN, however, that Wednesday's verdict was binding and that same-sex couples would be able to marry as soon as the constitutional court notifies local government offices of their decision. The court has 10 days to do so.
The case was brought to the constitutional court by two same-sex couples who had petitioned for the right to marry.
On Wednesday, LGBTQ activists and supporters outside the courthouse hailed the celebration as a victory for a movement that has long campaigned for equal marriage rights.
Same-sex marriage advocate Pamela Troya, who had been denied a license to marry her partner, Gaby Correa in 2013, told CNN she was "overwhelmed with emotion," after a six-year fight.
"The judges decided to be on the right side of history," she said, adding that now the pair will finally be able to get married.
Human rights activist Cristhian Paula told CNN that the decision "recognizes a historic fight for equality in which every citizen has the same rights, with the same name" and that "an institution like marriage is no longer used as an excuse to segregate and discriminate."

Since 2015, Ecuador has legally recognized same-sex unions, with legislation
providing that couples are granted the same rights afforded to married couples,
with the exception of adoption.
Ecuador's LGBTQ movements have marked some victories over the years,
notably through a 2008 constitutional protection that prohibits discrimination
based on sexual orientation.
In 2013, conversion therapy was outlawed in rehabilitation institutions and, in 2015,
a change to the labor law made it illegal for employers to discriminate against
workers on sexual orientation.
Still, homophobic attitudes continue to prevail in parts of the country and the region.
Only a handful of countries in South America have legalized same-sex marriage,
including Argentina, Brazil, Colombia and Uruguay, according to the


LGBTI people gains more legal recognition, however the state will not approve same-sex marriage.
Ecuadoran President Rafael Correa said on Saturday that several agreements were reached during the meeting with the LGBTI (gay, lesbian, bisexual, transgender and intersex) community held on August 18, including the official recognition of same-sex unions.
"The LGBT community have the constitutional right to register on their union," Correa said during his weekly report.
Previously, the Ecuadoran Civil Registry did not recognize these unions because they had no legal status according to law, however Correa said that from now on this right has to be respected and if denied, the authorities will take action on the matter.
However, Correa said that although he supports these unions, he don't support gay marriage, which according to him corresponds to the union between a man and a woman. But he said he is committed to guarantee the rights of all Ecuadorans.
Correa, a Catholic leftist, has expressed his opposition to same-sex marriage and adoption of children by gay couples in previous occasions.
The Ecuadoran Constitution grants equal rights to "cohabitation partnerships" regardless if they are civil or Catholic marriages, so the LGBT community gains more legal recognition with this legislation.
Article 67 of the Constitution provides that "marriage is the union between man and woman." The article also states that adoption is only granted to heterosexual couples.
In August 2013, a lesbian couple launched the campaign “Civil Equal Marriage: the same rights with the same names" which sought to legalize gay marriage in Ecuador, which have already been approved in Uruguay, Argentina, Brazil and Mexico.
telesurtv.net
Over 5.6 Million Reads Adam Gonzalez at August 25, 2014 No comments: Links to this post 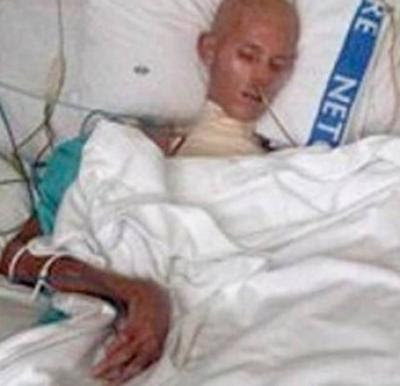 Game ranger course ‘general’ is on trial for murder, child abuse, neglect and allegedly forced teen to eat his own feces. This picture was taken from change a gay in South Africa last summer. This 15 yr old boy died. Called Rangers Submitted themselves to paid 10 weeks or longer coarse. The young man above was there 10 weeks $2400.00 coarse
.
In Ecuador this week:
Seventeen captives were freed from what is being described as a “gay addiction” torture clinic in Ecuador on Thursday.
Several of the patients freed during the raid, including a 15-year-old, were found “barely alive” living in inhumane conditions with some reporting they were being raped and electrocuted in attempts to “cure them” of their homosexuality.
Authorities arrested seven people following a dawn raid on theUnion and Hope Clinic in Pisuli, located north of Quito, a facility which claims to treat their patient’s drug and alcohol problems. But one victim claims she was forced to stand barefoot in a shallow pool of dirty water that was rigged with an electrical charge.
“These people were being held against their will, overcrowded, in degrading, unhealthy conditions,” a justice official said, AFP reports. “They were sleeping on the floor. They had no sewer system. The justice official also confirmed the minor was being held prisoner at the ‘addiction clinic’ to cure him of a ‘behavioral problem’.
All 17 captives were taken to a hospital for recovery.
In July, the Ecuadorian government acknowledged the existence of a network of more than 80 unlicensed clinics in the South American Country who specialize in treating addictions and ‘curing’ homosexuality by regularly torturing their patients. At least two patients have died from their ‘treatments’ at these facilities.
Authorities discovered the unlicensed clinic while on the hunt for 22-year-old student David Romo, also believed to be gay, who disappeared on May 16 (pictured below). Police believe he was held at the Union and Hope Clinic before being transfered to another clinic.
In another case, a young woman named Zulema, came forward last June and said she had been placed in a clinic in Napo by her family to “cure” her of being a lesbian. Zulema said she suffered prolonged physical and psychological attacks during her torture at the facility.
Since March 2012, 18 centres for addiction treatment have been closed — 15 for human rights violations and three for health violations.
by Adrian Garcia
thegailygrind.com
[Image Credit: FiscaliaEcuador and adamfoxieShares]
Over 5.6 Million Reads Adam Gonzalez at November 10, 2013 No comments: Links to this post