For a long time, in London and elsewhere, the narrative around queer nightlife has been one of decline. This perception, sadly, is backed up by fact London has lost 58% of its LGBT+ venues in the last few years, while elsewhere in the UK, Manchester’s gay village has suffered a string of closures, with many of the remaining venues under threat. The closures of LGBT+ venues aren’t really all that different to those of any other kind of nightlife spot: profitable places are shut down because they create even more profit as housing -- a situation helped not by draconian council measures and the laughably ineffectual “Night Czar” Amy Lamé. The issue is not about consumer preference, or at least not entirely.
OPINION
|
By James Greig 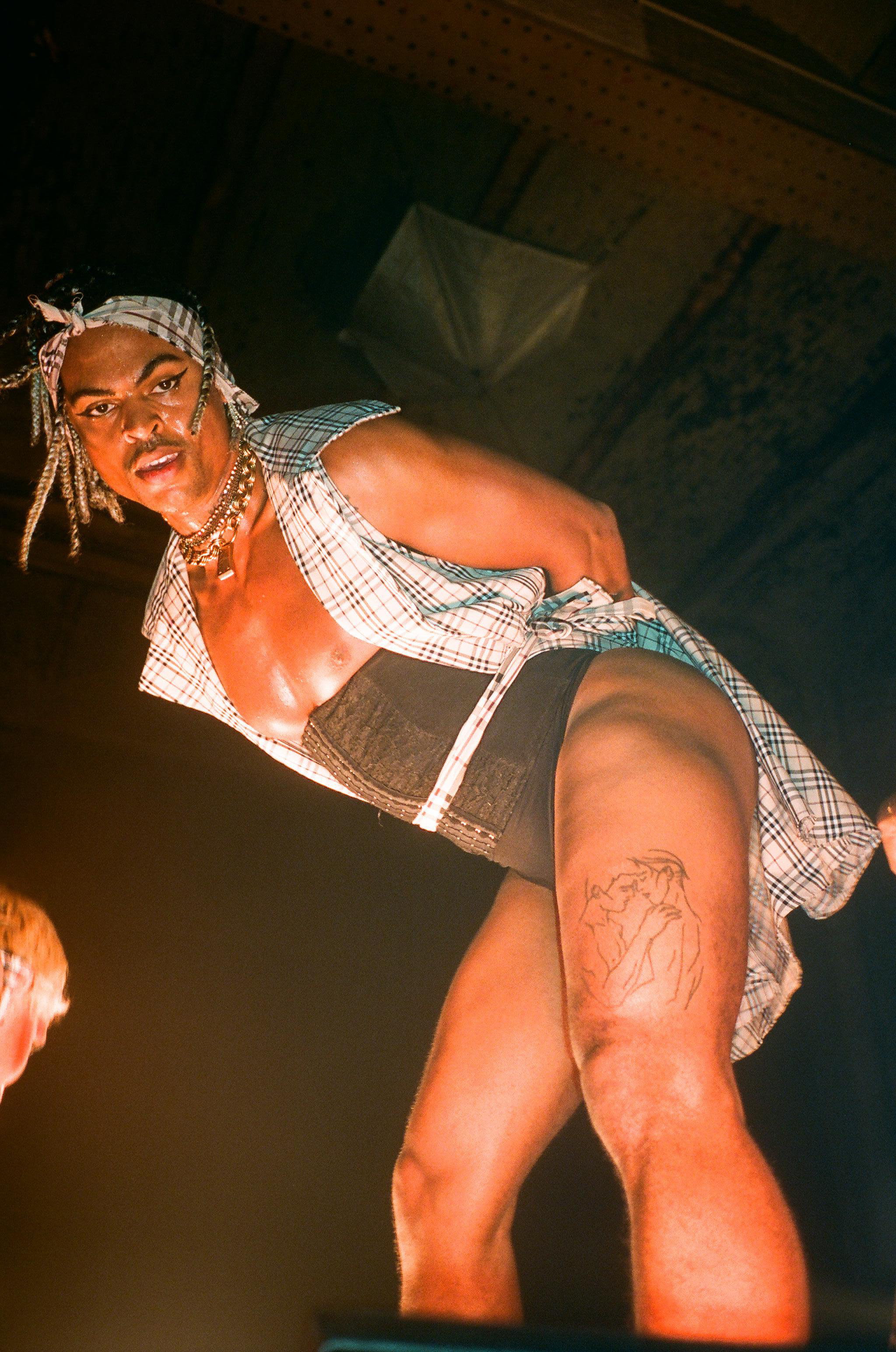 But despite the difficulties facing queer nightlife, the narrative of decline isn’t the whole story. In fact, we’re living through a renaissance of alternative queer club nights, which are often miles ahead of their straight equivalents in terms of both the buzz around them and the caliber of music. In London, Chapter 10, a queer techno night in Hackney Wick, regularly draws in big names in dance music, while more pop-focused nights like Sugar Rush and Knickerbocker pride themselves on their inclusivity and friendliness. It’s all a world away from the femme-phobic, body-fascism of old-school nights like XXL -- although, it has to be said, both Chapter 10 and Adonis have more than their fair share of sweaty topless men with intimidatingly sharp abs. The rise of the alt queer night isn’t limited to London, either: take Glasgow’s excellent Oh141, for instance, a night which provides a space for both the queer community and people of color.


Manchester, too, has seen a similar resurgence (a scene which has recently been documented by Boiler Room) with Kiss Me Again, High Hoops and Homoelectric leading the way. “Over the five years we have been running our night, we have seen a huge change in Manchester’s queer landscape,” Marcos Navarro and Robbie Bloomer, founders of High Hoops, say. “It’s not just an influx in the number of queer parties, but also many venues, who previously didn’t have much of a connection to the queer scene, have started opening their doors to parties like ours. The queer scene has bloomed in all corners of the city, not just Canal Street, which is incredible to see.” With one of the strongest line-ups of any dance festival I’ve ever seen, Homobloc (a day-long event in its first year, organized by the team behind Homoelectric and part of Warehouse Project) represents the apotheosis of the alternative queer night trend. It also marks a crossover point, as the extent to which an event attended by 10,000 people can still be described as ‘alternative’ is debatable.

When I attended Homobloc last weekend, one of the main things I took away was: Manchester is fucking great. It was refreshing to visit somewhere in the UK that doesn’t feel at all secondary to London; Manchester is very much its own center of gravity. Along with Glasgow, it’s the only other city in the UK with the atmosphere of a proper metropolis (apologies to Birmingham): the architecture is imposing, the streets seem to stretch for miles, there are alleyways filled with neon signs that look like the setting for noir cinema. It’s good to remember that queer metropolitan life in the UK doesn’t begin and end in London, that there are opportunities for glamour, hedonism, and culture elsewhere -- although perhaps even considering that something is "worth remembering" is embarrassingly London-centric.


Homobloc itself was a lot of fun. The ethos of Homoelectric has always been one of inclusivity, and things like this have a habit of becoming self-fulfilling -- the atmosphere throughout the event was extremely friendly. It wouldn’t be surprising if it had proved impossible to scale-up the atmosphere of a club night like Homoelectric to festival-size, but it seemed as though Homobloc achieved this -- which is particularly impressive considering it took place in an industrial depot, on a muddy, wet night in November that did little to dispel the cliche of perpetual Mancunian rain. It’s hard to imagine a less Balearic vibe, but it didn’t suffer for it -- although the same can’t be said for the white trainers I’d stupidly chosen to wear.
Luke Unabomber, the founder of Homoelectric, has been involved in queer clubbing for decades and agrees that the moment we’re living through is particularly exciting. “In the last five years, something has happened. There’s more of a sense of togetherness than there’s ever been,” he says. “There’s been a natural reaction, not just in Manchester, but everywhere, against the toxicity of a world that’s becoming quite hateful -- in terms of what’s happening politically. Over the last five years, we’ve seen the rise of nights which have real love, warmth, and inclusivity. There’s been a return to the old acid house spirit, but this time there’s an energy and depth to it which dwarfs even the late 1980s.” Having grown up in the shadow of ‘second summer of love’ romanticism, it’s exciting to hear, from someone who was there the first time around, that the quality of queer clubbing on offer today is as good as it's ever been.


For Luke, the key to the success of the present scene is, above all, its inclusivity. As well as being welcoming on the grounds of race, gender, and body type, it’s also about avoiding being snobbish and po-faced. “You don’t just have to play 130 bpm tech-house to people in black T-shirts for 12 hours, in rooms where no-one is smiling,” he says. “You can be passionate without being overly serious.”
It might sound like a stupid question but, with the high caliber of DJs now playing them, could queer nights be in danger of being too good? If, in the past, we’ve had to worry about our spaces being invaded by hen nights looking to dance to Glee mega-mixes, should we now be worried about straight hyper-beasts with Mixmag subscriptions? For Luke, this isn’t an issue: “The best clubs in the world have always been queer parties for all -- but that includes straight people who enjoy the environment.”


When I speak to the DJ and Kiss Me Again founder Antoin Lindsay, he concedes this might be a problem. “There is definitely the possibility of loads of straight blokes starting to turn up to queer parties. At Kiss Me Again, on nights where we’ve suspected that the DJ we’ve booked would likely attract a straighter crowd than usual, we’ve kept the headliner secret and found that to be effective. I know Chapter 10 does this for all their parties. This approach at least weeds out the people who would come for the specific DJ, stand about looking at the booth, then leave without really engaging with anyone else there.”
Ultimately, the more interesting question than ‘Why has queer nightlife died’ is ‘Why has it endured?’, despite all the factors lining up against it. Perhaps it’s simply because being off your tits at a club listening to good dance music is about as far away as it’s possible to get from the misery of everyday life. In that moment, it’s easy to forget that your existence isn’t always this blissful, that it’s mostly comprised of getting rained on while you wait for the bus, having a sore throat, or submitting, daily, to the mundane tyranny of your employers. It’s impossible to write about the appeal of clubbing without slipping into cliches about transcendence but it can be genuinely ecstatic -- whether you’re on ecstasy or not. None of this is particularly queer -- if you asked a straight lad dancing to Tiesto at Creamfields, you might get a similar answer.


We don’t need to make an appeal for the validity of clubbing based on its cultural value -- the fact that it’s fun, that it continues to be important for so many people, is enough -- but it’s worth saying that queer clubbing has always pushed culture forward. The history of fashion and music over the last 30 years would look very different without queer nightlife. If you’re LGBT+, there’s also undeniably a level of comfort in being in a space where you know that you can kiss whoever or dance as flamboyantly you want, without some dickhead sarcastically whooping -- or worse. The idea that we don’t need queer nightlife anymore is optimistic to the point of delusion.
“As well as being hotspots for innovation, queer clubbing spaces have always been inherently political spaces,” Antoin says. “We’re in the most uncertain political times in generations and it’s essential that the hard-fought rights for queer people that we’ve achieved here are kept, but also extended to those who live in the 71 countries where homosexual sex is still illegal. Maintaining visibility is vital and queer nightlife is just one way we express ourselves to the world and making them aware of our presence.”
It’s important to acknowledge that, despite the depressing statistics first mentioned, the UK’s queer nightlife is morphing in new and interesting ways -- at a difficult time for queer people, let’s take our victories where we can. But we shouldn’t fall into the trap of complacency or triumphalism. This is particularly true in London, where just this week we’ve seen Fold, a club which has hosted queer nights, have its license revoked. Manchester, a city in the midst of a building boom, is becoming increasingly affected by the same issues of gentrification that have plagued London for decades. The future of queer nightlife is by no means certain; after all, there’s no point having all these incredible nights if there are no venues left to host them.