US shutdown Also Shuts down Iconic D-Day Cemeteries in France


When these republicans come on tv to explain, I don’t see how they don’t just break out laughing. What they say is so out of it that even an idiot will know what these bunch of idiots are doing. National cemeteries for the down serving us and our allies.  Not more Important that these idiots ego. They have no respect for anyone, including them selves. That is why they re shooting themselves in the mouth.

The US government shutdown on Tuesday affected military cemeteries worldwide. In France, the famous Omaha Beach cemetery, where thousands of US troops who died in key battles during the First and Second World Wars are buried, was temporarily shut.

By FRANCE 24
Iconic military cemeteries around the world where thousands of American soldiers who died in the First and Second World Wars lay to rest were temporarily closed from Tuesday due to the US government shutdown.
A sign outside the Suresnes American Cemetery and Memorial, west of Paris, informed visitors of its closure. “Due to the United States government shutdown, this site is closed to the public”
But Suresnes isn’t the only one. The move affects some 20 cemeteries in France, Belgium, Britain, Italy, Tunisia and Mexico which serve as the final resting place for troops who died in landmark campaigns such as the Normandy D-Day landings, the American Battle Monuments Commission (ABMC) said on its website.
Normal operations will resume "when a new funding measure is passed by the US Congress and signed by the president of the United States," the ABMC said.
Christopher Palmer, a spokesman for the US embassy in Paris, confirmed the move but said the mission and consulates in the country will remain open.
A restaurant owner near the American cemetery of Colleville-sur-Mer located on a bluff overlooking Omaha Beach, one of the landing beaches of the Normandy invasion, expressed fears that her business would be hit.
The site, which houses the remains of more than 9,300 US troops, attracts more than one million visitors a year.
"Today there were people," she said, speaking on condition of anonymity. "I had 80 to 90 people. Everybody was only talking about this, they didn't know. Even the guides brought tourists.
"But if tomorrow, the cemetery is still closed it could have serious repercussions on our business."
At the American cemetery at Bony, containing the graves of 1,844 soldiers who died in the Battle of the Somme during World War I and other operations, employees did not turn up for work, a worker said.
"But they will be paid because we are under French law," the worker said, joking that these were just "extra holidays".
The US government was forced to shut down on Tuesday, after the houses of Congress failed to agree a new budget. National parks, monuments, and some administrative offices were immediately closed, leaving hundreds of thousands of federal workers temporarily without a job.
It was the first shutdown in 17 years.
(FRANCE 24 with wires)
Over 5.6 Million Reads Adam Gonzalez at October 03, 2013 No comments: Links to this post 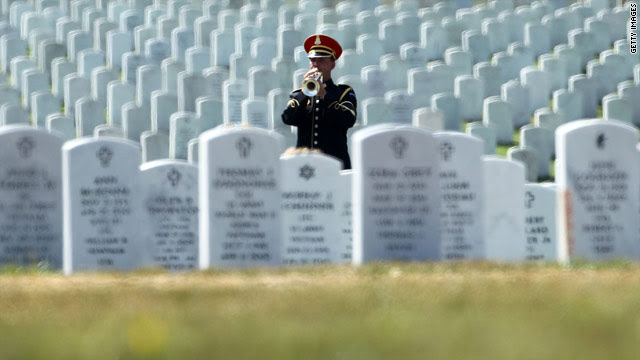 In what's believed to be the first case of its kind, the same-sex spouse of a member of the military will be buried in a national cemetery. "Willamette National Cemetery is a beautiful, peaceful place. Knowing that Nancy and I can join my parents on that hallowed ground is a source of great comfort and healing," she said."I am deeply grateful to my country for honoring and respecting my years of service and my relationship with Nancy, the love of my life," said retired Lt. Col. Linda Campbell, a veteran.
The cemetery is located southeast of Portland, Oregon.Nancy Lynchild, Campbell's partner, died in December of metastatic cancer.
The Department of Veterans Affairs released a statement, saying Secretary of Veterans Affairs Eric K. Shinseki used his discretionary authority in the case.
"This was the first non-Veteran partner of the same gender he was asked to consider, this is the first he has approved. It's important to note that the Secretary did not base his decision on the individual's marital status or state recognized relationship status, but rather based it, in part, on evidence of a committed relationship between the individual and the Veteran," it read.His decision applies just to Campbell and Lynchild; it does not represent an official change in policy.

Though gay people can now serve openly, the military doesn't formally recognize same-sex marriage under the federal Defense of Marriage Act.The divisive act, which was passed in 1996, bars federal recognition of same-sex marriages and says other states cannot be forced to recognize them.

During her 25-year military career, Campbell served in the National Guard and Reserve. She was an Air Force recruiter, a military aide to the Oregon governor and served on the Governor's Military Advisory Council. During the Vietnam War, her duties included Air Force casualty notification for Colorado.Lynchild worked as a home repair specialist and as director of housing with the Housing and Community Services Agency of Lane County, Oregon, according to a statement from Campbell, Oregon Sen. Jeff Merkley and Oregon Labor Commissioner Brad Avakian.The senator applauded the secretary's decision.

"I can only hope that this historic moment is just the first of many for same-sex couples across the nation. All our veterans deserve the honor of being buried in a national cemetery with their partners by their side," he said.
CNN

Marine Corps to spouse clubs: Allow same-sex members or you don't operate on base
Over 5.6 Million Reads Adam Gonzalez at February 16, 2013 No comments: Links to this post