For anyone to have enough time in their life to criticize such a thing in the media means those need more things to do. They are finding fault when we are representing beauty. humanity and human rights of gays loving each other. It if was ugly or it made the EIffel Tower to fall down then is a different story. But to take something like the Empire State in NY or The iconic Eiffel tower in lovely Paris, which the best way to describe it is to go there like I have and you’ll see what beautiful minds can do out of steel.

There you see the two by side. Where is the criticism?

Lighting up the Eiffel Tower in rainbow colours as part of Bastille Day celebrations on Sunday angered and delighted anti and pro-gay rights campaigners alike, although authorities said the display was actually a tribute to Nelson Mandela. 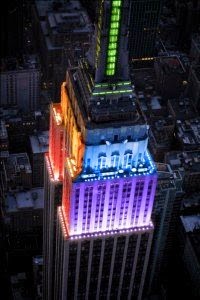 By FRANCE 24
Bastille Day celebrations ended in Paris on Sunday night with a spectacular fireworks display at the Eiffel Tower. As the first sparklers brightened the sky, the iconic tower lit up in the colours of the rainbow. The display both delighted and shocked many, who interpreted it as a nod to France’srecent legalisation of same-sex marriage and adoption.
As the show got underway, spectators at the foot of the Eiffel Tower could hear speakers blasting out a man’s voice saying: “All living beings – man, woman and child – walk in the same vein: equality,” as music played in the background.
“Every human being is a shade of this rainbow palette,” another voice over continued. “For every human, the same opportunities.”
The message of hope and equality had many wondering if there was a political subtext. Was the rainbow-coloured Eiffel Tower meant to mirror the emblematic rainbow flag? Was the voiceover at the beginning of the show meant to closely echo the pro-gay marriage slogan, Marriage for everyone (“Mariage pour tous”)?

The question immediately lit up social networking websites. While Twitter user @bloglaurel exclaimed that “The Eiffel Tower in Marriage for everyone colours is a beautiful symbol!” @PercevaldeB scorned what he viewed as a “Free provocation of the LGBT lobby!!!” and called for French President François Hollande’s resignation.
France’s legalisation of same-sex marriage and adoption left the country deeply divided along political and social lines. In the months leading up to the law’s approval, Paris was the scene of massive protests both for and against the measure.
Paris’s city hall, however, has shot down speculation the rainbow-coloured Eiffel Tower was a tribute to gay rights, according to LGBT website Yagg. Instead, city officials said the display was meant to be a tribute to South Africa’s ailing former leader and anti-apartheid activist, Nelson Mandela.
Over 5Million Reads Adam Gonzalez at October 05, 2013 No comments: Links to this post