Cremation is Not A Better Alternative for the Environment

Over the past four years, cremations have surpassed burials as the most popular end-of-life option in the United States, according to the National Funeral Directors Association. At the same time, companies have been springing up touting creative things you can do with a loved one’s ashes, such as pressing them into a vinyl record, using them to create a marine reef, or having them compressed into diamonds.

Cremation—along with these creative ways to honor the dead—is often marketed as a more environmentally friendly option than traditional embalmment and casket burial. Concern for the environment, in addition to economic considerations, may be driving some of the increase in popularity.

“[For] some people, I bet that’s part of it,” says Nora Menkin, executive director of the Seattle-based People’s Memorial Association, which helps people choose end-of-life options.

But while it’s true that cremation is less harmful than pumping a body full of formaldehyde and burying it on top of concrete, there are still environmental effects to consider. Cremation requires a lot of fuel, and it results in millions of tons of carbon dioxide emissions per year—enough that some environmentalists are trying to rethink the process.

The average U.S. cremation, for instance, “takes up about the same amount of energy and has the same emissions as about two tanks of gas in an average car,” Menkin says. “So, it’s nothing.”

Greener funeral pyres
The particular impact of an individual cremation depends on where and how it’s performed. In India, Hindus have a long tradition of cremating relatives on an open-air pyre. This requires cutting down millions of trees, and the practice contributes to air and river pollution since most pyre cremations occur near water.

Over 5Million Reads Adam Gonzalez at November 08, 2019 No comments: Links to this post

Email ThisBlogThis!Share to TwitterShare to FacebookShare to Pinterest
Labels: Burial 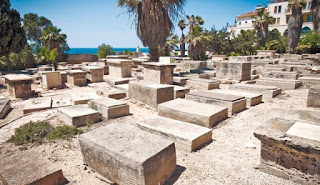 An Israeli TV investigation has found several state-funded Jewish burial societies attempting to keep families of gay and lesbian people from burying their loved ones in certain cemeteries, drawing angry reaction from politicians, LGBT activists and some religious authorities.
Burial society officials in at least four cities told Channel 2 they should seek to bury a deceased gay person in another cemetery, or that the person would not be put in the same section as religious Jews.
“If you can bury him somewhere else, it’s preferable, to prevent aggravation,” a representative from the burial society in Netivot is recorded telling the channel. An official in Atlit also suggests burial in another city nearby.
In Rosh Ha’ayin, a representative says the burial will have to be done “quietly” in an area on the edge of the cemetery.
“We’re not going to bury someone who keeps Torah and [Jewish] commandments next to one like that,” he says in the recording.
In Kiryat Motzkin, a suburb of Haifa, the burial society representative told the channel that a gay couple could not reserve a joint plot like a regular married couple and would be buried separately “in the wall.”
“If you don’t have a wife according the (religious) law, you can’t use a family plot for a husband and wife. We go according to the halacha, sir, Jews.”
The report drew widespread condemnation. Channel 2 said MK Yael German of the Yesh Atid party is to convene an urgent meeting in the Knesset to address this issue.
“Israel has laws that ban this kind of discrimination, but we see they are simply not enforced,” said Oded Fried, the former head of Aguda – the Israeli National LGBT Task Force, who called on the Knesset to act so that we are all “treated equally.”
Some religious leaders also slated the move.
“If the details of this report are true and the burial societies or their representatives are refusing to bury people because of their sexual orientation during their lives, they are contravening Jewish law and desecrating the dead,” said Rabbi David Stav, the head of Tsohar, a group of Orthodox rabbis who aim to bridge the gaps between religious and secular Jews in Israel.
Stav, speaking to the website Srugim, noted that in no other way did the societies differentiate between those who were religiously observant or not.

BY TIMES OF ISRAEL STAFF
Based on TV report
Over 5Million Reads Adam Gonzalez at January 13, 2017 No comments: Links to this post

Hundreds of thousands of people with little Cuban flags and photos of Fidel Castro gathered on Saturday evening in the Antonio Maceo Square in Santiago de Cuba for the final farewell to the former president, whose ashes were buried in a private ceremony on Sunday  morning.
“Fidel taught us that it was possible, yes you can and yes you can,” said Raul Castro, visibly moved, to the audience. “He taught us that one could resist without renouncing the principles and achievements of socialism.”
The event, the culmination of a four-day caravan of his ashes from the capital to eastern Cuba, was attended by the presidents of Venezuela, Nicolas Maduro; Bolivia, Evo Morales; and Daniel Ortega, as well as former presidents Luiz Inacio Lula da Silva and Dilma Rousseff of Brazil and former soccer legend Diego Maradona, among others.
“Uu aaa, Fidel is not leaving” and “Raul, my friend, the people are with you”, “I am Fidel” and “Raul is Fidel” were the slogans that were heard over and over again in the square of the colonial city of southeastern Cuba. The Cuban president was greeted with shouts of “Raul, Raul”.
Castro recalled in his speech the difficult moments that the country experienced during the 1990s, when Cuba entered a severe economic crisis after the collapse of the former Soviet Union, and said that at that time and others of his life Fidel Castro “never lost faith in victory.”
The wooden urn with the ashes arrived Saturday to Santiago de Cuba at the end of a of a 4-day, 600-mile journey from Havana, in several stages, during which it passed through towns and cities on a platform attached to a military jeep.
Starting Wednesday thousands of people took to the streets to watch the caravan pass, to the cry of “I am Fidel, I am Fidel”. On Tuesday night a memorial had already taken place with foreign dignitaries in Havana’s Revolution Square.
“Tell me in what country is a president given a sendoff like this,  Cubans pay tribute to who deserves it, and Fidel deserves a farewell like this and more,” said Matías Gonzalez, a bus driver who transported people to the event.
“It’s historic, one day I’ll be able to recall that I was here,” said Carlos Martinez, a 16-year-old student in his school uniform.
The former Cuban president, a historical figure with fervent defenders and staunch critics, died on Friday November 25 at age 90. His remains were buried Sunday in a simple ceremony, according to Raul Castro, in the cemetery of Santa Ifigenia of Santiago de Cuba, where Cuban national hero Jose Marti is also buried.
“This is history. Fidel is very big in Latin America, that’s why we have a lot of respect for him,” said Juan Martín Cambra, an Argentinean who was close to the Kirchner movement, and who bought a plane ticket with other friends because they did not want miss the historic moment.

Havana Times
Over 5Million Reads Adam Gonzalez at December 04, 2016 No comments: Links to this post

There Are Offers To Bury The Boston Bomber But No Money

The Massachusetts funeral director who is trying to find a cemetery that's willing to bury the body of Boston Marathon bombings suspect Tamerlan Tsarnaev says he has gotten 120 offers from graveyards around the U.S. and Canada.
But when Peter Stefan "calls officials of the cities or towns involved, nobody wants the body," The Associated Press reports.

We wrote Monday about the rejections Stefan had gotten from private cemeteries in Massachusetts and the statement from the city manager in Cambridge, Mass., who said Tsarnaev's body wasn't welcome at the public graveyard there.
NPR.org's Alan Greenblatt follows up today with a look at an ancient story: The notion "that some individuals may have been so villainous as not to deserve burial.”

Where might Tsarnaev's body end up? The AP adds that the suspect's mother wants the remains to be taken to the family's native land, Russia. Funeral director Stefan, though, has told the wire service that "he made calls to Russia, but that it was hard to get anyone to respond. He said he is working on other arrangements, but declined to be more specific." Cremation is not an option for Tsarnaev's Muslim family.

The April 15 bombings killed three people and wounded more than 250. Tamerlan Tsarnaev, 26, and his 19-year-old brother, Dzhokhar, are the main suspects. Authorities say they also killed an MIT police officer four days later. Tamerlan Tsarnaev died after a gun battle with police on April 19. Dzhokhar Tsarnaev was captured later that day. He is being held at a federal prison hospital facility in Massachusetts. The younger brother faces a charge of using a weapon of mass destruction.
NPR’s Mark Memmott
Over 5Million Reads Adam Gonzalez at May 08, 2013 No comments: Links to this post