Lebanese drag queen Anissa Krana checks her makeup in the mirror at a friend’s house in Beirut ahead of the Grand Ball. The drag scene in the city has steadily grown over the past year. (Natalie Naccache for The Washington Post)
By Louisa Loveluck and
Ghalia al-Alwani
Washington Post


BEIRUT — Anissa Krana is the center of attention, sitting quiet and cross-legged in the middle of the room. The storm of the year has started howling outside, and the party is just beginning around her.
Friends chatter and buzz, painting lips and cheekbones on her face; everyone’s eyes are on the clock. Doors at 9. Onstage from 11.
The star of the show takes a deep breath.
Welcome to Beirut’s drag-queen scene and the night of the Grand Ball. For many, this evening would be a debut, and an introduction to a community that prides itself on its flair. But for Anissa Krana — a stage name for Aniss Ezzeddine, 22 — it is the high point of her first year performing, and the biggest audience yet.
The Middle East is known for its conservatism, but with its febrile nightlife and more liberal mores, Beirut has long been hailed as a relative haven for the region’s LGBTQ community, though not without challenges.
Shows are often impromptu and take place under tight security. Some fliers make no mention of venues, so information travels by word of mouth.
Performers usually turn up in their street clothes, transform into a whole new character, then shed their costumes again before slipping back outside. Anissa, though, will be making an entrance tonight. A car to the venue has been organized, and she wants to enjoy the reactions of her fellow passengers.
Drag has deeper roots here than elsewhere in the Arab world, and over the past year, the scene has started to flourish. Many here who became drag performers grew up watching Bassem Feghali, a comedian who gained popularity in the early 2000s by impersonating female singers. In 2015, Evita Kedavra, a Palestinian Armenian drag queen, took the stage, and one by one, the circle grew. Anissa Krana has glitter applied at a friend’s home in Beirut. Her makeup usually takes hours to apply. (Natalie Naccache for The Washington Post)
With dozens having taken the plunge since last year’s Grand Ball, the artists credit one celebrity above all: RuPaul and his wildly successful talent show “RuPaul’s Drag Race.”
“That made a huge difference,” said Narcissa, another drag queen, of the Emmy-winning U.S. television series. “Suddenly everyone was watching it, and you just thought, ‘Wow, I could do that, too.’ Those artists taught us a lot.”
Now in its 10th season, the show has become mandatory viewing for most of Beirut’s queens, downloaded or streamed over the city’s famously poor Internet connection. “I just fell in love with it,” Anissa Krana said. “When you put on your wig for the first time, then the makeup, you just get into that character so fast.”
Emerging from those varied influences is a scene that blends an homage to American drag culture with something distinctively, and irreverently, Lebanese. Anissa Krana and Narcissa exude Hollywood glamour, all tumbling curls and dresses with jewels. Performers like Kawkab Zuhal set kohl liner on dramatic lashes for acts lip-syncing to Arabic music or telling sharp jokes about Lebanon’s crumbling political system.
The city’s drag scene has taken off just over the past year, according to those in the know, with events rotating around a handful of trusted clubs. The Grand Ball earlier this month was to be at one of the biggest, with some 30 contestants competing in front of an exuberant, tightly packed crowd. The energy swelled as the performers rapped and belly-danced, their dresses depicting the four classical elements: earth, water, air and fire.
Sometimes, worlds collide. In October, to almost everyone’s surprise, “RuPaul’s Drag Race” star Sasha Velour strode through one of Beirut’s most famous civil war landmarks, a brutalist-style cinema still riddled with bullets known as the Egg. Videos from that party show the diva, dressed in scarlet sequins, sashaying past the crowd, sometimes pausing for the camera while others studiously ignore it.
“No one knew it was going to happen,” said Eli Rezkallah, the founder and creative director of Plastik Magazine, which organized the event. And when the music played, he said, the crowd was spellbound. “It was one of the most magical moments of my life,” Rezkallah said
Ahead of a performance, artists might spend weeks creating an outfit to suit their character.
“My drag is what I couldn’t be when I was young,” said one performer, who spoke on the condition of anonymity out of fear for his safety. He said he had started trying on his mother’s heels and makeup in secret, years before coming out as gay. When his parents found out, they barred him from their house and his friends turned on him.
He lives with other drag queens now. “They’re like my family,” he said. “We help each other with food, with makeup, money — everything.”
Others have faced similar trials, kicked out of their homes and ostracized by the communities in which they grew up. Krana’s make up palette. (Natalie Naccache for The Washington Post)
Although the Lebanese state is more tolerant of homosexuality than other Arab governments, the penal code can still be invoked to make arrests. In May, the organizer of Beirut’s Pride Week was detained on charges of “incitement to immorality,” before he was pressured into canceling a poetry reading, a sexual-health discussion and a legal-literacy workshop.
“We don’t have stable laws here,” said Narcissa. “One minute, the state is looking one way; the next, it’s staring right at us.”
Performers who choose to travel to their shows in drag can be stopped at checkpoints. Venue owners risk their licenses by putting on an event. Only a small number of venues are recognized as “safe spaces” for the drag and broader LGBTQ community, and owners must have strong ties to local authorities to ensure the police won’t turn up and harass attendees.
“If I was doing this in New York, I wouldn’t think twice. I would just do it. But in Lebanon, you have to stop, you have to discuss everything,” Rezkallah said.
And yet the shows go on — usually without a hitch.
“I want people to dream that this is normal, that this can happen in Lebanon, without knowing what we went through to get them there,” Rezkallah said. “I don’t want people to feel the struggle. I just wanted people to enjoy themselves.”
By 8 on this recent evening, Anissa Krana was ready, her torso nestled in a royal-blue corset and glowing in the apartment’s low light. She wore thigh-high boots with heels sturdy enough to last the night. A platinum-blond wig was her pièce de résistance.
“We’re going to have fun tonight,” she told friends as she struck a pose. With hands on her hips, she was the most commanding presence in the room. Then she turned on her heel and walked out toward the storm.
The car was waiting. It was time for the Grand Ball. Krana in her royal-blue corset, thigh-high boots and platinum-blond wig. (Natalie Naccache for The Washington Post)
Over 5Million Reads Adam Gonzalez at January 29, 2019 No comments: Links to this post 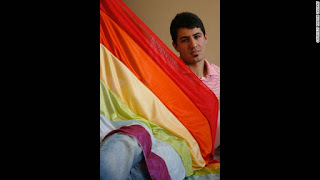