UPDATE 9:25 AM: He’s out at the Daily Beast but CNN has decided not to cut Howard Kurtz loose for his sloppy reporting about NBA player Jason Collins’ coming out. “There has been no status change with Howard Kurtz, he remains the host of Reliable Sources.  He will address this issue on the program this weekend,” a CNN spokesperson said today. No word if the Jeff Zucker-run news network will be renewing Kurtz’s contract as the long time host of the Sunday media show when it is up.
1st UPDATE, THURSDAY PM: Howard Kurtz’s job problems today may not be over. I have learned that CNN is reviewing what happened at the Daily Beastand its Reliable Sources host’s sloppy reporting on NBA player Jason Collins. “Some things have been raised this week and CNN wants to review the situation,” a CNN insider tells me about the cable news network’s relationship with its long time Sunday media show host after the Daily Beast dumped him Thursday. No word yet if that means Kurtz is canned at CNN but the fact that such a discussion is occurring can’t be a good sign.
PREVIOUSLY 1:42 PM: Media critic/reporter Howie Kurtz is the host of CNN’sReliable Sources but he was fired today from his other gig at The Daily Beast for sloppy reporting on pro basketball player Jason Collin’s coming out. “@TheDailyBeast & @HowardKurtz have parted company…”tweeted Editor-in-Chief Tina Brown. At issue was that Kurtz reported wrongly that Collins hadn’t made public he was once engaged to a woman – when he had. The Daily Beast retracted the story on Wednesday. This didn’t seem to rise to the level of a firing offence. According to Kurtz tweets, “This was in the works for some time… But as we began to move in different directions, both sides agreed it was best to part company.” Kurtz had been the Washington Post media critic since 1990 but took a buy-out in 2010. He has done double duty on the CNN media show since 1998. In the past Kurtz has been criticized for writing about CNN and hosting the show. As of right now, sources tell me that Kurtz’s CNN gig is secure at the newly Jeff Zucker-run network. 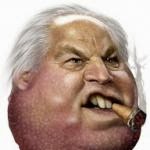 Adam Gonzalez: I don’t like reporters that after so many years on this planet are still not prepare with the changes of this nation, the world and the network that they work for. It seems he is not crazy about gay baseball players and Jason busted his bobble. So he went after him with lies. Well suck on it Howie. You thought that was the holly grail, untouchable and straight... basket ball athletes!. Howie Wish you go and work with the fat man with the big belly and cigar, he puts out tons of ashes not to mention deadly gas. You could be an ash cleaner and never worry about him saying anything nice of gays or true, like you.
Howie I hope your family gets touch by the birth of many homosexuals and I hope none of them do any sports but  be ballet dancers.

Over 5Million Reads Adam Gonzalez at May 03, 2013 No comments: Links to this post