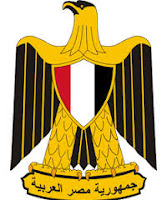 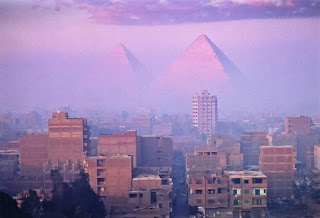 If youa are going to Egypt, you might want to wait for more information of how it is that tourists dropped dead at a hotel~~*
Thomas Cook is removing all its customers from a hotel in Egypt after the death of a British couple.
John Cooper, 69, and his wife Susan, 63, from Burnley, died while staying at the Steigenberger Aqua Magic in the Red Sea resort of Hurghada.
Egyptian authorities said Mr Cooper was taken ill with heart problems, but the couple's daughter said the cause of their deaths was unclear.
Kelly Ormerod said her parents had been "fit and healthy".

'Died in front of me'

Mrs Ormerod, who was also at the hotel with her three children, said in a statement to Lancashire-based radio station 2BR: "They had no health problems at all.
"We have no cause of death, a post-mortem is under way.
"Dad never went to hospital, he died in the hotel room in front of me. I went to hospital in the ambulance with Mum, where she passed away."
Mrs Ormerod praised the support from Thomas Cook, which said it had received "further reports of a raised level of illness among guests".
In a statement, Thomas Cook said 301 holidaymakers will have options for alternative hotels from Friday onwards and those wishing to go home will be flown back on Friday.
It added: "Safety is always our first priority, so as a precautionary measure we have taken a decision to remove all our customers from this hotel.
"While we understand this is upsetting for those on holiday, we believe this is the right thing to do."
Sven Hirschler, senior director of corporate communications for the hotel's parent company Deutsche Hospitality, said there was not an unusual level of illness among the 1,600 guests staying at the hotel.
He added Mr Cooper had complained of low blood pressure and was treated by the hotel's on-site doctor on the night he died.

Other guests have told the BBC about their experiences with illness during stays at the Steigenberger Aqua Magic.
Janine Traviss, from Oldham, and her partner fell ill with a stomach bug during a holiday which ended earlier this month.
"I subsequently have been ill for several weeks now since returning and had to visit the doctors on two occasions with two full weeks of antibiotics.
"I am still recovering and still feel very tired and exhausted most days."
Thomas Cook said it is working closely with the hotel and is supporting the local authorities with their investigations.
It stated the hotel was last audited late last month and received an overall score of 96%.
"We will be contacting those customers due to travel to the Steigenberger Aqua Magic Hotel in Hurghada in the next four weeks to offer alternative holiday options," the tour operator added.
Mrs Cooper worked at the travel firm's Burnley branch, which was closed on Thursday.
She was earlier described as "loyal and long-serving" member of staff by the company.
The listing for the hotel on the Thomas Cook website includes a line saying: "Sorry, there is currently no availability."
Are you a guest at the hotel Steigenberger Aqua Magic or staying elsewhere in the resort? Share your experience by emailing haveyoursay@bbc.co.uk
Over 5.6 Million Reads Adam Gonzalez at August 25, 2018 No comments: Links to this post

Why torurists like to visit countries with very limited civil rights and lots of police power thinking they will be inmune in their life-style is hard to understand. In Rome do as Romans do or go to Greece Instead. adamfoxie 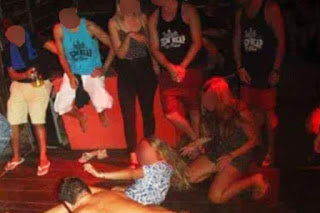 A total of 10 people from various countries were detained over the police claims, including two women, following a villa party Thursday. The group has been told they could face up to one year in prison and could wait six months for the case to go to trial.

Confusing allegations Photo issued by the Cambodian National Police Cambodian police released images online appearing to show clothed and laughing tourists, some in sexually suggestive positions. However, one of the men arrested, speaking anonymously, said that the people in the images released were not those arrested in this case.

They said: “Honestly, it was really confusing. Everyone was confused. They raided, rounded us up – there were about 80 to 100 people at this party, some of them were tourists. There were about 30 of them [police officers].” Looked after One of the arrested men confirmed that Cambodian authorities were treating them well, and the group had been bought pizza by prison guards.

They have now been assigned a Cambodian lawyer and are expected in court Sunday. One anonymous prisoner said that despite the treatment, their parents were “worried sick” about the situation. The prisoner added: “Our parents are doing what they can. It’s really just trying to keep a good vibe until we know the outcome.”

Over 5.6 Million Reads Adam Gonzalez at February 01, 2018 No comments: Links to this post