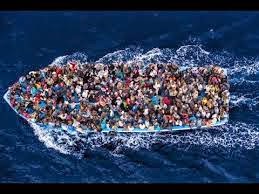 A shipwreck in which about 400 migrants are feared to have died off Libya this week was caused by excitement at the sight of rescuers, survivors say.
They told officials that the boat capsized when many migrants moved to one side as a rescue ship approached.
Monday's sinking is among the worst migrant tragedies in the Mediterranean.
Aid agencies say not enough is being done to save the lives of the rising number of people trying to cross the sea to Europe.
Up to 20,000 people fleeing poverty and conflict have made the perilous crossing to Italy since the start of the year, similar to the same period in 2014, a year when a record 170,000 reached the country's shores.
Almost 10,000 people have been picked up in recent days, and more boats are heading for the Italian coast. The Italian coast guard rescued about 140 people from the boat that capsized on Monday. Survivors say more than 500 people were on board when it sank.
Joel Millman, a spokesman for the International Organization for Migration (IOM) quoted by Reuters news agency, says that at least a third were women and children.
"When the men on the deck became restless and started moving about because a rescue boat was beginning to approach them, the boat capsized and water flooded the hull," he said. "Women and children died immediately."
More than 500 people have died attempting to cross the Mediterranean since the start of the year, 30 times more than in the same period last year.
If the toll from latest tragedy is confirmed, the number of deaths for the year would rise to 900.

The warmer weather means calmer seas off the coast of Libya - and more migrants trying to make the journey to Italy.
The coastguard here warns that with clear skies expected the next few days hundreds will attempt the crossing. Most are from sub-Saharan Africa. They pay people smugglers £500 (700 euros; $740) for a place on crowded and underpowered boats.
In Misrata the morgue is already full of corpses of drowned men and women who were washed up on nearby beaches.
Libya, with two rival governments and facing a threat from hundreds of Islamic State fighters, is in turmoil. It is unable to secure its own borders, much less stop those already there from heading to Europe.
Clear skies spell death for migrants
Meanwhile the charity Medecins Sans Frontieres (MSF) said unprecedented numbers of refugees were arriving in Greece's Dodecanese islands - off Turkey's south-western coast.
MSF said about 100 new migrants were landing on the islands every day. It urged Greek and EU officials to do more to receive them.
UNHCR spokesman Federico Fossi told the BBC there was no indication that the numbers risking their lives to come to Europe would drop soon.
"There are still people fleeing from wars and persecution in countries such as Syria, dictatorships in countries such as Eritrea," he said.
He called on the European Union "to step up a strong search and rescue mechanism" to save people's lives.
As many as 3,500 migrants died while trying to cross the Mediterranean last year, officials say, as record numbers tried to reach Europe.
Late last year the Italian government scaled back a maritime rescue operation launched in response to another tragedy, in which 366 migrants died off the island of Lampedusa.
There were concerns that the Mare Nostrum mission was encouraging migrant crossings, and a more limited EU border security operation took over.
Since the fall of Muammar Gaddafi in 2011, Libya has been without a stable government allowing trafficking networks to thrive.

Over 5Million Reads Adam Gonzalez at April 16, 2015 No comments: Links to this post