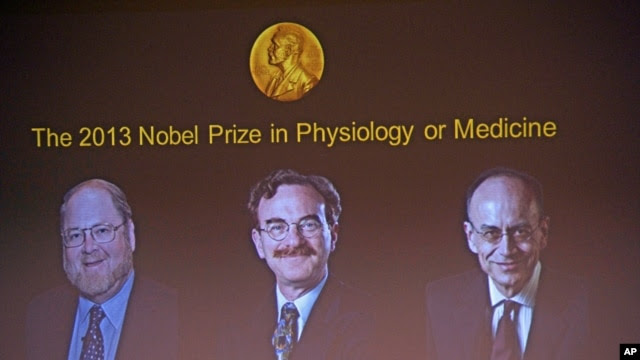 James Rothman and Randy Schekman, of the US, and German-born researcher Thomas Suedhof are projected on a screen, in Stockholm, Sweden after they were announced as the winners of the 2013 Nobel Prize in medicine, Oct. 7, 2013.
Three researchers studying how cells transport chemicals within and between cells have won this year’s Nobel Prize in Physiology or Medicine.


To explain what the researchers discovered, Harvard University cell biologist Tom Kirchhausen says it helps to think of each cell in the body as a tiny city.

“You have people that are moving from one place to the other to do whatever function they do,” he said. “You move from place to place in carriers or containers,” like buses, trucks or trains, he says.

In this analogy, the people are the proteins, hormones and other chemicals that do the work and carry messages in our bodies.

Insulin, produced in the pancreas but used throughout the body, is one example. Or neurotransmitters that carry brain signals from one neuron to another.

The transport system - the cell’s tiny buses, trucks or trains - has to get them from one part of the cell to another, or to the outside of the cell. If the system breaks down, the results are diseases like diabetes or neurodegenerative disorders.

The process is so fundamental to life that evolution has not changed it much from yeast to people.

Randy Schekman at the University of California at Berkeley discovered in yeast the genetic blueprints for the proteins that make up the cellular delivery system.

Later, says neuroscientist Erik Jorgensen at the University of Utah, researchers found out “that the proteins involved in this process that allow us to think, that allow nerve cells to communicate with one another, are precisely the same ones that were found in yeast.”

But Schekman’s work was just a piece of the puzzle. James Rothman at Yale University discovered how each little cellular bus delivers its passengers to the right station.

“From Schekman’s work we had a list of the players,” Jorgensen said. “What Rothman showed us was who was interacting with whom.”

And the third prize winner, Thomas Südhof, discovered how in nerve cells those little buses release their passengers quickly and precisely in response to a signal.

At a press conference, Rothman noted that his good mood was due to his neurons secreting endorphins, one class of neurotransmitters delivered through the mechanism he and his colleagues had discovered.

Rothman said he was lucky to get his start at a time when a young scientist could take risks to pursue an idea.

“I’d like to think that that kind of support existed today, but I think there’s less of it," he said. "And it’s actually becoming a pressing national issue, if not an international issue.”

He said U.S. funding for scientific research has declined in recent years, threatening American leadership in science and technology.
Over 5.6 Million Reads Adam Gonzalez at October 08, 2013 No comments: Links to this post

Email ThisBlogThis!Share to TwitterShare to FacebookShare to Pinterest
Labels: Nobel

Nobel Peace Prize Would it Sink in Russian Mud? or Shine with a Deserving Choice

Email ThisBlogThis!Share to TwitterShare to FacebookShare to Pinterest
Labels: Nobel 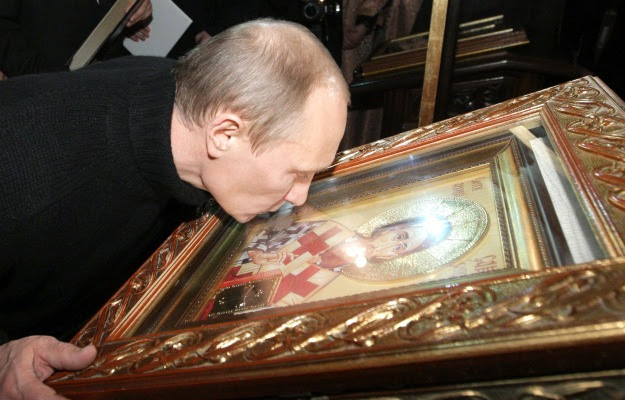 The Russian leader is been recommended to the Awards Committee for the Nobel Peace Price.
Iam sure that if he won he would share it with the Statue of Lenin and that way it would be more Nationalistic and it would make as much sense.

Citing his role in preventing a US military strike against Syria, the International Academy for Spiritual Unity and Cooperation of Peoples of the World has nominated Russian president Vladimir Putin for the Nobel Peace Price, Pink News reports.

The recommendation of the Russian organization, which is reportedly on a list of those approved to make such nominations, reads in part: “Being the leader of one of the leading nations of the world, Vladimir Vladimirovich Putin makes efforts to maintain peace and tranquillity not only on the territory of his own country but also actively promotes settlement of all conflicts arising on the planet.”
In the leadup to the Sochi Winter Games next year, Putin signed off on a number of anti-gay laws, including a nationwide measure banning so-called "propaganda of nontraditional sexual relations" among minors and one that bans foreign gay couples from adopting Russian children.
In the wake of indications that athletes are willing to use the forum of athletic competitions to take a stand against the anti-gay laws, Putin also issued a decree that prohibits “gatherings, rallies, demonstrations, marches and pickets” that are not part of the Sochi Olympics and Paralympics, from Jan 7 to March 21.
Both American middle-distance runner Nick Symmonds and Swedish high jumper Emma Green Tregaro leveraged the spotlighton the World Athletics Championships in Russia to take a stand against the crackdown on LGBT people.
The International Olympic Committee has also come under fire for accepting Russian authorities' assurances that there'll be no discrimination at the 2014 Games, and for adopting a hands-off aproach in the face of the host country's enactment and defense of anti-gay legislation.
Putin, along with a number of other political leaders, continues to insist there's no discrimination against LGBT Russians.
The author of St Petersburg's anti-gay gag law, Vitaly Milonov, who harassed a number of guests attending a queer festival in the city, also dismissed a reporter's questions about violence LGBT Russians face, saying it's "fake information" and "not true," and claimed that it's actually gay people who perpetrate violence against straight people.
Sergei Naryshkin, chairman of the State Duma, also told a meeting of the Council of Europes' parliamentary assembly that his country's anti-gay propaganda law will not lead to discrimination, saying there aren't "concrete examples" of that.
Another measure, proposed by State Duma deputy Alexei Zhuravlev, would deprive LGBT Russians of their parental rights if approved. That measure is reportedly scheduled for consideration in February, Gay Star News says.
Adam Gonzalez with sourcing of Dailyxtra.com

Over 5.6 Million Reads Adam Gonzalez at October 03, 2013 No comments: Links to this post