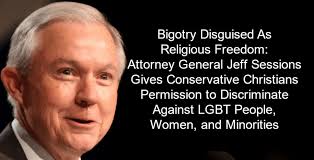 During his 20 months in office, Attorney General Jeff Sessions has swept in perhaps the most dramatic political shift in memory at the Justice Department, from the civil rights-centered agenda of the Obama era to one that favors his hard-line conservative views on immigration, civil rights and social issues.

Now, discontent and infighting have taken hold at the Justice Department, in part because Mr. Sessions was so determined to carry out that transformation that he ignored dissent, at times putting the Trump administration on track to lose in court and prompting high-level departures, according to interviews over several months with two dozen current and former career department lawyers who worked under Mr. Sessions. Most asked not to be named for fear of retribution.

President Trump has exacerbated the dynamic, they said, by repeatedly attacking Mr. Sessions and the Justice Department in baldly political and personal terms. And he has castigated rank-and-file employees, which career lawyers said further chilled dissent and debate within the department.

The people interviewed — many yearslong department veterans, and a third of whom worked under both the Bush and Obama administrations — said that their concerns extended beyond any political differences they might have had with Mr. Sessions, who is widely expected to leave his post after November’s midterm elections.

“Since I’ve been a lawyer, going back to the late 1970s, I can’t recall a time when morale has been as low as I have heard from some former colleagues,” said Robert Litt, a former Justice Department official during the Clinton administration.

A department spokeswoman, Sarah Isgur Flores, said that Mr. Sessions and other senior law enforcement officials were committed to the department’s mission of upholding the rule of law, and that they had heard no complaints about that.

“We know of no department employee who is opposed to policies that uphold the rule of law and protect the American people — which are precisely the policies that this department has implemented and embraced,” Ms. Flores said in a statement.

In one instance, Mr. Sessions directly questioned a career lawyer, Stephen Buckingham, who was asked to find ways to file a lawsuit to crack down on sanctuary laws protecting undocumented immigrants. Mr. Buckingham, who had worked at the Justice Department for about a decade, wrote in a brief that he could find no legal grounds for such a case.
Reminding Mr. Buckingham of the attorney general’s bona fides as an immigration hard-liner, Mr. Sessions asked him to come to a different conclusion, according to three people who worked alongside Mr. Buckingham in the federal programs division and were briefed on the exchange.

In stripping protections last year for transgender people under the Civil Rights Act, Mr. Sessions consulted no departmental experts, leaving out Diana Flynn, the head of the civil rights appellate division who led the effort to add the protections in 2014, and many of her career staff.

The process left little room for debate. “Edicts came down, and it was up to us to try to implement them,” said Ms. Flynn, who has left the Justice Department for Lambda Legal, a lesbian, gay, bisexual and transgender legal aid organization.

Similarly, a flare-up over the Affordable Care Act this summer occurred after the department’s political leaders urged a judge to find unconstitutional two of the law’s key elements, a reversal of the government’s longstanding position.

“This is a rare case where the proper course is to forgo defense” of existing law, Mr. Sessions said at the time, adding that Mr. Trump had approved the step. Three career lawyers withdrew from the case, including Joel McElvain, a 27-year department veteran, who made headlines by resigning in protest.

After more than an hour, the officials running the meeting said they understood the employees’ concerns and simply encouraged them to continue doing good work.

Attorneys general have long confronted resistance when they implement ideological initiatives that career lawyers view as outside the Justice Department’s mission.
During the Bush administration under Alberto R. Gonzales, the department formed a task force to crack down on pornography; investigators focused on only a small swath of the most egregious examples.

When political appointees under Mr. Holder wanted to abandon the government’s defense of “don’t ask, don’t tell,” Jody Hunt, a well-regarded career attorney, argued successfully that the department had a legal duty to defend it.

Mr. Sessions is not bound to follow the advice of career Justice Department lawyers, “and, if he doesn’t like recommendations, to ignore them,” Mr. Litt said. “But it would be inappropriate to ask people to tailor legal judgments to policy preferences.”

Without directly addressing the department’s positions on transgender rights or the Affordable Care Act, Ms. Flores noted that its reversals on workplace arbitration, voting rights, labor unions and the appointments of federal officials were validated by wins at the Supreme Court.

Trump’s Shadow
Mr. Trump has stoked much of the unease at the Justice Department. He assailed the prosecutors who won a conviction of his former campaign chairman, and he attacked the plea agreement struck with his longtime personal lawyer. He castigated Mr. Sessions for not investigating perceived White House enemies — drawing a rare rebuke from the attorney general — and for daring to pursue cases against Republican lawmakers. 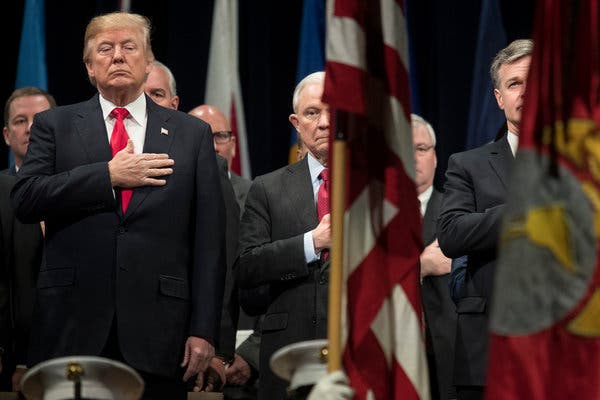 Frequently targeted Rod J. Rosenstein, who as deputy attorney general oversees the day-to-day operations at the department as well as the special counsel investigation. In a turnabout this month, Mr. Trump declared his relationship with Mr. Rosenstein good, to the relief of some federal prosecutors. To them, Mr. Rosenstein’s office symbolizes the department’s independence because he oversees its inquiries into the president and his inner circle.

More unnerving, employees said, was the president’s threat to remove the security clearance of Bruce Ohr, a civil servant who worked to combat Russian mobs and oligarchs. The message, said one lawyer in the criminal division: Doing your job can make you vulnerable to a career-ending attack.

Two former attorneys said that they stepped away from Russia-related work as a result.
“The underlying message from Trump is that department employees are either enemies of the White House or vassals doing its bidding,” said Norman L. Eisen, who served as special counsel for ethics and government reform under Mr. Obama. Mr. Eisen is co-counsel for the plaintiffs in a lawsuit accusing Mr. Trump of violating the Constitution by maintaining a stake in his hotel in Washington.

As a target of Mr. Trump’s high-profile rebukes, Mr. Sessions has gained cautious support even from some rank-and-file lawyers who find his culture wars zeal distasteful. They cited instances where he pushed back on Mr. Trump’s broadsides and his simply enduring months of presidential invective.

Empty Spots
Internal events intended to boost morale have also proved tense. Guy Benson, a Fox News commentator, was chosen to speak at a gay pride event over the objections of the department’s L.G.B.T. affinity group, DOJ Pride, Justice Department lawyers said.
DOJ Pride members held a separate event, where one employee spoke about how progress for L.G.B.T. Americans had regressed under Mr. Trump. Department officials would not comment on the episode.

Some of the lawyers interviewed also said that departures of respected leaders and longtime career lawyers has weakened morale. Besides Ms. Flynn, Mr. McElvain and Mr. Buckingham, others who left included Doug Letter, the head of the civil appellate branch, and David Laufman, the chief of the counterintelligence section.

“Any given person wants to spend more time with his family,” said Benjamin Wittes, a senior fellow at the Brookings Institution and critic of Mr. Trump’s attacks on law enforcement who has heard complaints from department lawyers. “But the sudden decision by large numbers of people to spend more time with their families is a creation of the atmosphere.”
Days after the health law brief was filed, a long-planned happy hour for former and current federal programs lawyers took on the feeling of a support group, according to people who attended. Gathered at an Irish pub near the Justice Department, colleagues told Mr. McElvain they were sorry that he was leaving but that they admired his decision.
Some maligned the Trump administration or poked fun at Mr. Sessions. But when political appointees joined the conversation, the career lawyers, worried about being pegged as dissenters, shifted the discussion to more neutral topics
Over 5Million Reads Adam Gonzalez at October 20, 2018 No comments: Links to this post