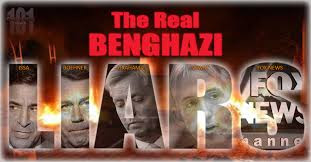 House Republicans were dealt a severe blow by a 339-page report from the Democrats on the Benghazi Select Committee who not only provided the evidence that Republicans have hidden but also detailed the Republican abuses and lies throughout the investigation.

House Republicans were dealt a severe blow by a 339-page report from the Democrats on the Benghazi Select Committee who not only provided the evidence that Republicans have hidden but also detailed the Republican abuses and lies throughout the investigation.

According to the report from the Benghazi Democrats:

The Democratic report also documents the grave abuses Republicans engaged in during this investigation—from A to Z. Republicans excluded Democrats from interviews, concealed exculpatory evidence, withheld interview transcripts, leaked inaccurate information, issued unilateral subpoenas, sent armed Marshals to the home of a cooperative witness, and even conducted political fundraising by exploiting the deaths of four Americans.

“In our opinion,” the Members wrote, “Chairman Gowdy has been conducting this investigation like an overzealous prosecutor desperately trying to land a front-page conviction rather than a neutral judge of facts seeking to improve the security of our diplomatic corps.”

“We are issuing our own report today because, after spending more than two years and $7 million in taxpayer funds in one of the longest and most partisan congressional investigations in history, it is long past time for the Select Committee to conclude its work,” they wrote. “Despite our repeated requests over the last several months, Republicans have refused to provide us with a draft of their report—or even a basic outline—making it impossible for us to provide input and obvious that we are being shut out of the process until the last possible moment.”

The Chairman of the Select Committee, Rep. Trey Gowdy, has consistently refused to release full transcripts of interviews. Gowdy has also refused to give Democrats on the committee access to information, or allowed them to help draft the final report.

Gowdy has also leaked inaccurate information in an attempt to help Republicans defeat Hillary Clinton. Rep. Gowdy illegally shifted the focus of the investigation away from Benghazi and on to Hillary Clinton’s emails. The chairman has interviewed witnesses without Democrats present and has treated the Select Committee like an arm of the Republican Party that is digging for opposition research on Hillary Clinton.

The Benghazi investigation has always been an attempt to bring down the Democratic presidential nominee. House Democrats on the Select Committee aren’t standing for it. They are popping the Benghazi conspiracy theory balloon and showing that the Republican investigation was a total sham.