In Brazil, Coca-Cola Turned An Anti Gay Expression Into A Symbol of Pride 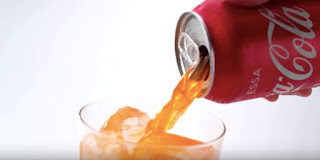 Just like in English, Spanish-speaking countries have different homophobic expressions for gay men. In Argentina, we’re “sword swallowers.” Spain calls us “pillow biters.” And in Brazil, the Portuguese expression is “Essa Coca é Fanta,” which literally translates to “That Coke is a Fanta.” But earlier this year Coca-Cola took that homophobic expression and turned it into a super cool, empowering campaign by filling cans of Coke with orange Fanta.
Being told “That Coke is a Fanta” might sound like a harmless idiom, until you realize the expression pops up everywhere in Brazilian culture: in memes, YouTube videos and social media. It’s used repeatedly to mock anyone deemed too expressive, flamboyant or not macho enough. Over time, it can wear you down.
Aware of the expression, Coca-Cola decided to produce cans of Coke with orange Fanta inside.
These special cans came in the customary Coca-Cola red, but printed in Brazilian Portuguese on the side they read “Essa Coca-Cola é Fanta — e dai?” (“This Coca-Cola is a Fanta — so what?”)

They released the can during Pride season in Brazil, and it was an immediate hit. LGBTQ Coca-Cola fans started discussing the drink in social media videos, making shirts with the slogan on it and even a very popular drag queen singer named Pabllo Vittar (she’s basically the Brazilian Britney Spears) made a video showing his delight.
Hundreds of millions of people saw and shared the campaign online, and Google searches for “That Coke is a Fanta” gradually changed from being grouped with other homophobic slurs to being grouped with “So what?,” “Pride” and other more empowering queries.
In short, Coca-Cola took a homophobic expression and turned it into a symbol of Pride.

Here is an ad showing the “That Coke is a Fanta” campaign:

Coca-Cola is the most popular soft drink in Brazil by far. And considering the largely queer-friendly country has an ongoing problem of violence against LGBTQ people, it’s great that Coca-Cola got people to reconsider their attitudes about queer people and show it’s pretty cool when that Coke is a Fanta.
Written by Daniel Villarreal
HORNET

Over 5Million Reads Adam Gonzalez at August 20, 2018 No comments: Links to this post