The New U.S. Apartheid: Remapping! Whites on Well to do Districts Break Away from Blacks 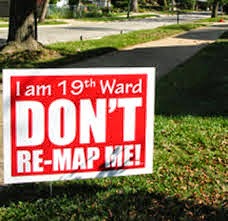 The private fund-raiser at the Louisiana Lagniappe, one of Baton Rouge’s finer eateries, seems a typically polite affair. Crab cakes and smoked salmon; jackets but no ties. You wouldn’t guess the people inside were plotting an urban remapping campaign that critics are calling a betrayal of 50 years of civil rights progress.

Fortunate residents of this the relatively prosperous southern section of a city that is otherwise blighted by poverty, violence and a failing public school system, they are demanding the right to break away from it and forge a whole new city of their own. Putatively named St George, it would measure about 85sq miles and would rob Baton Rouge of about 25 per cent of its population (and, of course, a chunk of its tax revenue).
And on this night, they have some good news. After months of struggle, the group has at last mustered the nearly 18,000 signatures required by the state for the issue to be put on the ballot when next Louisiana goes to the polls, or the time after. “The tide is changing, this will happen,” Lionel Rainey, the campaign’s spokesman, told the cheering guests. “We will get this on the ballot, we will win and we will create our new city.”
That remains to be seen. City officials have already vowed to file suit to block the petition the moment it is submitted. The objections range from the prosaic to the political and even moral. It has not escaped anyone’s notice that the area that would be St George is whiter and richer than any other part of Baton Rouge. Were it to become a city it would be 70 per cent white. Baton Rouge now is 55 per cent black and 40 per cent white.
Fighting the perception of racism may be the campaign’s biggest challenge. It surely doesn’t help that among the 50-odd at the restaurant last Sunday there is only one black face. Nor is there any sign of backing from local business. “They are concerned about taking a position on something so controversial,” admits Deborah Fernandez, a social worker who is attending with her husband. And blacks in the area, she says, are “afraid to present themselves”.
“We are being stereotyped as being white, racist or separatist but that’s a very predictable tactic,” Mr Reiney, the owner of a Republican political consultancy, said. “When you can’t argue on the merits you turn to calling the other side racist.”

An aerial view of Baton Rouge and the Mississippi River in Louisiana (Corbis)Supporters insist that above all this is about providing their children with a better and safer education. Only by creating a new city can they create their own school district.
“A lot of people say this is a black and white thing, but it’s not,” says Amy Bliss, 36, who backs the effort. “My children have a lot of black friends. It really frustrates me that they say it is about race.” Both her children, a son and a daughter, are in the public school system. Her daughter has been attacked by another student. Her son used to be so afraid of being bullied in the lunch canteen “he stood in the corridor and didn’t eat”, she says.
It is a sense of desperation among parents like Ms Bliss and her husband Josh about the state of the schools that has led them to make what by any measure is a daring gambit. No metropolis anything like the size of what St George would be has been hived off and incorporated in this way in modern US history. In short order it would have to find space for a city hall, build some new schools of its own and form a city government. Their plans call for starting out with only about 10 to 15 city employees, a tiny fraction of the numbers on the Baton Rouge payroll now.
The battle is being keenly watched by other cities for whom a break-up would create a troubling precedent, possibly encouraging citizens “on the right side of the tracks” anywhere to try to follow suit. The city leaders of Baton Rouge are already taking aggressive steps to stop it, notably by recently expropriating land beneath the booming Mall of Louisiana shopping centre that was to be part of St George and a large part of the new city’s tax base.
“It’s a land-grab. It’s like this is the Balkans and it’s absurd,” says Mr Reiney, while insisting that the loss of the mall won’t slow the campaign even though the city may snatch even more land. Baton Rouge, he reasons, would have reasons to be grateful for St George – it would be left with a smaller school district to manage and only by creating it will the current middle-class exodus from the whole metropolitan area be staunched.
Arguments that he and his cohorts are essentially turning back five decades of integration in the South do not much impress him. “I wasn’t alive during the civil rights era and desegregation. I don’t carry that baggage. It was a horrible time, but I can’t do anything about it. What I can do is try to make the present better.”

Derek Christian with his wife CarmencitaDerek Christian, the owner of a car paint shop on the side of Baton Rouge that would be left behind doesn’t look at the St George campaign through a racial lens but he is certainly opposed. “The better thing to do is try to make the city better,” he explains. “Any time you try to break away from something you weaken it – it doesn’t make it stronger. I think it will be destructive to both sides.” If the people on that side of town hate it so much, he says, “why don’t they just leave and live where they feel more comfortable?”
Joshua Fini, 25, is white and also lives in the northern part of town. “I think it’s about class,” he offers.
“They won’t say it but they don’t want their children mixing with poor people. It’s a terrible idea. It isn’t necessary and there is no legal reason to break up the city.”
If opponents of St George don’t evoke racism or even snobbery, they might just ask if its supporters aren’t guilty at the most basic level of selfishness, trying to cast off from the rest of the city without a care for what happens to it.
“My heart breaks for a lot of people who are now living in the city of Baton Rouge and especially for the children,” responds Mr Reiney. “But at some point you have got to ask, do you just let the whole ship go down? And when did it become a bad thing in this country to try and do right by your child?”
Breakaway districts: Prosperous suburbs split off
Similar efforts have surfaced in the past two years in Georgia, Alabama, Texas and Tennessee.
Trussville, Alabama, is a wealthy white suburb that broke away from the county schools system in 2005.
Two Birmingham suburbs have left the county system in the past two years. The small middle-class town of Gardendale, Alabama, voted in 2013 to secede from the Jefferson County school district and then to raise taxes on itself. About 88 per cent of Gardendale residents are white, while more than 42 per cent of Jefferson County residents are black.
Next autumn, the predominantly white Alabama community of Pike Road, with only 6,500 residents, will open its first school after splitting from Montgomery County Public Schools, where 83 per cent of its 32,000 students are either African-American or Latino.
In  Atlanta, Georgia, new districts have been proposed by Dunwoody, which is part of DeKalb County schools. Since the mid-2000s, six suburban, predominantly white areas outside Atlanta became cities.
In 2012, residents of Brookhaven decided to incorporate what had been a mostly white neighborhood in the 55 per cent black DeKalb County into their town.