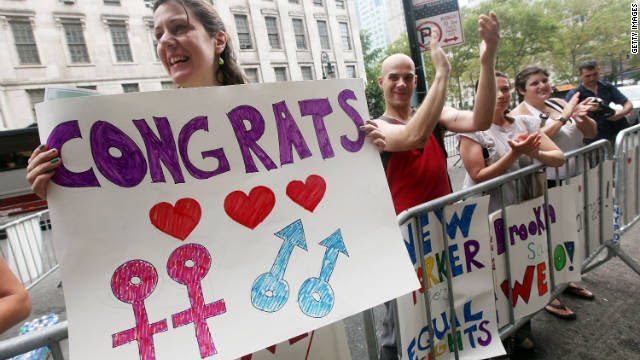 All legally wed gay couples, no matter which state they live in, are entitled to the same U.S. federal tax benefits as married heterosexual couples, the Obama administration said on Thursday.
It seems to me that we have reached the point with a gay friendly president and administration, including the people he has appointed for major departments, that gay married couples in which ever state can obtain most if not all of the federal benefits given to heterosexual married couples by the government. All that was on it’s way was DOMA and then to have enough states offering gay marriage for this to be possible and it is today.
We continue the fight that every state honors those marriages but more than that so that it’s citizens that are gay are not discriminated from getting married.

This is in thanks to the gays that wanted to be married but most of the weight against DOMA came from straights and gays singles like myself who do not see marriage in the cards. We are fighting for it because it is the right thing and because we don’t want discrimination attached to being gay. Those
gays that oppose it on self serving reason are just that selfish and are not the type of people that I would want to baby sit my dog (if I had one now). At times we have to see the better good particularly when we talk about history breaking chains that have bound us for centuries and with is there comes a bunch of other binds that attaches everyone.
Adam

The U.S. Treasury ruling, following a landmark Supreme Court decision in June, means that whether a married gay couple lives in New York, which recognizes gay marriage, or Oklahoma, which does not, federal tax benefits and responsibilities apply.
The Supreme Court on June 26 invalidated a key portion of a 1996 federal law, known as the Defense of Marriage Act, which had defined marriage as between a man and a woman.
There was some uncertainty after the Supreme Court ruling about how the tax status of gay married couples would be treated in dozens of states that have laws against gay marriage.
"Today's ruling provides certainty and clear, coherent tax filing guidance for all legally married same-sex couples nationwide. It provides access to benefits, responsibilities and protections under federal tax law that all Americans deserve," Treasury Secretary Jack Lew said.
There are about 130,000 same-sex married couples in the United States, according to estimates from the Census Bureau.
Gay rights backers said the ruling could prompt same-sex couples in states where gay marriage is not legal to travel to states where it is recognized to wed.
"We will see many more couples from the more than 30 states without marriage equality come to New York," said Nathan Schaeffer, executive director of the Empire State Pride Agenda.
APPLIES RETROACTIVELY
Under the ruling, effective September 16, gay married couples may file amended tax returns to change their filing status going back to tax years 2010, 2011 and 2012 to seek possible tax refunds, the Treasury Department said in a statement.
A Supreme Court ruling in June made California the 13th of the 50 U.S. states to recognize gay marriage. The District of Columbia also recognizes gay marriage. Thirty-five U.S. states have laws on their books restricting marriage to a man and a woman.
"With today's ruling, committed and loving gay and lesbian married couples will now be treated equally under our nation's federal tax laws, regardless of what state they call home," said Human Rights Campaign president Chad Griffin.
The ruling means legally married same-sex couples may choose to file their federal taxes as married filing jointly or married filing separately.
Marriage status under federal tax law brings both benefits and penalties. On the plus side, legally married spouses are exempted from the federal estate tax. On the other hand, some gay couples above a certain income threshold may face the "marriage penalty" that some heterosexual couples confront.
An anti-gay marriage group denounced the ruling.
"The Obama administration is intent on forcing same-sex 'marriage' on an unwilling public," said Brian Brown, president of the National Organization for Marriage.
STATE ISSUES
While the ruling brings clarity to federal tax returns, it could cause confusion for state returns filed by gay married couples in states that do not recognize their marriages.
In 24 of the states that do not recognize gay marriage, the law requires taxpayers to refer to federal tax returns, setting up a clash between state and federal authorities, the Tax Foundation, a conservative leaning think tank said in a report.
"Today's ruling will likely create administrative headaches for state taxing authorities in states that do not recognize same-sex marriages, because most state income tax regimes begin with federal taxable income as the starting point," Marvin Kirsner, a tax attorney at Greenberg Traurig, wrote in an email.
"States are going to have to issue guidance and I do think political opposition will arise," said Elizabeth Malm, an economist at the Tax Foundation, a free market think tank.
PUBLIC SUPPORT GROWS
President Barack Obama and many of his fellow Democrats back gay marriage, but the number of supporters in both parties has been increasing in recent years. Republicans were parties to the Supreme Court lawsuit over the Defense of Marriage Act, but were mostly quiet after the court ruled.
A spokesman for John Boehner, the Republican speaker of the U.S. House of Representatives, said he had no comment on the latest ruling announced by the Treasury Department.
Separately on Thursday, the U.S. Department of Health and Human Services said same-sex spouses would have access to coverage in the nursing home where their spouse lives under privately run Medicare health insurance plans.
Other government agencies are expected to make announcements soon to square their policies with the Supreme Court ruling.
For example, the Social Security and Veterans administrations have statutes that turn to state law in defining marriage. Gay marriage backers are awaiting clarification from those agencies on treatment of legally married gay couples.
Adam Gonzalez
(also source and Reporting by Kevin Drawbaugh and Kim Dixon; Additional reporting by Edith Honan)
Over 5.6 Million Reads Adam Gonzalez at September 01, 2013 No comments: