LGBT Student Shot, Killed by Campus Police Because He Would Not Drop a Knife


IN ATLANTA}} The attorney representing the family of a Georgia Tech student who was shot and killed by campus police late Saturday night is wondering why authorities didn't de-escalate the situation by non-lethal measures.
The family of Scout Schultz, 21, has hired trial attorney L. Chris Stewart to represent them.
The Georgia Bureau of Investigation has taken over the case, which happened when, according to the bureau, police responded to a 911 call at an 8th Street dorm about a person with a knife and a gun at 11:17 pm.
When officers arrived, they made contact with Schultz, who officers said was armed with a knife. Officers said they made multiple attempts to get Schultz to drop the knife, but that Schultz was not cooperative, and would not comply with the officers' commands.
They said Schultz advanced on the officers with the knife. When Schultz continued to advance and would not drop the knife, one of the officers fired, striking Schultz.
Schultz was transported to Grady Memorial Hospital in downtown Atlanta and died there.
Schultz was a fourth-year computer engineering student and president of Georgia Tech's Pride Alliance.
According to a family spokesperson, Stewart, who will hold a media briefing on Monday, is wondering why police didn't use non-lethal force to respond, and also wants to know if the officers who responded had any training to deal with mentally impaired subjects.
Stewart is managing partner of Stewart, Seay and Felton. Late last week, Stewart announced his firm had filed a lawsuit against a College Park mental health facility in connection with a teenage sexual assault that allegedly happened back in February.
The Pride Alliance released a statement Sunday afternoon:

Dear Pride Alliance members,
As you might have heard, last night we lost our President, Scout Schultz. We are all deeply saddened by what has occurred. They have been the driving force behind Pride Alliance for the past two years. They pushed us to do more events and a larger variety events, and we would not be the organization we are known as without their constant hard work and dedication. Their leadership allowed us to create change across campus and in the Atlanta community. Scout always reminded us to think critically about the intersection of identities and how a multitude of factors play into one's experience on Tech's campus and beyond.
We love you Scout and we will continue to push for change.

You can watch a viewer-submitted video from Maxim Mints of the incident below. It stops before the actual shooting itself. If you wish to watch the entire video that includes the shooting, please click on the link provided. In both instances, viewer discretion is strongly cautioned.

About 20 minutes later, the school informed students that there was no longer a threat on campus.


The GBI is continuing their investigation. Once they have concluded their inquest, the results will be presented to the Fulton County District Attorney's office for review and any additional action.


Students stood outside watching police gather evidence shortly after the incident on 8th Street outside the West Village building. Georgia Tech gave students a play-by-play on Twitter, alerting students at about 11:30 pm to seek shelter in a secure location until further notice.

Over 5.6 Million Reads Adam Gonzalez at September 19, 2017 No comments: Links to this post

General view of the Pre-Game Show as fireworks are set off prior to Super Bowl XXXIV between the Tennessee Titans and the St. Louis Rams at the Georgia Dome on January 30, 2000 in Atlanta, Georgia. (Photo by Tom Hauck/Getty Images)
Atlanta’s chance to host a Super Bowl could get sacked by an anti-gay rights bill now on the governor’s desk.
The National Football League warned that if the legislation becomes law, the city could miss out on hosting one of three upcoming Super Bowls.
“NFL policies emphasize tolerance and inclusiveness, and prohibit discrimination based on age, gender, race, religion, sexual orientation, or any other improper standard,” said NFL spokesman Brian McCarthy. “Whether the laws and regulations of a state and local community are consistent with these policies would be one of many factors NFL owners may use to evaluate potential Super Bowl host sites.”
The Georgia legislation would let churches and pastors refuse to perform same-sex marriages. It would also let religious organizations fire employees whose practices or religious beliefs clash with their own. Critics of the bill argue that it would allow widespread discrimination against members of the LGBT community.
The bill, which passed last week, was a response to the Supreme Court ruling to allow same-sex marriages nationwide.
Atlanta is a contender to host the Super Bowls in 2019, 2020 and 2021, along with South Florida, Tampa Bay, New Orleans and Los Angeles. NFL owners are slated to vote on host cities in May.
Atlanta is currently building a new NFL stadium with the help of an estimated $600 million in state and city tax dollars. The arena, called Mercedes-Benz Stadium, is set to finish in time for the 2017 NFL season. The NFL typically cities rewards that build new stadiums by letting them host a Super Bowl.
Georgia Gov. Nathan Deal, a Republican, has not said whether he’ll sign the measure. He did oppose an earlier version of the bill. But this version passed both houses of the Georgia legislature with enough support to override a veto.
Business groups opposed to it are pointing to the NFL’s statement as proof that such a law would hurt the Georgia economy.
But at least some of the law’s supporters balk at bringing football into the equation.
Don Hattaway, a Cartersville, Ga, Baptist pastor and the former president of the Georgia Baptist Convention, tweeted that state residents are being told to give up their religious freedom in order to host a game.
This isn’t the first time the NFL used the Super Bowl to flex its political muscle. The league moved the location of the 1993 Super Bowl from Phoenix to Pasadena, Calif. after Arizona rescinded a state holiday to honor Martin Luther King in 1987. The Super Bowl returned to Arizona in 1996, after the state reinstated the martin Luther King holiday.
But the NFL doesn’t always use the Super Bowl’s location to weigh in on debates. For instance, it didn’t heed calls to move the 2017 Super Bowl out of Houston after voters repealed an LGBT-rights law last fall.
NEW YORK (CNNMoney)
Over 5.6 Million Reads Adam Gonzalez at March 25, 2016 No comments: Links to this post

Cops with canines, rainbow bracelets and plenty of smiles walked, drove and dished out some swag in the Atlanta Pride parade on Sunday.
The contingent of gay officers from Atlanta police and MARTA, along with at least one Atlanta firefighter, came armed with a float too, like they did for the first time last year. The group included the two LGBT liaisons for Atlanta police – Brian Sharp (top photo) and Eric King, who was appointed in early August.
projectq.us 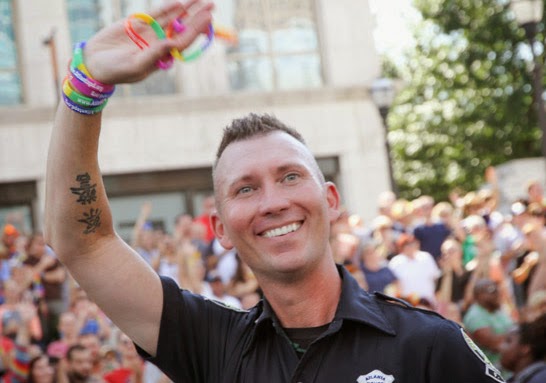 The 44th year for Atlanta Pride offers a lot of tradition.
"We just come out with family and friends to celebrate what we do every single day that's not supported by every body," explained McKenzine Ellis.
This year, the support is a little greater.
"Overwhelmed, emotional. I was an emotional mess last night after we found out," recalled Jason Winkler.
He's reacting to a decision made in his home state of North Carolina late Friday. It became the latest state to strike down a ban on same sex marriage. As a result, Winkler and his boyfriend Darryl Rogers are getting married. However this wasn't a quick engagement.
"We've been together twenty-one years so it just makes it legal and the same protections and the same rights. It's love," Rogers said.
With North Carolina's ruling, states that offer the freedom to marry same sex partners outnumber states banning it. Georgia is among those with the ban, but some believe that will change.
"Georgia is so close. We're getting there. I want to marry a girl here where I was born and raised. I would love to be able to get married to a girl here. I think that will absolutely happen," said Kayla Ellis.
That hope is something that makes the crowd at Atlanta Pride feel even prouder.
11alive
Over 5.6 Million Reads Adam Gonzalez at October 16, 2014 No comments: Links to this post