A Liberian Slum Takes Ebola into their Hands 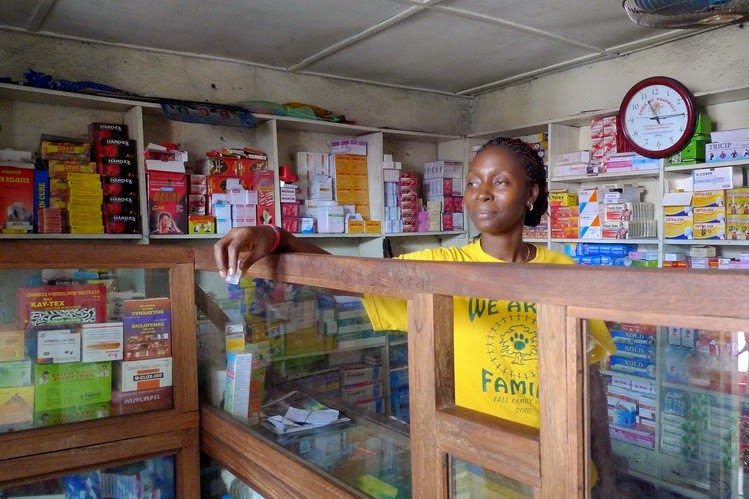 Pharmacist Doris Nyenkan takes money from a customer at her store in the West Point slum in Liberia's capital. She says that since the Ebola outbreak started she stands far back from her customers to avoid contact. HEIDI VOGT/THE WALL STREET JOURNAL

MONROVIA, Liberia—Two months after Liberia’s largest slum fought a government-imposed Ebola quarantine, residents are in a desperate push to conquer the deadly virus—with or without the government’s help.
It is a marked change from August, when many in West Point argued Ebola was a hoax and some residents even dumped the highly contagious corpses of Ebola victims into a nearby river to avoid handing them over to the government’s body-collection teams.
Ebola is still spreading through West Point, but so are changes to habits and traditional practices that offer a glimmer of hope in an impoverished country’s fight against the deadly virus. The shift is also key to the international effort to contain the disease.
West Point isn’t the only place where attitudes are shifting, but it is particularly remarkable because the slum—where more than 50,000 people live in closely packed tin-roofed shacks—is one of the poorest districts of the capital city and because the government almost gave it up for lost.
When President Ellen Johnson Sirleaf imposed the quarantine in mid-August, Ebola was threatening to consume the slum. Angry about being sealed off and abandoned by the government, residents of West Point rioted in anger and overran a school that was being used as an Ebola holding center.
Ebola is a highly contagious virus, but only if you come into contact with certain bodily fluids of those infected. What do scientists know about how it's transmitted? WSJ’s Jason Bellini has #TheShortAnswer.
Mrs. Johnson Sirleaf lifted the quarantine after 10 days, but the measure became a catalyst for the community. When the lockdown ended and international aid organizations poured into West Point with bleach, rubber boots and information, community leaders decided they needed to take action fast.
Prince Mambu, the head of a community group called Health Education, Sanitation and Sensitization Group, started going house to house talking with people who have had contact with victims. It is now routine. He reminds his neighbors to stay in their houses and asks about symptoms.
“I ask them, ‘Do you have a headache?’ But also I watch their eyes. Sometimes they say no but if I detect that they look weak, I will report it to the others. If they are willing, I will call for an ambulance,” Mr. Mambu said.
The group also spreads the sanitation message throughout the community: Wash your hands with a bleach solution. Don’t touch anyone who is sick.
Streets police once blocked off to pedestrians and cars now teem with local residents recruited as workers to distribute bleach and hand out advice. One recent afternoon, 22-year-old Mechie Seih told charcoal seller Mamie Kollie how to lower infection risk if a family member falls ill: “You put clean plastic bags on your hands. You wear a thick jacket with long trousers. You put shoes and socks on your feet.”
Ms. Kollie nodded. She is being careful: Already outside her shop is a bucket of chlorinated water for washing hands. A woman selling dried fish nearby said she had stopped eating meat from animals like monkeys and rodents—commonly called bush meat—a suspected source of infection. A few doors down, a barber said special body-collection teams are receiving calls from families when someone dies. 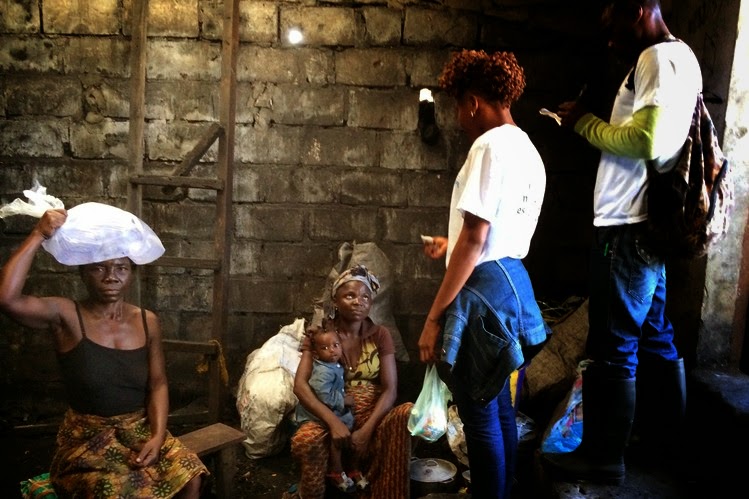 Pharmacist Doris Nyenkan says she now tells customers complaining of fever to get tested for Ebola. She also now stays a few feet away from customers and washes her hands at least once an hour.
“People clean their homes every day now. Now they are washing their hands, buying this gel,” Ms. Nyenkan said, pointing to a bottle of hand sanitizer. “Before Ebola you didn’t see people doing such things.”
Such steps are important: The Liberian man who brought Ebola to the U.S. contracted it in Monrovia when he tried—without proper protection—to help a pregnant neighbor who had fallen sick.
The Liberian government isn’t absent from West Point: The clinic here is helping triage patients and government workers are among those handing out information and collecting bodies.
Tolbert Nyenswah, the head of the Liberian government’s Ebola response, applauded West Point as one of a few Monrovia neighborhoods where residents have taken charge of the effort.
“They have their own active case finding, and they are quarantining households and checking for strangers. If people are sick, they report that to the call center,” Mr. Nyenswah said.
But many in West Point say they are taking responsibility because the government deserted them. Even now, they would be much worse off had they depended on the government.
“During the quarantine, medical teams were not coming here. There were no ambulances, things were just terrible here,” Mr. Mambu said. It is better now, but the government is still too slow to respond: Ambulances sometimes take a day to arrive, he said.
Now, when West Point residents need an ambulance, many call Kenneth Martu —who works for a U.S.-funded charity that hired a private ambulance. Mr. Martu’s ambulance team averages about 10 calls a day and gets to people within about 30 minutes of the call, he said.
The charity, called More Than Me, ran a school for girls from West Point before the Ebola outbreak. Now, it is paying for nurses to do rounds in West Point and providing lunch for Ebola response workers, in addition to sponsoring the ambulance service.
The sad reality is that it still may not be enough. Mr. Mambu has tracked Ebola deaths in the community and says that although the numbers have gone down in recent weeks, bodies are still being carried away every day. Even though those who have had contact with Ebola patients are told to stay home, Mr. Mambu said no one is dropping off provisions, so many still go out in the evening to buy food.
And some are still treating their sick at home because of fear or lack of beds at centers.
Paris-based Doctors Without Borders is distributing home-care kits in West Point and other neighborhoods so those who are treating their sick at home don’t have to resort to covering their hands with plastic bags. That is itself an acknowledgment of failure to get people into treatment centers.
“The key is—in addition to the community being aware of how you get the disease and what the symptoms are—is find the sick person as fast as possible and put them in isolation in a treatment center,” said Laurence Sailly, the emergency coordinator for Doctors Without Borders in Liberia.
With Ebola, she said, “one case is an epidemic.”
HEIDI VOGT
online.wsj.com

Over 5Million Reads Adam Gonzalez at October 25, 2014 No comments: Links to this post