👼
A devout churchgoer aged 88 has become Britain's oldest stalker after he became infatuated with a younger woman he met through their shared interest in the Bible.
Widower Frank Chadwick had hoped for companionship with Sheila Thompson, 54, after the death of his wife just before their 50th wedding anniversary.
But after the pair had a cup of tea together, Chadwick - who is partially deaf - began hounding accountant Miss Thompson over a period of two years.
He asked if could volunteer at a community centre where she worked, but concerns were raised when he began following her to church on a Sunday.

When the pensioner was asked to leave the community centre after he admitted the only reason he went was to see Miss Thompson, he began hand-delivering cards, letters and gifts to her home in Salford, Greater Manchester.
He was eventually reported to police after being seen repeatedly lurking around her cul-de-sac - forcing Miss Thompson to hide behind the curtains to avoid him.
In a statement Miss Thompson said: "Due to his behaviour I am still keeping the blinds shut in my living room as he could still see me if I sat in my chair.
"When I approach my house, I check I have my keys ready and check he is not lurking in the area. I avoid answering the phone or door unless I know who it is. I have to consider what he may do before I do things myself."


At Manchester Magistrates' Court, Chadwick of Westhoughton, Bolton, admitted a charge of stalking without fear, alarm or distress and was banned from contacting Miss Thompson for 18 months under the terms of a restraining order.
He was also conditionally discharged for 18 months.
The incidents began in 2016 after Chadwick met Miss Thompson after they bumped into other whilst they were out walking in the Salford area.
At the time he had a Bible in his hand after being asked to research a question posed by his vicar and she offered to help.
Prosecutor Lynn Rogers said: "The two met by complete chance. She was out walking in February 2016, when she saw him and they started to chat, and they had a cup of tea together and arranged to meet for lunch.
"She took him to a local centre where she works as a volunteer. He asked if he could also volunteer but was told it would not be appropriate.
"He followed her to her place of worship, and would send her hand-written letters, and hand-deliver them through her front door.
"At the centre, he was spoken to by staff and asked him if the reason he wanted to volunteer for them was because he wanted to be close to her and he said 'yes'. He was told not to attend the centre any more.
"He was reported in 2016 and March 2017, as she saw him walking down her cul-de-sac. He went up to her house and he knocked on the door and rang the bell to try to contact her. She remained in her house and the curtains were drawn in the front.
"She said he was seen by a neighbour and he was loitering around the area, and posted letters and a book through her door."
Chadwick later attended a police station on August 21, 2018 where he was arrested. In mitigation defence lawyer Mr Adam Whittaker said: "He had impeccable character and it is unfortunate we have to be in this situation today.
"He just didn't understand what has happened. He does have difficulties with hearing, and he communicates by letters.
"He lost his wife on Christmas Day a few years ago, just as they were approaching their 50th wedding anniversary and she was his life companion.
"His family have grown up and he finds great comfort in the church. On the first meeting with her he had his Bible, and he was working on a question from his minister.
"She approached him and spoke to him first. After they swapped numbers, she contacted him after that and they met for lunch. They went to each other's place of workship.
"He felt there was more to this friendship than there actually was. He wanted to see her.
"She told him to then not contact her for three months and he thought maybe that would salvage their friendship. He didn't know why or what he did wrong. He just sought after companionship.
"This has gone on for a period of around two years. He has a good character and entered an early guilty plea.
"He has no previous convictions. Probation do not need to be involved with a man of 88 years of age."
District judge Khalid Qureshi dismissed the need for punishment, and said: "There was no malice involved and there was no threat, it was just the persistence of the matter, and the letter is very well written - you pleaded guilty at the first instance.
"I will make this a conditional discharge for 18 months. In terms of the restraining order, you must not go to her address or contact her in anyway way whatsoever. The restraining order will be in place for 18 months."
In 2016 retired bookie Andrew Trimble, 81, of Garrowhill, Glasgow was placed under supervision for stalking May Fernie, 79. in the same year former sailor Colin Bagot-Hodgson, 78, of Blackburn, Lancs, was given a suspended sentence after harassing a 73-year old woman suffering from cancer with letters, cards, magazines and gifts.
Over 5.6 Million Reads Adam Gonzalez at September 15, 2018 No comments: Links to this post

A 40-year-old psychiatric patient who allegedly stalked CNN's Anderson Cooper for five years, including making unsolicited calls and trying to kick down the front door, has been charged.
Convicted felon Alex Hausner, from Queens, faced court last night accused of making unwelcome phone calls and trying four times to see Cooper.
Last month, the 'gay, Jewish white supremacist' allegedly attempted to kick down the front door of the anchor's four-story West Village residence which he shares with boyfriend Benjamin Maisani.
According to court papers obtained by the New York Post, security cameras captured Hausner's vicious attempted break-in.
'I swear to f--king God, don’t insult me. I’m going to f--k you up!' he can be heard screaming while kicking the door to Cooper's $4.3 million converted firehouse.
Sitting in Manhattan Criminal Court last night before his arraignment, Hausner told New York Post Cooper's partner Maisani was behind the 'untrue' allegations.
'I can prove from my sources that his boyfriend [Maisani] has sent people after me,' he said.
'He’s a thug and a mongrel. They said I was not to be there — that’s not true.'
According to court papers, Maisani, an East Village bar owner, is also being treated as a victim.
Hausner was last night ordered held in lieu of $75,000 bail on felony first-degree menacing, and misdemeanor harassment and stalking. 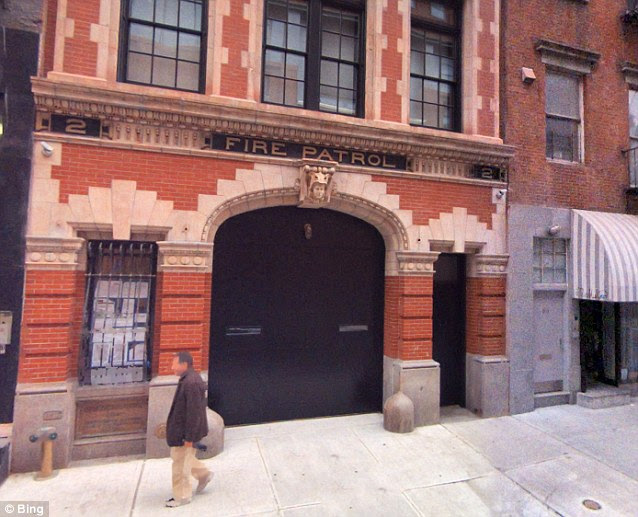 The court heard Hausner was 'told on numerous occasions not to call' Cooper and also showed up at the house on June 22 without permission. prior felony and misdemeanor convictions, she said.
He also reportedly had prior felony and misdemeanor convictions.
'He was a radical — he believed in his [Jewish] religion, and he believed in the one race, the white race,' an ex-neighbor at Hausner’s SRO told New York Post.
The publication said Cooper’s legal representative, Jason Berland, declined to comment.
This isn't the first time Cooper has been terrorized by an alleged stalker.
In 2008, he explained on-air during a 'Live with Regis and Kelly' guest spot that a woman showed up to this apartment that morning unannounced with bags, ready to move in, according to Huffington Post.