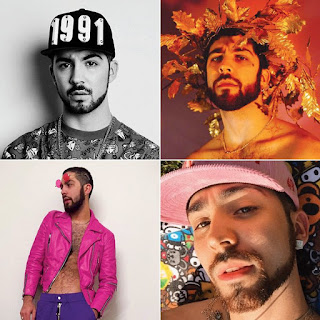 This page was written bY R. KURT OSENLUND was published today on Out.com

Rembrandt Duran was 23 when he stopped pursuing women. “I was like, 'Let me try this whole gay thing for a bit,'” he says. The gay thing stuck, and in the two years since, Duran has had sex with more than 550 men. He admits that his promiscuity is at least partially fueled by gay repression. “Maybe it’s come from being ashamed and wanting to keep it ‘on the low’ or whatever,” he says. “But now I’m the opposite—I’m shouting it to the world.” And that includes on social media. If you follow Duran’s private Instagram account, be careful opening it in CVS: the person behind you might think you’re logged onto PornHub.
Duran’s penis has made him popular on Grindr and Scruff, but that didn’t always jell with the rest of his appearance. “I used to dress like the Mexican version of Prince,” says the 25-year-old New Yorker, who was formerly in fashion—his caps have been worn by Missy Elliott and Will.I.Am—and describes himself as a “handsome, pretty, queer Mayan Dutch Jew.” He continues, “I had pink clothes, long hair, and huge hoop earrings. But with men, that didn’t work. They’d love my nudes, but I’d walk in the door and they’d say stuff like, ‘Maybe next time leave the earrings at home.’ ” Compromise has become part of the game for Duran, who freely acknowledges that he’s playing a role. Growing to resent his look, he’s cut his hair, ditched the bold clothes, and embraced his “masc” side. He’s even had a New York Mets logo tattooed on his face. “I’ve established myself in a certain scene as being trade-adjacent,” he says. “And I’ve definitely grown more aware of what certain guys are into. I give them a gay street-dude fantasy—the best of both worlds.”
As Duran has gained more attention, and become more public and unabashed with his alpha-gay persona, he’s allowed sex to permeate most aspects of his life. Capitalizing on his assets and a growing rolodex of partners (at one point, his phone’s media scroll was organized by bottoms, tops, fetishes, and sex videos), he’s both worked at and organized sex parties, private and public, in Brooklyn and Manhattan. He’s also served as an escort and a “sex matchmaker,” he says, uniting partners via his catalog of flesh, and never allowing any personal attachment to get in the way. “A lot of guys like to keep their friends and their hoe lives separate, and they feel like they can’t be friendly to people they have casual sex with,” he says. “It’s all the same to me. I’ll stay in communication with people and hook them up with hot bottoms or hot tops. I don’t mind if they do it without me.”
Though desired and dominant, Duran doesn’t consider himself sexy. “I’m cute, I’m high energy, and I’m fun,” he says of his appeal. And while any exhibitionist is surely seeking some level of validation, what Duran continually comes back to in conversation is a drive to de-stigmatize sex. “I want people to be like, ‘I had a really good morning; I had really amazing sex’—the same way you’d say you read a really great book,” he says. “Good sex is part of a good day, and it’s not something we should feel uncomfortable talking about or hearing about. It’s society that's made it into something dirty.”
The same goes for Duran’s views on protection and STDs. He is HIV-negative, is on PrEP, and gets tested once a month, if not twice. He confesses he’s not big on condoms, but he’s open with partners and tends to let them steer. “I’m speaking from a place of top privilege, and I understand that,” he says. “If someone asks me to use a condom, that’s important. I want people to feel comfortable—it makes the whole thing sexier.” Duran has contracted chlamydia five times and gonorrhea twice, and, without endorsing such things, he wants to knock out their stigmas, too. “Many STDs and STIs are more manageable than common infections, like a cold or the flu,” he says. “They’re only viewed so harshly because they’re tied to sex. That’s why people get HIV—they sleep with people who don’t get tested because they’re afraid. It’s a social problem. Give me gonorrhea, I’ll get a shot, and it’s gone the same day. Give me chlamydia, I’ll take two pills, and it’s gone in two days. Give me the flu, and I’ll be off my game for two weeks—and I probably won’t ask for a second date.”
Over 5Million Reads Adam Gonzalez at March 27, 2017 No comments: Links to this post

David Beckham famously put the sex factor back in to white pants after posing in them for Armani.
And now Essex’s answer to Golden Balls - Mark Wright – has proved once again that pants can be sexy as he posed in a pair of tighty whities on a shoot in Spain.
The 26-year-old gave the footballer a run for his money as he showed off his impressive and slightly wet body as he pulled a variety of poses poolside, in images that are sure to make many other men swoon. 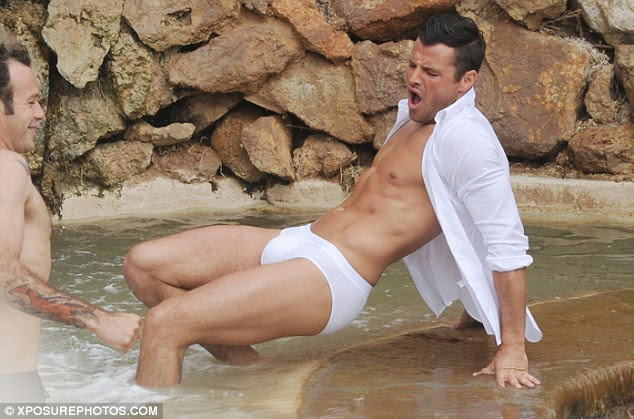 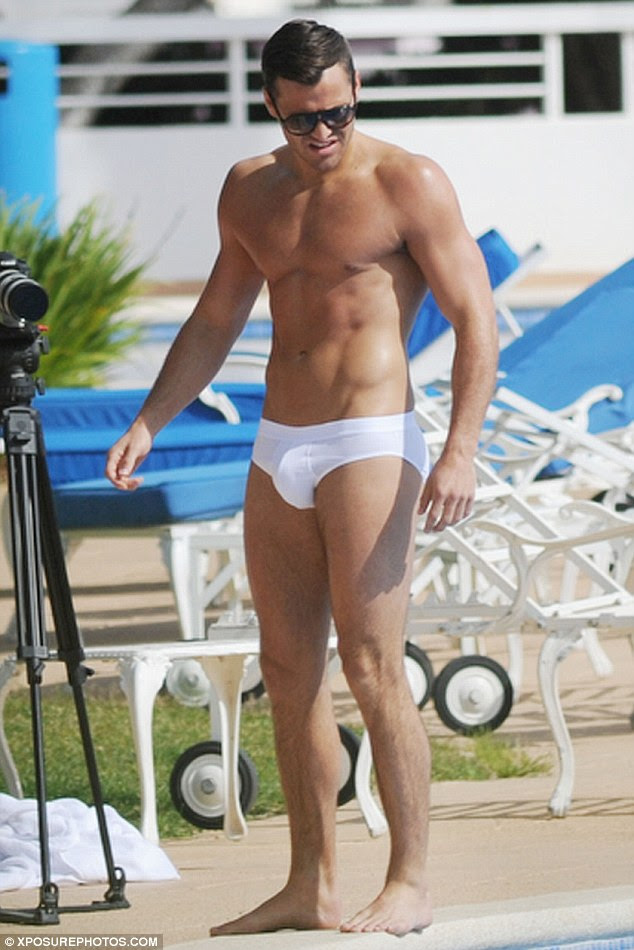 Once he was wet, he posed like having an orgasm and at one point a very lucky assistant can be seen touching up his legs with make-up as he s It It’s not all pant shots though as he is also seen standing by the pool with a pair of black trousers slightly undone revealing his white briefs beneath.
Judging by the images, it is clear Mark, who is currently dating Michelle Keegan, has been working out as there is serious muscle definition going on around not just his stomach area but also on his arms and legs. 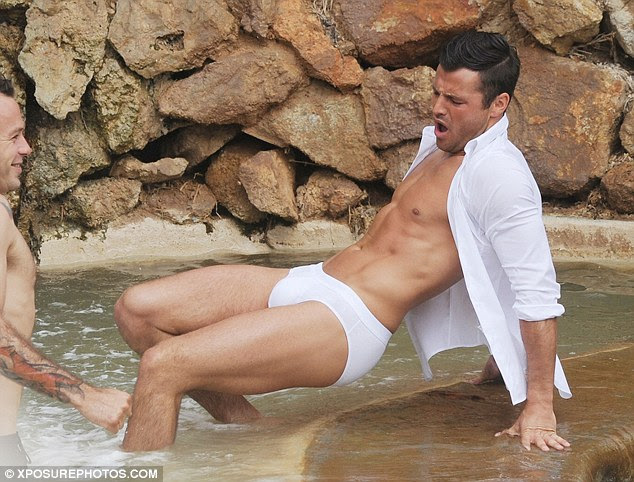 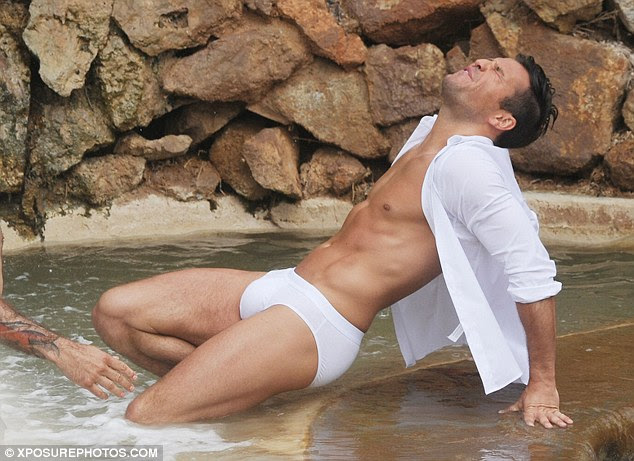 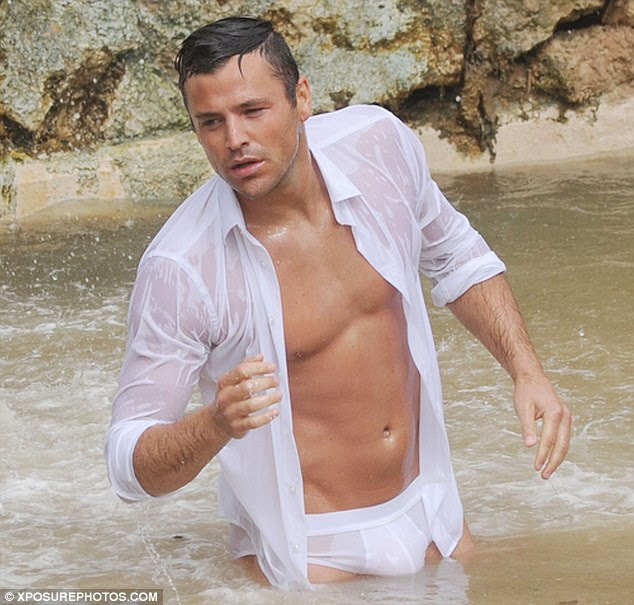 Over 5Million Reads Adam Gonzalez at April 21, 2013 No comments: Links to this post


By Admin. Under * International,   I picked this Particular model to show because he shares my  name…that’s all :)

P
Striking Thai model, Chaiwat Thongseng, is the new spokesmodel for “Adam’s Love,” the source of AIDS information for Men who love Men in Thailand. Photographed by Haruehun Airry.

Over 5Million Reads Adam Gonzalez at March 20, 2013 No comments: Links to this post

Francisco Lachowski has confirmed his sexuality for the first time to gay newsmagazine The Advocate.

The highly sought-after Brazilian-Polish Ford model, who has appeared in campaigns for designers from Gucci to Versace, will give his first interview to The Advocate after many denied requests.

The Advocate and other media had previously criticized Lachowski, 20, for not confirming what many have called the "open secret" of his sexual orientation. Prior to his coming out, he was linked to Yana Dwyer.

The Advocate will release Lachowski's statement - along with a photoshoot by Rion Sabean - in their February 2012 issue.

While we are on the subject of coming out... Roberto Silverio is also out They get younger and younger. Someone most’ve paved that road…..Im just saying..but believe me some want to pay back which will be the paved road right to jail.    adamfoxie* 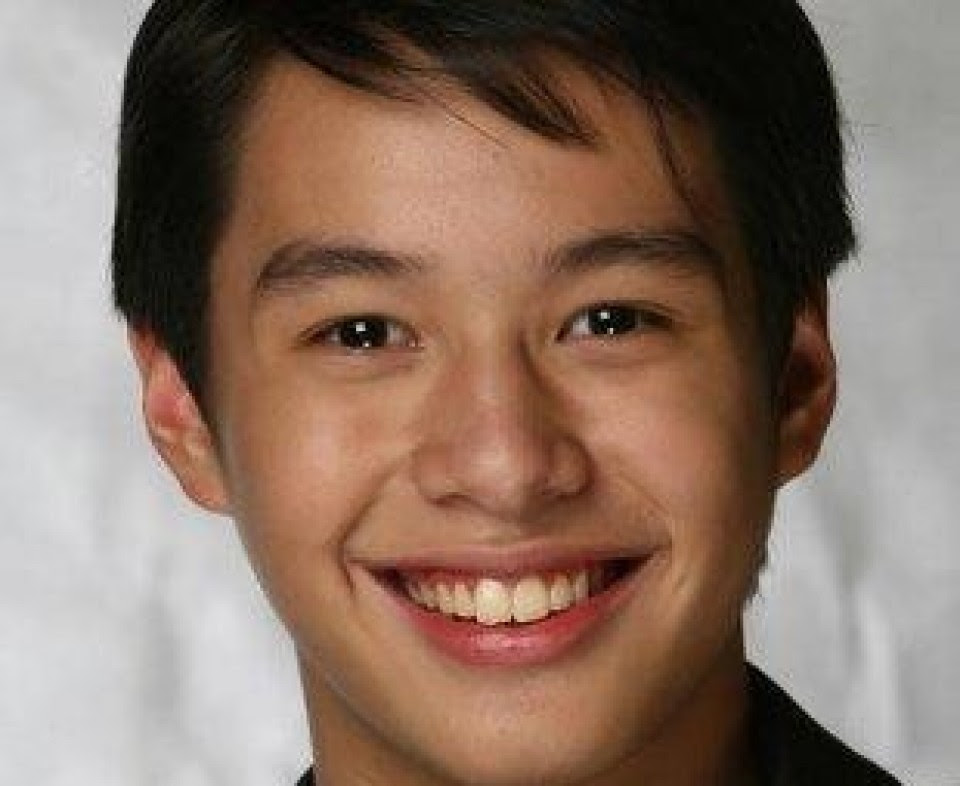 I guess that says it all. I am “Jack, The Master Of All Trades” in this blog.

I made this to further enhance my writing and creative skills, to feature friends, to serve as a hobby for me.
I am a movie writer by profession. Spent almost 30 years as a writer/columnist in magazines and tabloids. And now, trying to venture into blogging.
Something new for me, I guess.
It challenged me a lot.
It’s like a new-found freedom,
Thus I created this blog.
A sweet revenge for me? Maybe not, maybe yes.
But nothing personal now for me this time.
Just doing things positively, productively.
Doing things that I can be proud of, featuring people worthy to be publicized,
worthy to be seen-
and worthy to be recognized, in their own little way.
It’s like an advocacy on my part.
I just do things on my own, and not linger with the past.
And I am happy just the way I am.
FOR THOSE WHO WANTS TO KEEP IN TOUCH…., text me at 0927-6012718.
FOR THOSE WHO WANTS TO BE INTERVIEWED BY ME: TEXT ME, TOO.
or email me at: silveriorobert@yahoo.com or robert_silverio08@yahoo.com
I can cover events and write about them, I can do travelogues, I can write feature articles,
anything about writing, I can do.
SET AN INTERVIEW WITH CELEBRITIES, I ENJOY THAT. LET’S HAVE COFFEEE. I LOVE COFFEE.
Feel free to keep in touch.
Mwahhhhhhhhhhhhhhhhh.
http://sssip.wordpress.com


Over 5Million Reads Adam Gonzalez at December 31, 2012 No comments:

Email ThisBlogThis!Share to TwitterShare to FacebookShare to Pinterest
Labels: Coming Out, International, Modeling

...was hotter than this.

They really thought that THIS...

...could even COMPETE with THIS.

Image by Sonia Recchia / Getty Images
Or be as Green as This?

Over 5Million Reads Adam Gonzalez at November 15, 2012 No comments:

Dedicated followers of David Beckham's underwear modelling career will know that this is the third collection of the LA Galaxy star's H&M pants range. 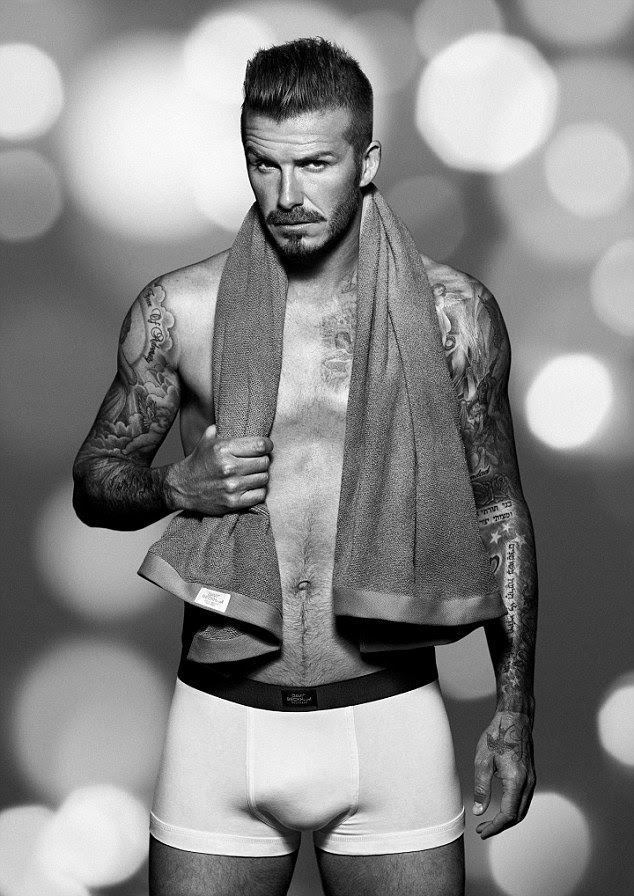 Beckham, a savvy user of Facebook, posted two of the photographs on his page - which has a staggering 21 million fans - this morning.
Just half an hour later, one of the photos had been 'liked' almost 55,000 times and had generated hundreds of comments.
The star launched his first underwear collection with H&M in February earlier this year - and caused mass hysteria when he appeared at a London store to unveil the range.
photographer Alasdair McLellan. 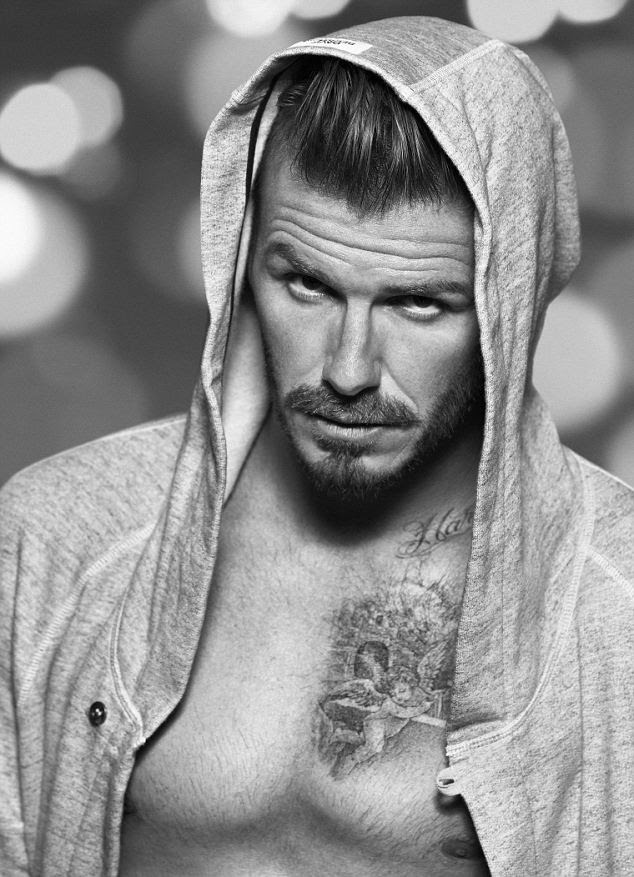 'I am so excited about this campaign for David Beckham Bodywear at H&M,' David said of the range. 'I love the range, and feel so comfortable in each of the pieces. As soon as the collection was launched, it became second nature for me to wear it!' he added.

'I wanted to express the strength and quality of the David Beckham Bodywear collection with these images, and also the wearability and fit.' 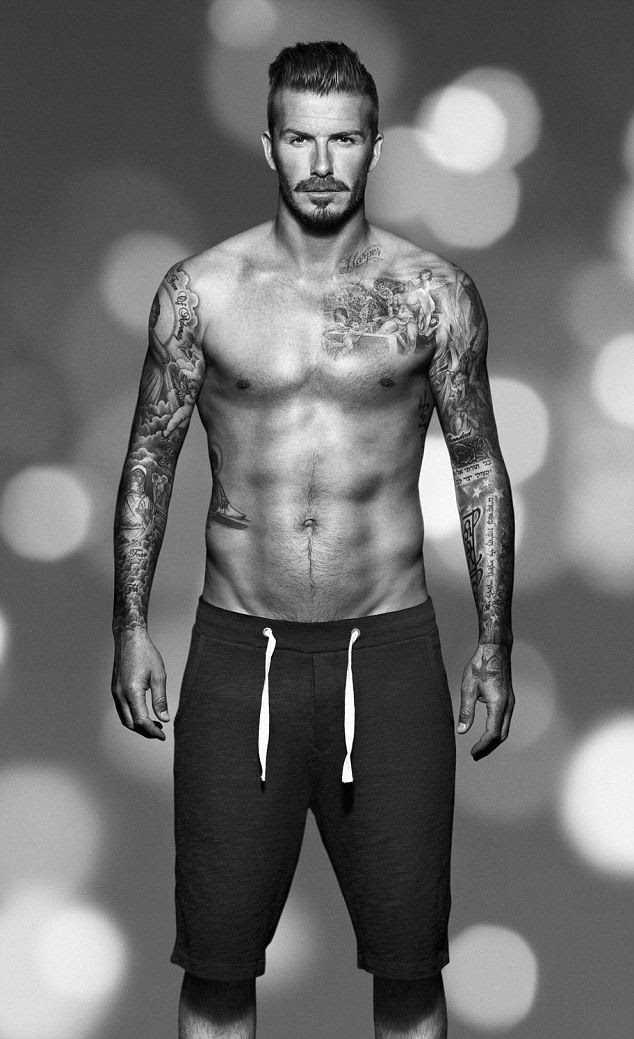 Over 5Million Reads Adam Gonzalez at November 08, 2012 No comments: